Excerpts from a report on Jun 11 in Democracy Now (The original content of this program is licensed under a Creative Commons Attribution-Noncommercial-No Derivative Works 3.0 United States License. Please attribute legal copies of this work to democracynow.org.)

AMY GOODMAN: For more on the mass uprising engulfing the U.S. and what protesters are demanding now, we go to Los Angeles, where we’re joined by Robin Kelley, professor of African American studies at UCLA. He studies social movements, author of many books, including Freedom Dreams: The Black Radical Imagination. . . . 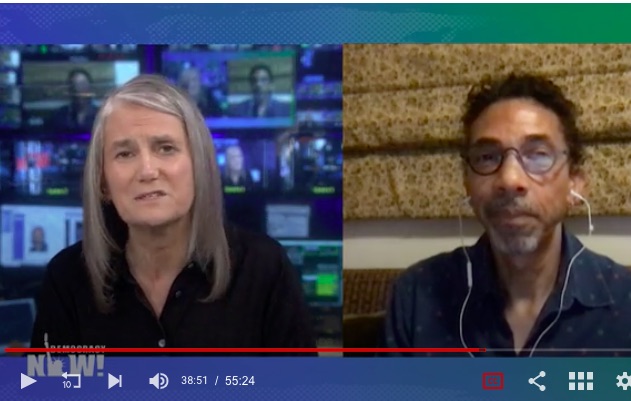 NERMEEN SHAIKH: Professor Kelley, I want to go back to something that you  wrote  immediately following Trump’s election in November 2016. You wrote that the U.S. needs a multiracial movement committed to, quote, “dismantling the oppressive regimes of racism, heteropatriarchy, empire, and class exploitation that is at the root of inequality, precarity, materialism, and violence in many forms.” You’ve just talked about how the demands of this movement are very different. Do you see what’s happening now as what you wanted to happen in November 2016?

ROBIN D.G. KELLEY: Exactly. And not only that, but what I wrote in 2016 was actually a reflection of what was already happening on the ground. So, in some respects, remember, the Movement for Black Lives put out their policy platform in August of 2016.

And one of the things we all have to acknowledge is that we’re not here by accident. You know, this is not a spontaneous response to the pandemic, and suddenly white people are waking up and saying, “Oh, wait a second, Black lives matter.” No, this is a product of enormous work, going back well before Trayvon Martin. But you think about all the organizing work, the Movement for Black Lives, Black Lives Matter, the women who organized Black Lives Matter, initiated — Opal Tometi, Alicia Garza, Patrisse Cullors — people like Melina Abdullah, Charlene Carruthers of Black Youth Project 100, all the scholar activists who have been working on this question — Barbara Ransby, Kimberlé Crenshaw, Angela Davis, Ruth Wilson Gilmore — and then, before that, the Malcolm X Grassroots Movement, Copwatch, Dignity and Power, Critical Resistance, the African American Policy Forum. These were initiatives on the ground who did all this political education, all this organizing work — We Charge Genocide, Dream Defenders, the Rising Majority, Black Organizing for Leadership and Dignity, and also groups like SURJ, you know, [Showing] Up for Racial Justice, which deals with white racism.

So you have an infrastructure in place that has been doing this work for a decade or more — more than a decade. And that’s why people are out here. That’s why people can come out into the streets and simply roll off their tongues words like “defund the police,” connect transphobia, homophobia, gender oppression, patriarchy to racial capitalism and to racial violence, connect these things in ways that I think are kind of unprecedented. But again, without the organizing work, we would not be here, you know? And I think it’s very important to even go back and acknowledge how the foundations were laid by the Combahee River Collective, by people like Barbara Smith, raised by the Third World Women’s Alliance, I mean, fighting around questions of connecting sterilization, abortion rights with racism. You know? So, these kinds of links, these connections — and also with war — are important. So, there’s a long history that got us here.

And the real question now is whether or not this can be sustained, because we know, throughout history, we’ve had revolutionary moments, after Reconstruction in the 1870s, followed by backlash and by what we can describe as American fascism. We have the sort of Second Reconstruction of the 1960s, followed by backlash, the rise of the Klan, the tamping down on the strike wave in the 1970s, neoliberalism. And now we’re facing another one. We have these forces trying to transform the world in a way that could actually bring safety and prosperity to all versus a president and a regime that asks, “What happened to Gone with the Wind? …