Tens of thousands of demonstrators amassed in Washington and other U.S. cities on Saturday [June 6] demanding an end to racism and brutality by law enforcement, as protests sparked by George Floyd’s fatal encounter with Minneapolis police stretched into a 12th day. 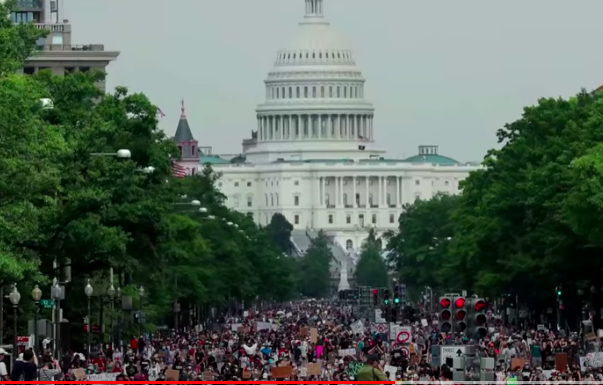 A Lincoln Memorial rally and march to the White House marked the largest outpouring yet of protests nationwide since video footage emerged showing Floyd, an unarmed black man in handcuffs, lying face down and struggling to breathe as a white police officer knelt on his neck.

Demonstrators rallied on Saturday in numerous urban centers – among them New York, Atlanta, Philadelphia, Chicago, Los Angeles, San Francisco, Boston and Miami – as well as in small, rural communities across the country.

“It feels like I get to be a part of history and a part of the group of people who are trying to change the world for everyone,” said Jamilah Muahyman, a Washington resident at a demonstration near the White House.

One of the more surprising Black Lives Matter rallies was a gathering of 150 to 200 people in the east Texas town of Vidor, notorious for its long associations with the Ku Klux Klan.

Floyd’s May 25 death has sparked a storm of protests and civil strife in the midst of the coronavirus pandemic, thrusting the highly charged debate over racial justice back to the forefront of the political agenda five months before the Nov. 3 U.S. presidential election.

With the notable exception of Seattle, where police used flash-bang grenades in a confrontation with demonstrators in the city’s Capitol Hill district, Saturday’s protests on the whole took on a relaxed tone compared with those of recent days.

The week began with sporadic episodes of arson, looting and vandalism in several cities that authorities and activists have blamed largely on outside instigators and criminal elements.

Police have at times resorted to heavy-handed tactics as they sought to enforce curfews in some cities, including New York and Washington, where baton-swinging officers in riot gear dispersed otherwise orderly crowds.

Those clashes have only galvanized the focus of the protests into a broader quest for reform of the criminal justice system and its treatment of ethnic minorities.

“I’m just hoping that we really get some change from what’s going on. People have been kneeling and protesting and begging for a long time, and enough is enough,” said Kartrina Fernandez, 42, a protester near the front of the White House.

The intensity of protests over the past week began to ebb on Wednesday after prosecutors in Minneapolis had arrested all four police officers implicated in Floyd’s death. Derek Chauvin, the white officer seen pinning Floyd’s neck to the ground for nearly nine minutes as Floyd repeatedly groaned “I can’t breathe” was charged with second-degree murder.

But Saturday marked the largest demonstration over Floyd’s killing to date.

Crowds numbering in the tens of thousands converged on the nation’s capital, despite health risks posed by the coronavirus, though official estimates of the turnout were unavailable.

The rallies in Washington, as elsewhere, were notable for drawing racially mixed crowds. 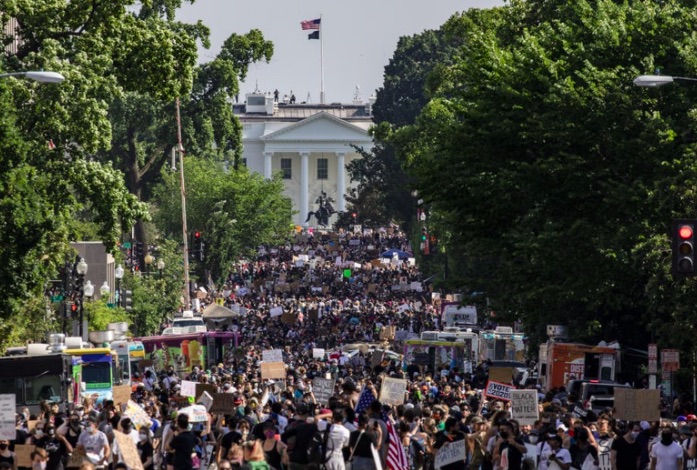 “Especially as a white person, I benefit from the status quo, and so not showing up and actively working to deconstruct institutional racism makes me complicit,” said Michael Drummond, 40, a government employee, explaining his reason for taking part.

Hundreds of miles to the south, in Floyd’s birthplace of Raeford, North Carolina, hundreds lined up at a church to pay their respects during a public viewing of Floyd’s body prior to a private memorial service for family members.

Floyd’s funeral is scheduled for Tuesday in Houston, where he lived before relocating to the Minneapolis area.

In New York, a large crowd of protesters crossed the Brooklyn Bridge into lower Manhattan on Saturday afternoon, marching up a largely deserted Broadway. Thousands of others gathered in Harlem near the northwest corner of Central Park to march downtown, about 100 blocks, to the city’s Washington Square Park.

In Philadelphia, demonstrators gathered on the steps of Philadelphia Art Museum steps chanting, “No justice, No peace.” Others marched along Benjamin Franklin Parkway, through John F. Kennedy Plaza, and around Philadelphia City Hall.

It was near the spot where U.S. Park Police and military personnel cleared Lafayette Square of peaceful demonstrators with chemical spray and smoke grenades on Monday night, paving the way for President Donald Trump to walk from the White House through the park to a church to hold a bible aloft for cameras.

On Saturday, Washington, D.C., Mayor Muriel Bowser, a vocal critic of Trump’s response to the protests this week, was spotted in the crowd while songs such as “Sweet Caroline” by Neil Diamond and “Alright” by Kendrick Lamar blared from loudspeakers.

The demonstrators included families and people of all ages carrying signs with slogans such as “Fed up,” “All lives do not matter until black lives do,” and “My black son matters.”

Police officers were present but in smaller numbers than earlier in the week. They generally assumed a less aggressive posture, wearing patrol uniforms rather than body armor and helmets.

In another sign of easing tension, Major General William Walker, commander of the D.C. National Guard, told CNN that the nearly 4,000 additional Guard troops deployed to the city from 11 states at the Pentagon’s request were likely to be withdrawn after the weekend.

“They will be redeploying this week, probably as early as Monday,” Walker said.