A petition from Code Pink

As people of faith and conscience, believing in the sanctity of all life on this planet, we call for a Christmas Truce in Ukraine. In the spirit of the truce that occurred in 1914 during the First World War, we urge our government to take a leadership role in bringing the war in Ukraine to an end through supporting calls for a ceasefire and negotiated settlement, before the conflict results in a nuclear war that could devastate the world’s ecosystems and annihilate all of God’s creation.

Initiated by Fellowship of Reconciliation-USA, CODEPINK, and the National Council of Elders. 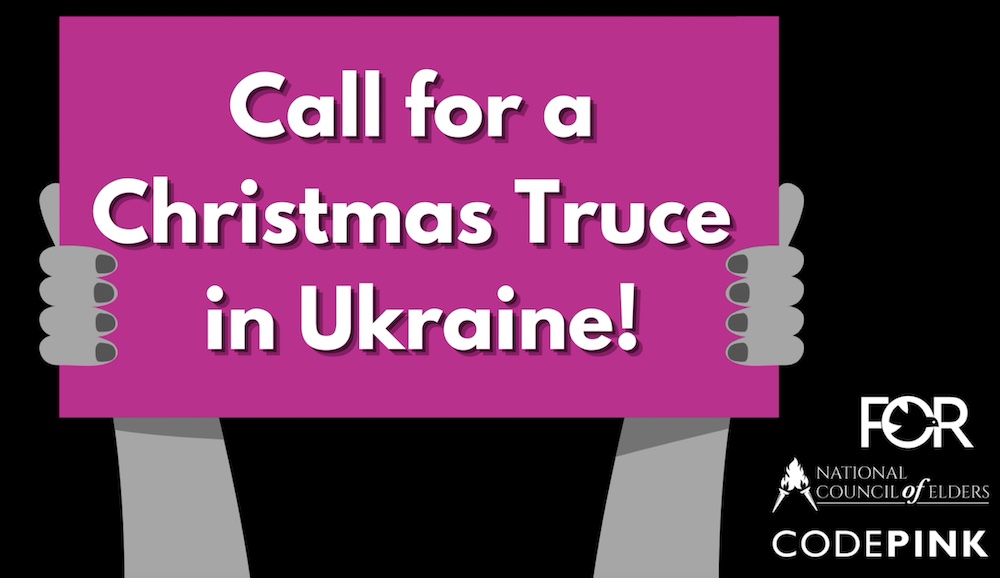 As the war in Ukraine rages on, the toll of death and destruction continues to mount and the potential for escalation and the use of nuclear weapons grows. The direct catastrophic impact the war has already had on the people of Ukraine is still unknown but countless thousands of civilians have already died and 14 million have been displaced. The war’s impact is multiplied outside of Ukraine’s borders as rising prices for wheat, fertilizer and fuel are creating growing crises in global hunger and poverty.

Whether it’s Christians around the world preparing for Christmas or Jews awaiting the Festival of Lights holiday of Hanukkah all of the Abrahamic faiths embrace the prophetic voice of Isaiah who exhorted us to transform swords into plowshares. In this winter holiday season of peace, we ask our government’s leaders to recall another murderous conflict between nations that took place on the European continent over a century ago. In 1914, roughly 100,000 German and British soldiers along the Western Front in World War I declared an unofficial Christmas Truce and ceased hostilities for a short period.

It was a moment so shocking to our usual expectations that it continues to reverberate in our collective imaginations over 100 years later. Another Christmas Truce could save lives and pave the way for critical peace talks.

The way out of the war in Ukraine will not be a military solution. The path toward peace in Ukraine requires powers of a different sort: negotiation and imagination.

As leaders of a diverse group of faith communities, we sign onto the petition below and pray that our leaders have the courage and conscience to use those powers instead.

If you are not a lay or ordained faith leader, please take this to your faith community/congregation and ask them to sign on.