An article from Wisconsin Bail Out the People Movement

During the past week (as of October 23, 2022), antiwar actions were held in more than 70 areas.  The actions took place mostly in the United States in answer to a call from the United National Antiwar Coalition (UNAC), but we were joined by a coalition of antiwar groups from Canada and also by some European countries.  We did not expect such an overwhelming response from our movement, but we learned people are ready to hit the streets and build a strong unified antiwar movement. 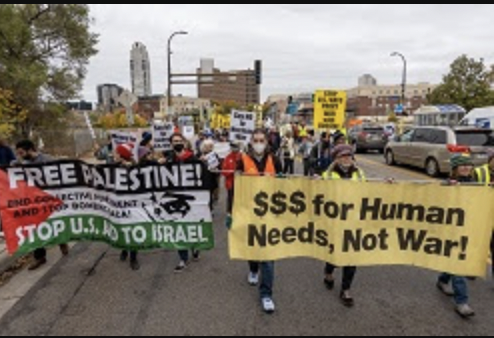 Understanding that the 2 main parties in the US are both imperialist and pro-war, the actions were called right before the US midterm elections.  Although the US and NATO are neck deep in their war with Russia in Ukraine and we may be closer to nuclear war than at any time in the past, there was no debate about war during this election period.  This despite that fact that the sanctions on Russia along with the US destruction of the Nord Stream pipelines has led to an economic crisis in the US and especially in Europe that is causing great hardship to the working people in North America and Europe.

The Ukraine war is also exposing deep cracks in the US empire that will change the world.  After the humiliating defeat of the US and NATO in Afghanistan, the looming defeat of the US and NATO in Ukraine along with the economic crisis is moving countries out of the orbit of the US as power is shifting to the East.  Few countries, especially in the Global South have gone along with the US sanctions on Russia.  We have also seen cracks in NATO and the European Union as the US uses the crisis to try and move Europe away from its trade relationships with Russian and China in order to bring more profit to US corporations at the expense of Europe.

If your group is not a member of UNAC, it is more important than ever that it joins.  In unity, there is strength.  To have your peace or social justice group join UNAC,  please go here.