An article by Anwarul K. Chowdhury in Indepthnews

23 years ago today, on 13 September 1999, the United Nations adopted the Declaration and Programme of Action on a Culture of Peace, a monumental document that transcends boundaries, cultures, societies, and nations. It was an honor for me to Chair the nine-month long negotiations that led to the adoption of this historic norm-setting document by the United Nations General Assembly.

(Editor’s note: The Declaration and Programme of Action was drafted by UNESCO on the request of the UN General assembly and submitted in 1998.) 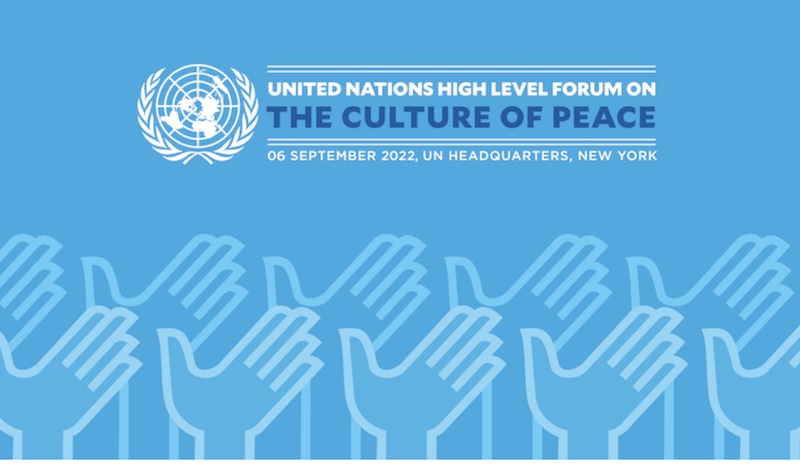 That document asserts that inherent in the culture of peace is a set of values, modes of behaviour and ways of life. I was highly privileged to introduce at the 53rd Session of UN General Assembly on its concluding day that resolution for adoption without a vote presenting the consensus text reached under my chairmanship.

20th anniversary of the culture of peace decision was the last in-person High Level Forum in 2019. After two years of virtual Forums, on 6 September this year, President of the 76th General Assembly Abdulla Shahid convened the in-person High Level Forum on The Culture of Peace. That was the eleventh in the series of annual Forums, the first day-long Forum being convened by the 66th President Ambassador Nassir Al-Nasser in 2012.

As his Senior Special Advisor, I had the full responsibility of organizing this pioneering initiative on 14 September. It was a huge success particularly amongst the UN’s civil society organizations which welcomed the opportunity they received to participate proactively along with the Member States and the rest of the UN system. Since then, the afternoon’s Panel Discussion has been considered as the civil society component of the Forum all these years.

Mandated by the UNGA resolutions, the Presidents of the General Assembly have been convening the annual high-level forums since 2012. The Forum provides a platform for the Member States, civil society, and relevant stakeholders to deliberate on the continuing applicability of the Culture of Peace in the contemporary contexts.

The Forum also has been the only UN gathering which was addressed by the largest number of women Nobel Peace laureates—six times out of eleven Forums. Also, the Forum’s panelists were always gender-balanced, on most occasions with more women, as was the case this year.

The Culture of Peace remains one of the key items for the General Assembly since 1997 when the Assembly decided to include a new and self-standing item to its agenda. This was followed by the UNGA resolution 52/15 of 20 November 1997 that proclaimed the year 2000 as the “International Year for the Culture of Peace” and GA resolution 53/25 of 10 November 1998, that proclaimed the period of 2001-2010 as the “International Decade for a Culture of Peace and Non-violence for the Children of the World”.

Over the years the scope of the Culture of Peace expanded allowing adoption by the General Assembly multiple resolutions on a wide range of issues relating to various areas of its Programme of Action.

This year’s Forum theme was “The Culture of Peace: Importance of justice, equality and inclusion for advancing peacebuilding”.

It provided an opportunity to Member States, UN system and the civil society to explore and discuss ways to promote justice, equality, and inclusion for advancing peacebuilding and sustaining peace, especially through inculcation and promotion of the values of the Culture of Peace, as the concept note stated.

The concept note also underscored that “… there is no alternative to investing in peacebuilding and sustaining peace, with a view to build a common vision of a society, ensuring that the needs of all segments of the population are taken into account. Such vision encompasses activities aimed at preventing the outbreak, escalation, continuation, and recurrence of conflict and addressing root causes. At the same time, there is an urgent need to eliminate discrimination and inequalities and promote social cohesion and inclusive development, to ensure no one is left behind. In this context, as elaborated in the UNGA resolution on the Culture of Peace, empowerment of people to address the challenges in a peaceful and non-violent way is an essential component.”

The United Nations was born in 1945 out of World War II. The UN Declaration and Programme of Action on a Culture of Peace was born in 1999 in the aftermath of the Cold War. Apart from the Charter, the Declaration and Program of Action is the only document which has focused so comprehensively on peace. Simply put, the Culture of Peace as a concept, as a motivation means that every one of us needs to consciously make peace and nonviolence a part of our daily existence. We should not isolate peace as something separate or distant.

Ever since the initiative taken by me in July 1997 to formally propose inclusion of a separate agenda item on the culture of peace in the UN General Assembly and its decision to do so, for the last two decades and half, my focus has been on advancing the culture of peace which aims at making peace and non-violence a part of our own self, our own values, our own personality. This has now become more pertinent amid the ever-increasing militarism, militarization and weaponization that is destroying both our planet and our people.

I believe there are two major developments that have the enormous opportunity to bolster the global movement for the culture of peace. Decision with regard to one has already been initiated while the other is still being brewed and hopefully will be ready by next week.

First the upcoming one—recognizing that education is a foundation for peace, tolerance, human rights and sustainable development, Secretary-General António Guterres has convened a Transforming Education Summit (TES) 16th to 19th September. Its three overarching principles are Country-led; Inclusive; Youth-inspired. All very relevant to creating the Culture of Peace. The Summit provides an opportunity to mobilize greater political ambition, commitment, and action to reverse the slide on the Sustainable Development Goal (SDG) 4 on education of the UN’s 2030 Agenda for Sustainable Development.

The Summit should highlight that the Point 4.7 of that Goal includes, among others, promotion of culture of peace and non-violence, women’s equality as well as global citizenship as part of the knowledge and skills needed to promote sustainable development. It also calls on the international community to ensure that all learners acquire those by the year 2030. I hope the outcome document of the Summit would reflect 4.7 of the SDG 4 with strong emphasis.

Never has it been more important for us to learn about the world and understand its diversity. The task of educating children and young people to find non-aggressive means to relate with one another is of primary importance.

Targeting the individual is meaningful because there cannot be true peace unless every one of us value peace and non-violence and practices the culture of peace in their actions. Connecting the role of individuals to broader global objectives, Dr Martin Luther King Junior affirmed that “An individual has not started living until he can rise above the narrow confines of his individualistic concerns to the broader concerns of all humanity.” The UN Programme of Action on the Culture of Peace pays special attention to the individual’s self-transformation.

All educational institutions need to offer opportunities that prepare the students not only to live fulfilling lives but also to be responsible and productive citizens of the world. For that, educators need to introduce holistic and empowering curricula that cultivate the culture of peace in each and every young mind.

Indeed, such educating for peace should be more appropriately called “education for global citizenship”. Such learning cannot be achieved without well-intentioned, sustained, and systematic peace education that leads the way to the culture of peace.

The other major development was announced in 2021. At last year’s Forum during the Panel Discussion, the peace activist and globally respected Mayor Kazumi Matsui of Hiroshima and President of Mayors for Peace in his virtual participation announced that “On the 7th of July this year, Mayors for Peace adopted its new Vision, titled: “Vision for Peaceful Transformation to a Sustainable World”. One of the objectives set forth by the new Vision is to ‘promote the culture of peace’, in addition to the ongoing objectives, “realize a world without nuclear weapons,” and “realize safe and resilient cities.”

He added that “Under this new Vision, Mayors for Peace will continue making our utmost efforts toward our ultimate goal of realizing lasting world peace in solidarity with its 8,043 member cities in 165 countries and regions.” This new vision would be placed at the center of the deliberations during 10th Annual General Conference of Mayors for Peace in Hiroshima this October.

In conclusion I would reiterate that women have a major role to play in promoting the culture of peace in our violence-ridden societies, thereby bringing in lasting peace and reconciliation. While women are often the first victims of any conflict, they must also and always be recognized as key to the resolution of the conflict. It is my strong belief that unless women are engaged in advancing the culture of peace at equal levels with men, sustainable peace would continue to elude us.

In various parts of the world, women have shown great capacity as peacebuilders.  They assumed activist roles while holding together their families and communities. At the grassroots and community levels, women have organized to resist militarization, to create space for dialogue and moderation and to weave together the shattered fabric of society. Through my field experiences, I am proud to recognize that involvement of women in the peace process in various conflict areas of the world has contributed immensely to ensuring longer term benefits for their present as well as future generations.

Often, I am asked how the UN is doing in the implementation of the Programme of Action adopted by the General Assembly in 1999. I believe that the Organization should own it fully and internalize its implementation throughout the UN system.  Also, Secretary-General should prioritize the culture of peace as a part of his leadership agenda. He should make good use of this workable tool that UN possess to advance the objective of sustainable peace. Not using the tool of the culture of peace is behaving like a person who needs a car to go to work and has a car… but with a minimal interest in knowing how to drive it.

I would repeat for the umpteenth time what former Secretary-General of the United Nations and Nobel Peace laureate Kofi Annan had said: “Over the years we have come to realize that it is not enough to send peacekeeping forces to separate warring parties. It is not enough to engage in peace-building efforts after societies have been ravaged by conflict. It is not enough to conduct preventive diplomacy. All of this is essential work, but we want enduring results. We need, in short, the culture of peace.”

I continue to emphasize that The Culture of Peace is not a quick fix. It is a movement, not a revolution!

One voice creates a ripple—many ripples make a wave—collectively, our voices for the culture of peace can transform the world.