As geopolitical tensions reach new highs, and some governments are spending billions on nuclear weapons in a false bid for peace and security, countries must uphold the nearly 80-year norm against their use, UN Secretary-General Antonio Guterres said in New York on Monday (August 1).

The UN chief was speaking at the opening of the Tenth Review Conference of the Parties to the Treaty on the Non-Proliferation of Nuclear Weapons, which runs through 26 August. 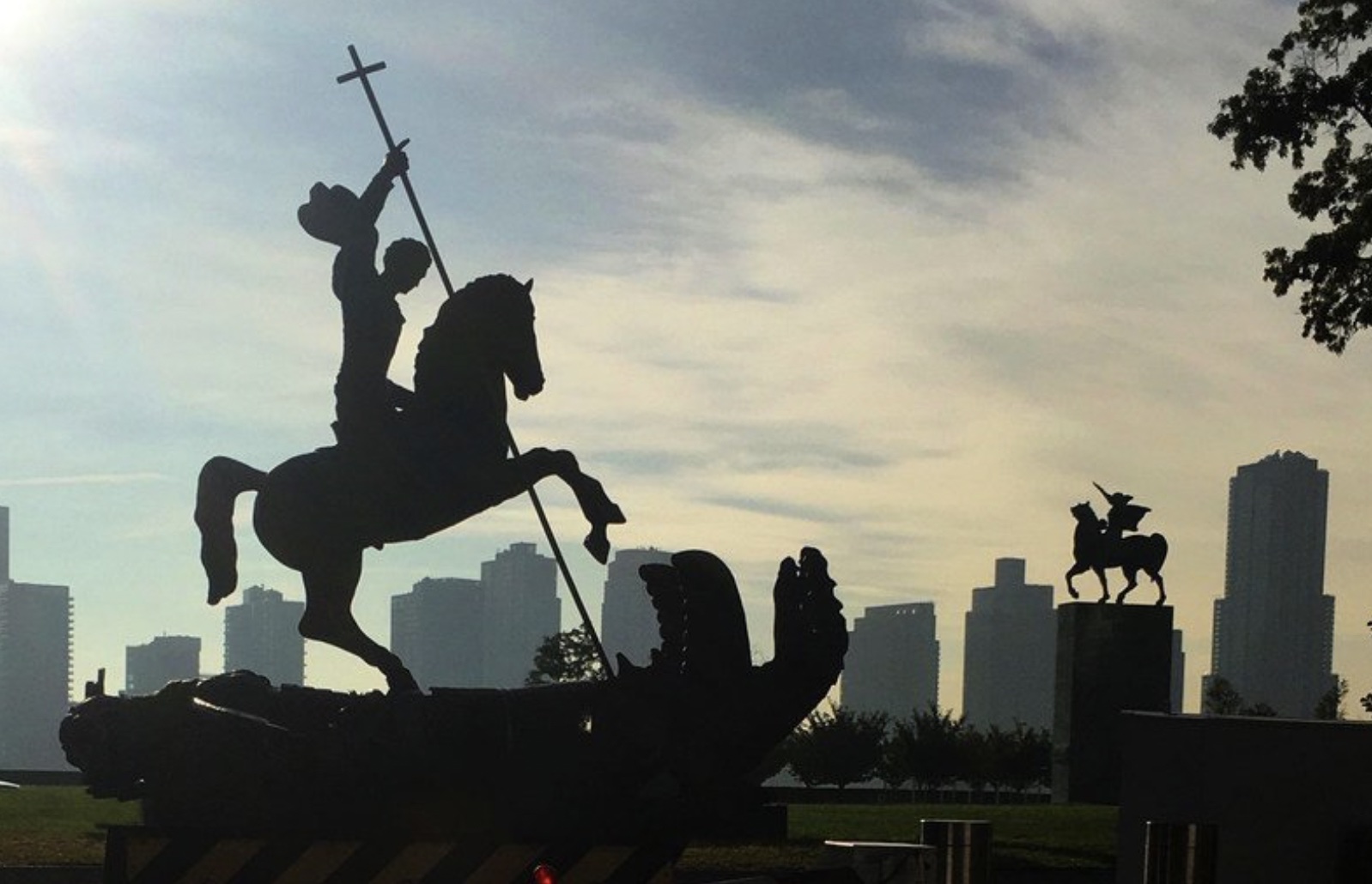 Sculpture at the United Nations created by Zurab Tsereteli. It depicts St. George slaying a dragon created from fragments of Soviet SS-20 missiles and United States Pershing nuclear missiles that were destroyed under the terms of the Intermediate-Range Nuclear Forces Treaty of 1987.

Mr. Guterres highlighted some of the current challenges to global peace and security, with the world under greater stress due to the climate crisis, stark inequalities, conflicts and human rights violations, as well as the devastation caused by the COVID-19 pandemic.

He said  the meeting is taking place amid these challenges, and at a time of nuclear danger not seen since the height of the Cold War.

“Geopolitical tensions are reaching new highs.  Competition is trumping co-operation and collaboration.  Distrust has replaced dialogue and disunity has replaced disarmament.   States are seeking false security in stockpiling and spending hundreds of billions of dollars on doomsday weapons that have no place on our planet,” he said.

Currently, almost 13,000 nuclear weapons are now being held in arsenals around the world, he added.

“All this at a time when the risks of proliferation are growing and guardrails to prevent escalation are weakening.   And when crises — with nuclear undertones — are festering, From the Middle East and the Korean Peninsula. To the invasion of Ukraine by Russia, and to many other factors around the world.”

He said today, humanity was “just one misunderstanding, one miscalculation away from nuclear annihilation.”

The Secretary-General underlined the importance of the non-proliferation treaty, saying it is needed “as much as ever”, while the review meeting provides an opportunity “to put humanity on a new path towards a world free of nuclear weapons.”

He outlined five areas for action, starting with reinforcing and reaffirming the norm against the use of nuclear weapons, which requires steadfast commitment from all parties to the treaty.

“We need to strengthen all avenues of dialogue and transparency. Peace cannot take hold in an absence of trust and mutual respect,” he said.

Countries also must “work relentlessly” towards the goal of eliminating nuclear weapons, which begins with new commitment to shrink their numbers.

This will also mean reinforcing multilateral agreements and frameworks on disarmament and non-proliferation, which includes the important work of the International Atomic Energy Agency (IAEA).

For his third point, Mr. Guterres focused on the need to address the “simmering tensions” in the Middle East and Asia.

“By adding the threat of nuclear weapons to enduring conflicts, these regions are edging towards catastrophe. We need to redouble our support for dialogue and negotiation to ease tensions and forge new bonds of trust in regions that have seen too little,” he said.

The Secretary-General also called for promoting the peaceful use of nuclear technology, such as for medical purposes, as a catalyst for advancing the Sustainable Development Goals (SDGs).

Finally, he urged governments to fulfill all outstanding commitments in the treaty, “and keep it fit-for-purpose in these trying times.”

The head of the IAEA, the UN’s nuclear watchdog, spoke of how the “spectre of war” has brought a new and unexpected dimension to nuclear safety in Ukraine.

Rafael Mariano Grossi said that at the beginning of the conflict, now nearly six months old, he outlined Seven Pillars of nuclear safety that should never be violated.  They include respecting the physical integrity of nuclear power plants, and ensuring staff can carry out their duties without undue pressure.

“All these seven principles have been trampled upon or violated since this tragic episode started,” he told the conference.

While the IAEA was able to work with Ukraine to restore the systems at the Chernobyl nuclear power plant, site of the 1986 disaster, Mr. Grossi continues to push for a mission to the Zaporizhzhya plant, the largest in the country, which is occupied by Russian forces.

Ladies and gentlemen, we are ready to go,” he said. “We hope to be able to come to Zaporizhzhya because if something happens there, we will only have ourselves to blame for it. Not a catastrophe, not an earthquake, or tsunami.  It will be our own inaction to blame for it.”

“We know that for us to be able to give the necessary and credible assurances that every activity in the Islamic Republic of Iran is in peaceful uses, we need to work collaborative(ly) with them,” he said.

“It can be done, we have been doing it in the past, but we need – and I say this very clearly – we need to have the access that is commensurate with the breadth and depth of that nuclear programme.”

The situation in the Democratic Republic of Korea (DPRK) also remains a concern, and he expressed hope that IAEA inspectors will be able to return to the country.

(Thank you to Sarah Guerard for sending this article to CPNN.)