Excerpts from an article by Matt Kennard*, 14 July, in Declassified UK

The President of Bolivia from 2006-19 invites Declassified to his house deep in the Amazon rainforest for an exclusive interview – on the UK role in the coup that overthrew him, how he reversed 500 years of history and industrialised Bolivia, and the efforts of the US and its British ally to bring him down. 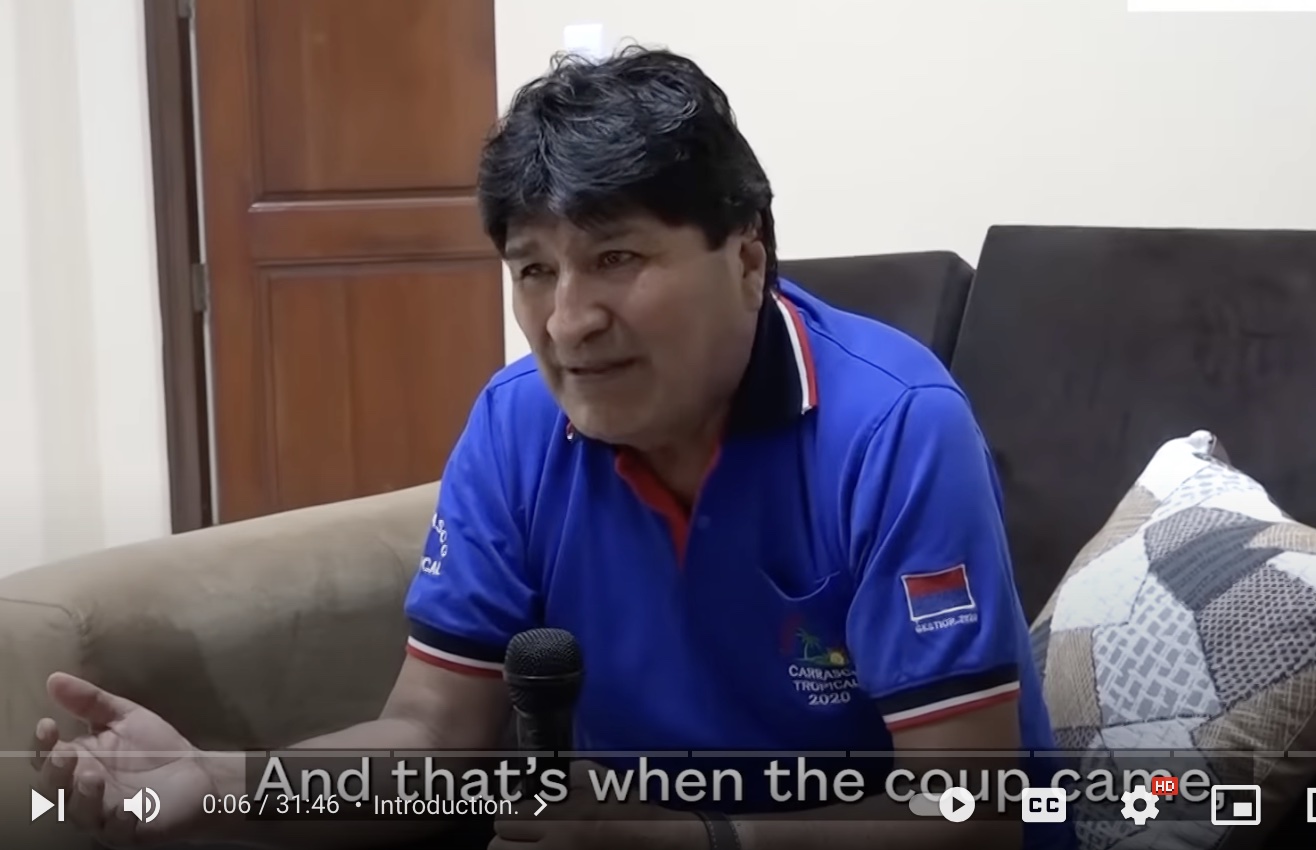 When Evo Morales, Bolivia’s first indigenous president, was overthrown in a British-backed  coup in November 2019, many believed his life was in danger. Latin America’s history is littered with liberation leaders cut down by vengeful imperial powers.

Legendary resistance leader Túpac Katari, like Morales from the Aymara indigenous group, had his limbs tied  to four horses by the Spanish before they bolted and he was ripped apart in 1781.

Some 238 years later, Bolivia’s self-declared ‘interim president’ Jeanine Áñez appeared in Congress days after the coup against Morales brandishing a huge leatherbound Bible. “The Bible has returned to the government palace,” she announced.

Her new regime immediately forced through Decree 4078  which gave immunity to the military for any actions taken in “the defence of society and maintenance of public order”. It was a green-light. The following day, 10 unarmed protestors were massacred by security forces.

When the coup was looking inevitable, Morales had gone underground.

His destination, with his vice-president Álvaro García Linera, was El Trópico de Cochabamba, a tropical area deep in the Amazon rainforest in central Bolivia, and the heartland of his Movimiento al Socialismo (MAS) party and its indigenous base. . . .

Days after Morales and Linera arrived in El Trópico, Mexico’s left-wing president Andrés Manuel López Obrador sent a plane to rescue them, flying them out of Chimoré airport again.

Obrador later said that the Bolivian armed forces targeted the aircraft with an RPG rocket moments after it took off. It appears the UK-backed coup regime wanted the deposed president – who had served for 13 years – dead. Morales credits Obrador with saving his life.

Morales is back in El Trópico now, but in very different circumstances.

After a year of ‘interim government’ democracy was eventually restored in October 2020 and Morales’s MAS won the elections again. The new president Luis Arce, formerly Morales’ economy minister, took power and Morales made a triumphant return from exile in Argentina.

After a tour of much of the country on foot, Morales settled back in El Trópico.

He has recently moved into a house in Villa Tunari, a small town that sits just 20 miles down the road from Chimoré airport. It has a population of just over 3,000. . . .

I got the interview because of an investigation I wrote in March 2021 revealing the UK’s support for the coup which deposed Morales. . . .

Local journalists told me that Morales often mentions the article in his speeches, so I start with that.

“Just last year, through the media, we were informed that England had also participated in the coup,” he tells me. This, he continues, was a “blow against our economic model, because our economic model has produced results.”

Morales continues: “When we came to government in 2006, Bolivia was the last country in South America in terms of economic and development indicators, the penultimate country in all of America.”

Over the next 13 years of his government Bolivia experienced its most stable period since it declared independence in 1825, and achieved unprecedented economic success, even praised by the IMF and World Bank. Crucially, this success was translated into unprecedented improvements  for Bolivia’s poor.

“For the first six years we had the highest levels of economic growth in all of South America and that was because of those policies that came from social movements based on nationalisation,” Morales tells me.

He was part of the “pink tide ” of left-wing governments in Latin America in the 2000s, but his model was more economically radical than most.

On his hundredth day in office, Morales moved to nationalise  Bolivia’s oil and gas reserves, ordering the military to occupy the country’s gas fields and giving foreign investors a six-month deadline to comply with demands or leave.

Morales believes it was this programme of nationalisation that led to the Western-backed coup against him.

“I continue to be convinced that the empire, capitalism, imperialism, do not accept that there is an economic model that is better than neoliberalism,” he tells me. “The coup was against our economic model…we showed that another Bolivia is possible.”

Morales says the second phase of the revolution – after nationalisation – was industrialisation. “The most important part was lithium,” he adds.

Bolivia has the world’s second-largest  reserves of lithium, a metal that is used to make batteries and which has become increasingly coveted due to the burgeoning electric car industry.

Morales remembers a formative trip to South Korea he made in 2010.

“We were discussing bilateral agreements, investments, co-operation and they took me to visit a factory that produced lithium batteries,” Morales says. “Interestingly, South Korea was asking us for lithium, as a raw material.”

Morales said he asked at the factory how much it cost to build the facility. They told him $300m.

“Our international reserves were growing,” he adds. “I said at that moment, ‘I can guarantee $300m dollars’. I said to the Koreans, ‘let’s replicate this factory in Bolivia. I can guarantee your investment’”. The Koreans said no.

“That’s when I realised that industrialised countries only want us Latin Americans so that we can guarantee them their raw materials. They don’t want us to give us the added value.”

At that point, Morales resolved to start industrialising Bolivia, reversing half a millennium of colonial history.

The traditional imperial dynamic which had kept Bolivia poor was that rich countries would extract raw materials, send them to Europe to be made into products, industrialising Europe at the same time, and then sell them back to Bolivia as finished products, at a mark-up.

With the country’s lithium deposits, Morales was adamant this system was finished. Bolivia would not just extract the lithium. It would build the batteries, too. Morales calls it “value added”.

“We started with a laboratory, obviously with international experts that we hired,” he says. “Then we moved on to a pilot plant. We invested around $20 million, and now it’s working. Every year it produces about 200 tonnes of lithium carbonate, and lithium batteries, in Potosí.”

Potosí is a city in southern Bolivia that became the centre of the Spanish empire in Latin America after gargantuan silver deposits were discovered there in the 16th century. Called  “the first city of capitalism”, it is estimated up to eight million  indigenous people died mining Potosi’s Cerro Rico (Rich Hill) for silver, all of it destined for Europe.

Morales continues: “We had a plan to install 42 new [lithium] plants by 2029. It was estimated that profits would be five billion dollars. Profits!”

“That’s when the coup came,” he says. “The US says China’s presence is not permitted but…having a market in China is very important. Also in Germany. The next step was with Russia, and then came the coup.”

He continues: “Just last year, we found out that England had also participated in the coup – all for lithium.”

But Morales says his people’s long struggle for control over their own riches is not unique.

Morales’ nationalisation programme put him on a collision course with powerful transnational companies who were used to the traditional imperial dynamic.

“During the 2005 campaign, we said, if corporations want to be here they do so as partners, or to provide their services, but not as bosses or owners of our natural resources,” Morales says.  “We established a political position with regards to transnational companies: we talk, we negotiate, but we do not submit to transnational corporations.”

Morales continues: “The most important thing now is that of 100% revenue, 82% is for Bolivians and 18% for corporations. Before it was 82% for the companies, 18% for the Bolivians, and the state had no control over production – how much they produced, how they produced – nothing”. . .

Since the formation of the Monroe Doctrine in 1823 – which claimed the Western Hemisphere as the US’s sphere of influence – Bolivia has been largely under its control. This changed for the first time with the advent of the Morales government.

“As a state, we want to have diplomatic relationships with all the world, but based on mutual respect,” Morales tells me. “The problem we have with the US is that any relationship with them is always subject to conditions.”

Morales continues: “It’s important to have commerce and relations based on mutual benefit, not competition. And we found some European countries that do that. But above all we found China. Diplomatic relationships with them aren’t based on conditions.”

He adds: “With the US, for example, their economic plan, the Millennium Challenge Corporation, if you wanted to access it you had to, in exchange, privatise your natural resources.”

The MCC was a project  of the George W. Bush administration which sought to run aid more like a business. Headed by a CEO, it is funded by public money but acts autonomously, and has a corporation-style board which includes  business people expert in making money. The aid “compacts” it signs with countries come with attached policy “conditionalities”.

“China doesn’t place any conditions on us, same as Russia, and like some countries in Europe,” Morales adds. “So that is the difference” . . . .

Morales believes that information and communication for the “people who do not have a voice” is the most important issue today. He is currently working on building independent media in Bolivia.

“The people without many means of communication are faced with a hard struggle to communicate,” Morales says. “We have some experience, for example in El Trópico. We have a radio station, we don’t have a national audience, but it is listened to and followed a lot by the right-wing media.” They follow mainly to find attack lines on Morales.

“How nice it would be if the people had their own media channels,” Morales continues. “This is the challenge the people have. This media we have, which belongs to the empire or the right-wing in Bolivia, that’s how it is in all Latin America. It defends its interests…and they are never with the people.”

He adds: “When, for example, the right-wing makes a mistake it is never revealed, it’s covered-up and they protect themselves. The [corporate] media is there to defend their big industries, their lands, their banks, and they want to humiliate the Bolivian peoples, the humble people of the world.”

Latin America has long been the world’s home of democratic socialism. I ask Morales if he has hope for the future. “In South America, we are not in times of Hugo Chávez, Lula, [Néstor] Kirchner, [Rafael] Correa,” he says.

Together these progressive leaders pushed for the integration of Latin America and the Caribbean, through organisations such as the Union of South American Nations (UNASUR) in 2008 and the Community of Latin American and Caribbean States (CELAC) in 2011.

“We came down, but now we are recovering,” Morales adds.

Recent events point to another left-wing resurgence in the continent. Morales points to recent victories in Peru, Chile and Colombia and Lula’s expected return to the presidency in Brazil soon.

“Those times are returning,” he says. “We need to again consolidate these democratic revolutions for the good of humanity. I have a lot of hope.”

* Matt Kennard is chief investigator at Declassified UK. He was a fellow and then director at the Centre for Investigative Journalism in London. Follow him on Twitter @kennardmatt

(Thank you to Joe Yannielli for sending this article to CPNN.)