An article from The Progressive Magazine

We are veterans of a long struggle for social justice in our nation and peace in the world. We are the National Council of Elders (NCOE) and stand alongside legions of elders who work to resist oppression and build dreams of new worlds. Our commitment is to accompany younger twenty-first-century leaders in their effort to bring a greater measure of justice, equality, and peace to our country and world. Individual members of the NCOE who are signing this statement are listed at its end. For more information about the NCOE, see www.nationalcouncilofelders.org. 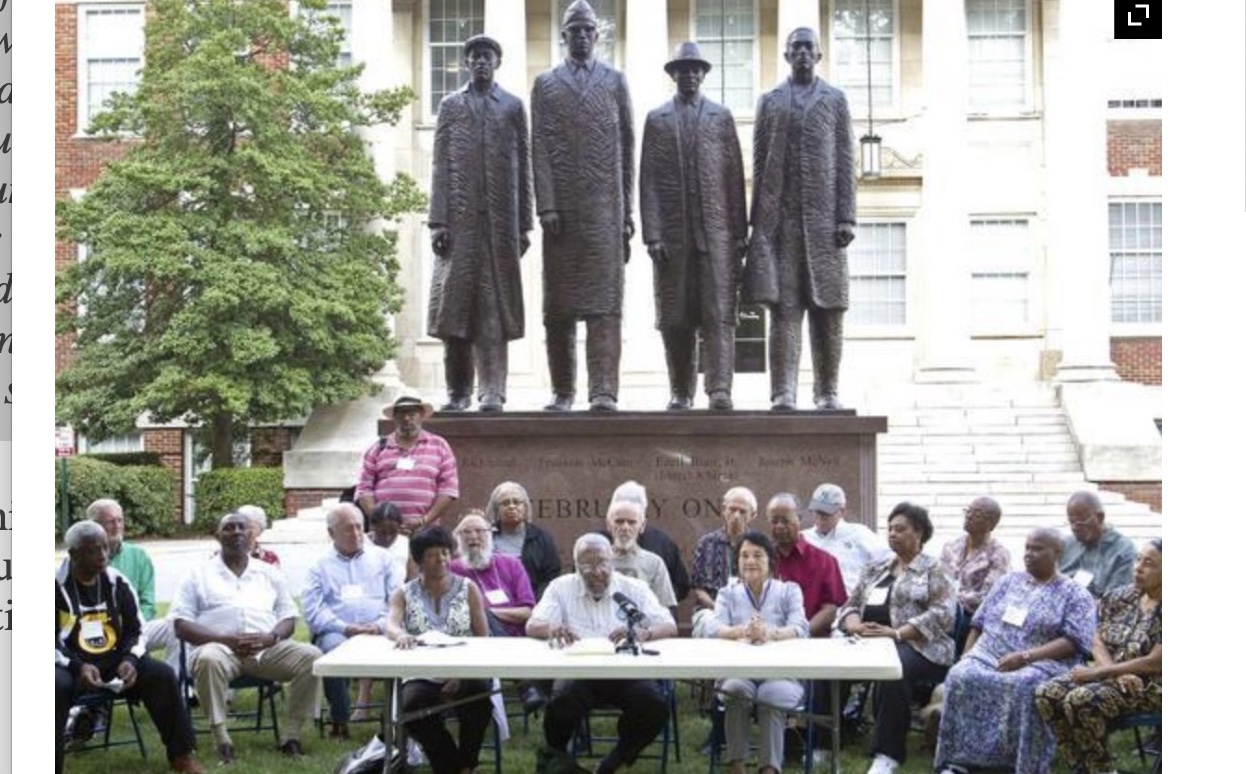 February One is the name of the 2002 monument dedicated to Ezell Blair Jr., Franklin McCain, Joseph McNeil and David Richmond who were collectively known as the Greensboro Four. On February 1, 1960 they staged a sit-in at the Woolworth Department store in Greensboro, NC. All were students at North Carolina Agricultural and Technical State University in their freshman year. Shortly afterwards sit-ins began across the South. James Barnhill, sculptor

We are offering this out of our deep concern for the future. We are appalled at the brutality of Russia’s war against Ukraine, the killing and uprooting of thousands, and the destruction of their homeland.

Yet we have questions about our own country’s role in the lead-up to the war and the decision to supply Ukraine with weapons and intelligence information while failing to work for de-escalation of the conflict and for peace between Russia and Ukraine. Though Ukrainians are valiant, we must support them by insisting that there be negotiations toward peace before their country is utterly destroyed. We recognize the longing for peace within Russia, as many Russians risk their lives to denounce the invasion of Ukraine.

Our government has proven to be able to turn global crises into opportunities to extend its domination of other people and to gain control of resources. It must be stopped from waging a proxy war against Russia to maintain world domination, initiating the Cold War all over again. In committing billions of dollars to Ukraine for weaponry, our Congress seems oblivious to the danger that escalation might lead to nuclear war, putting all life at risk. It has refused to provide the same pressures toward a peaceful, negotiated resolution of the conflict.

The U.S. capitalist system rests upon a power that is secured by violence and the threat of violence. Hence violence pervades all aspects of our lives here in the United States, corroding our most essential connections to each other. Our government is ready to spend trillions on war, but will not legislate to provide money to feed the hungry, house the homeless, or provide a good education for our children or health care for all.

A deepening sense of grief has settled over many as we witness the outrage of war in Ukraine and the egregious gun violence here at home, in the neighborhoods of Buffalo, New York, and Uvalde, Texas, and elsewhere. Any violent death by noose, knee, gun, drone, missile, howitzer, or bomb is a dramatic symptom, not the disease.

The mounting bloodshed at home and abroad engulfs us all. Domestic gun violence has broken our hearts and greatly wounded our lives. It has destabilized our society by inducing wide-scale fear, distrust, and loss of faith in the laws of civility.

Most egregiously, gun violence has killed or injured more than 34,500 children, 6,500 of whom are under the age of 12. Guns are the number one cause of death for teenagers, some of whom have been targeted by a “toy” industry that inures them to violence and the preciousness of life.

The profits from the arms industry, from handguns to missiles, are skyrocketing. Many members of Congress and gun manufacturers are so heavily invested in the sale of guns, and the culture of violence and war that they try to deflect attention from the horrors we are witnessing—and which we are responsible to stop—by insisting that mental health problems and the failure of school safety measures are to blame for the loss of so many innocent lives.

We know the profound hypocrisy of their message. We must not allow legislators whose objective is U.S. global dominance and who have been corrupted by bribes from the gun lobbyists to sacrifice the lives of our children and the people’s peace to their own arrogance, greed, and inhumanity.

At the international level, we call for:
● Intensification of demands for peace negotiations between Russia and Ukraine.
● A pledge that the United States will never again use nuclear weapons.
● Re-engagement in nuclear arms reduction by all nations.

At home, we call for:
● A ban on the sale of weapons of war.
● Demilitarization of local police forces and an end to racist police violence,
● Increased funding of programs that ensure essential social and economic resources to communities, and cultivate the critical and creative capacities of our children.

Our society is drowning in more than 400 million guns. By all means at our disposal, and with all measures that will restore our spirituality and our respect for our neighbors, we will work toward a culture of peace. We call on everyone to become actively involved in the local and national efforts that are focused on keeping our communities free of weapons of war. Foremost, we must commit ourselves to protecting the children and helping them see the possibilities of a world where life is valued, protected, and cherished.