An article by Yucatan State Government (translation by CPNN)

In order to reinforce joint actions in matters of security and social peace in Yucatan, the head of the General Secretariat of the Government (SGG), María Fritz Sierra, presided over the signing of two agreements between 10 municipalities and the Center for the Prevention of Crime and Citizen Participation (Cepredey). 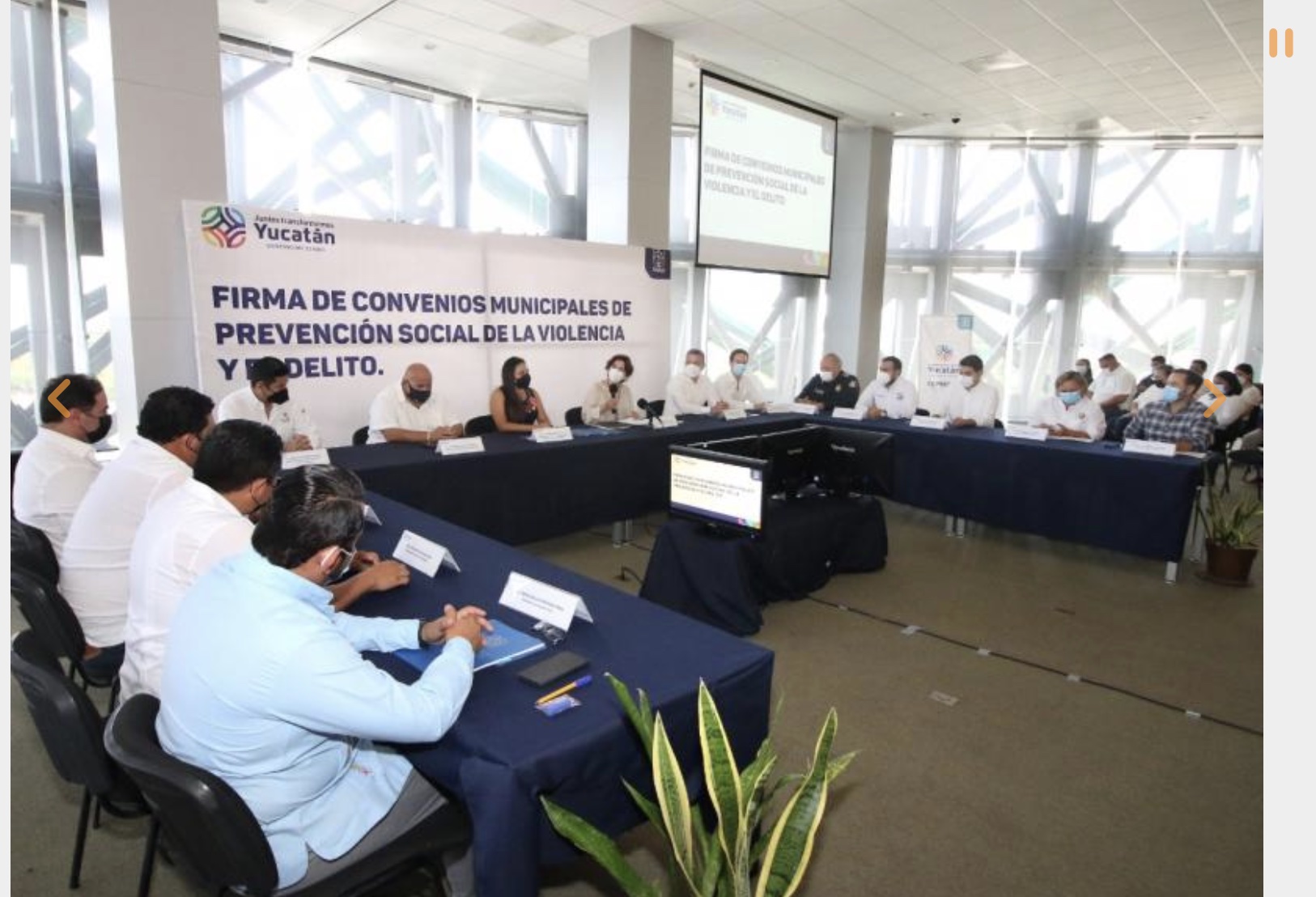 This coordination between state and municipal authorities responds to the instruction of Governor Mauricio Vila Dosal, to add and multiply efforts to promote effective strategies, focused and concentrated to strengthen prevention, to reduce and to eradicate the factors that generate violence or illicit conduct.

Along with the Great Museum of the Mayan World, the mayors of Mérida, Umán, Progreso, Hunucmá, Kanasín, Motul, Tekax, Ticul, Tizimín and Valladolid promised to coordinate efforts to strengthen the culture of peace in this first stage, with other actions to follow.

The head of the SGG highlighted the willingness and interest of the councilors to strengthen collaboration with the Executive, with the idea that prevention is the best way to combat violence and crime, and that these issues are part of the priority agenda of public management in the territory.

Likewise, she stressed that these agreements are an example of a responsible public administration, which seeks to implement policies of real benefit to citizens including complementary efforts to achieve specific and measurable goals.

“Our commitment is to carry out coordinated work, regardless of political associations, since, without you and your participation, our best intentions and strategies could not materialize,” she said in her message to the municipal presidents.

Together with the Undersecretary for Prevention and Social Reintegration, Fernando Rosel Flores, and the Director of the Institute for Regional and Municipal Development (Inderm), David Valdez Jiménez, Secretary Fritz Sierra recalled that Yucatán is recognized for its levels of peace, up to the level of cities in the “first world.”

However, she pointed out, crimes occur as well in the most developed countries; in the same way in our state and some municipalities, especially those with the highest population density.

“The coordination of efforts between the various local government agencies and municipal administrations is essential to address the magnitude of the problem that violence represents in our society,” she said.

Along with the director of the Mérida Municipal Police, Mario Arturo Romero Escalante, the head of the SGG called for the development of a work agenda to complement action strategies, giving priority to the particular situations of each community.

The document that was signed establishes, among other requirements, to implement training for social prevention of violence and crime for the personnel of the City Councils, in order to strengthen their institutional capacities.

Also, the official instructed the Cepredey staff and its director, Joana Briceño Ascencio, to put all their efforts so that the agreement can yield the expected results. The project is based on scientific social evidence, and it applies an intercultural and community approach.

The approach includes diagnoses, job training and economic support; peace networks with youth, children and women; reeducation and special attention to families with a history of violence, as well as leisure, sports, recreational and educational activities including courses, workshops and talks.

“Today, we take a step in favor of Yucatan; beyond positions, creeds or political interests, I am pleased with your commitment and solidarity, which all Yucatecans share, in favor of the peace and security that we desire,” Fritz said. Likewise, she urged the mayors to maintain the spirit of dialogue and cooperation in order to continue building a better future.

For his part, the secretary of the Municipality of Mérida, Alejandro Ruz Castro, expressed the approval of the Renán Barrera Concha administration with this agreement, since it allows optimization of prevention and the continuation of working together with the State, to strengthen security and provision of justice, that are “props for the development of a society”.

The mayor of Umán, Gaspar Ventura Cisneros Polanco, affirmed that this type of agreement allows us to continue supporting the transformation process promoted by Governor Mauricio, so that our territory continues to be the safest in the country.

What we need, he added, are not only public policies to avoid more risk factors that generate violence in our municipality, but also strategies that lead to the active participation of society, for which he applauded this teamwork, the only way to move towards the needed transformation.

Afterwards, Briceño Ascencio made available the experience and capacity of Cepredey, to accompany and guide the 10 participating municipalities, by strengthening their institutional capacities and achieving effective prevention. For this he requested those present for their commitment, support and, above all, , leadership.

“As the General Secretary of the Government, María Fritz, points out, time is running out for us and this is our moment to lay the foundations for all the best we can do, for our state and its municipalities,” she said.

Finally, she reiterated that “we have an allied State Government committed to the actions that required to achieve our mission, which is to continue making Yucatan the best state to live in.”