Dmitry Muratov, the editor in chief of one of Russia’s leading independent newspapers, Novaya gazeta, said he was attacked by an assailant who threw a mixture of red paint and acetone on him.

(Editor’s note: So far Muratov has avoided assassination, but when he received the Nobel Peace Prize last year, he said the prize was for his colleagues at Novaya Gazeta who had been assassinated: “for Yuri Shchekochikhin, it’s for Anna Stepanovna Politkovskaya, it’s for Nastya Baburova, it’s for Natalia Estemirova, for Stas Markelov,” he told Russian media. “It is that of those who died defending the right of people to freedom of speech.”) 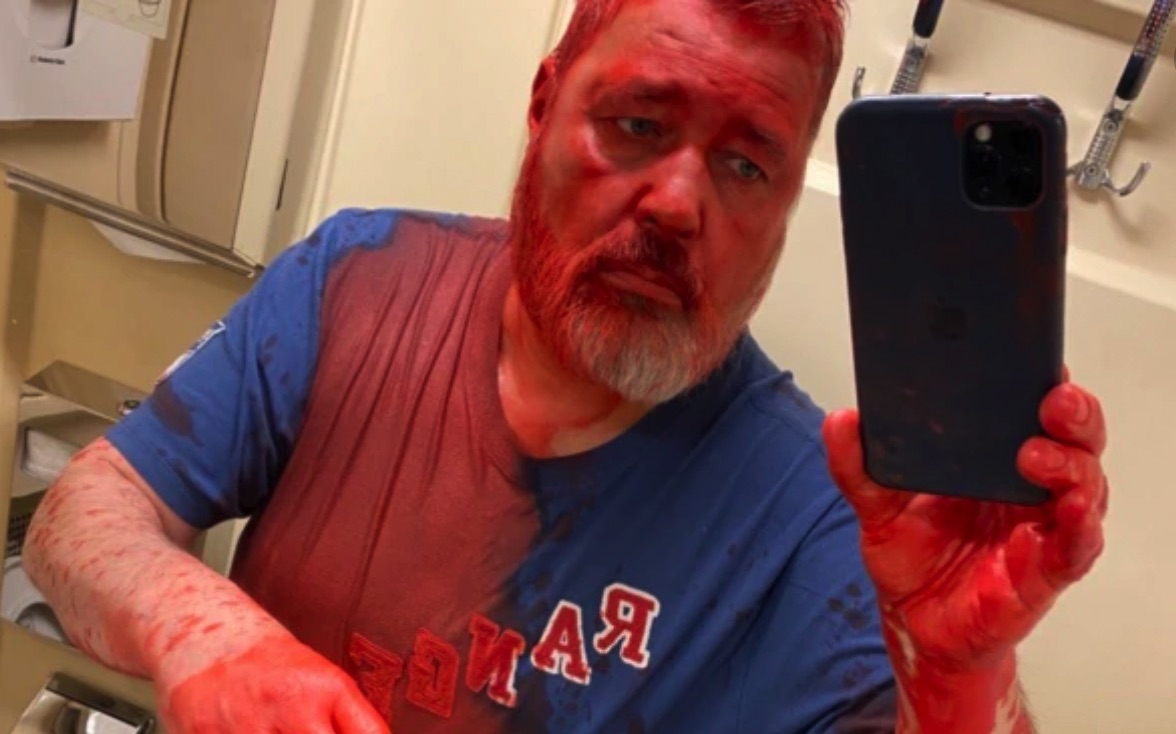 A photo of Muratov posted by the newspaper on Telegram showed his head, shirt, hands, and arms covered in red paint.

Muratov, co-winner of the 2021 Nobel Peace Prize with Filipino journalist Maria Ressa, was on a train bound from Moscow to Samara on April 7  when the attack occurred.

A photo of Muratov posted by the newspaper on Telegram showed his head, shirt, hands, and arms covered in red paint.

Muratov said the attacker shouted, “Muratov, here’s to you for our boys.”

He told the new European edition of Novaya gazeta about the attack, saying that his eyes were burning badly

The newspaper said it had been warned twice by Roskomnadzor, meaning the state communications regulator was open to pursue closing the independent outlet down through legal action.

Earlier on April 7, journalists from Novaya gazeta who fled Russia amid the ongoing crackdown on independent reporting said they have launched  a new media outlet that aims to cover news and developments in Russia and around the world in Russian and several other languages.

Kirill Martynov, the former editor of Novaya gazeta’s unit on political issues, will be the editor in chief of Novaya gazeta Europe, the publication said in a statement on its website.

“We know that we have readers around the world who are waiting for verified information,” the statement said.

“That is why we, Novaya gazeta journalists who were forced to leave their country because of a de facto occupational ban being in put into effect, are pleased to announce that we have launched Novaya gazeta Europe — an outlet that shares our values and standards.”

The statement did not say where the newspaper would be based.

Russia has placed strict limits on how media can describe the war Moscow launched in Ukraine. According to the regulator, media must follow official government communications only for what Moscow calls a “special military operation.” Usage of the words “war” or “invasion” with regard to the fighting in Ukraine is banned.

In early March, President Vladimir Putin signed into a law legislation that punishes those who distribute what is deemed “false information about the Russian Army” in their reports about Ukraine, with a prison sentence of as much as 15 years.

Several other Russian media outlets have already opted for suspending operations rather than face heavy restrictions on what they can report, and the Kremlin has also blocked multiple foreign news outlets, including RFE/RL.