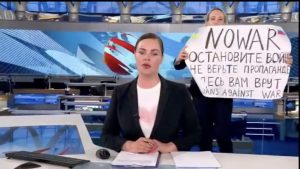 There is a very extensive movement to stop the war in the Ukraine, but as of two months into the war, in April, 2022, it is not clear if the war can be stopped.

Will it be different this time?

If it is possible to reach an armistice in the war, the peace movements will have played an important role.

Unfortunately, it seems that the goal of the American empire is not to achieve an armistice, but to continue to arm Ukraine with the goal of a complete military defeat of Russia.

Perhaps the war will drag on for many years until Ukraine is reduced to a state of devastation similar to that of Vietnam, Iraq, Syria and Afghanistan, victims of other recent wars.

Or perhaps it will escalate into World War III . . .

Below are articles in CPNN about this question:

Make peace, not war The Kremlin’s internal polling shows that more than half of Russians now favor negotiations with Ukraine

USA: Statement from Faith Organizations and Leaders Calling for a Christmas Truce in Ukraine

Say NO to U.S. wars! Actions took place in more than 70 areas across the US and Canada

Marching for peace in Ukraine: thousands in Rome ask for the peaceful resolution of the war

Peace Agenda for Ukraine and the World

Russia: Pop Diva Alla Pugacheva Comes Out Against the War

The Second Level Geopolitical War in Ukraine Takes Over

A Nordic Initiative for Peace in Ukraine and Lasting World Peace

More examples available of Russian opposition to the war against Ukraine

China: Academic dissent emerges on war in Ukraine but is censored

Russians are against the war on Ukraine

How the U.S. Started a Cold War with Russia and Left Ukraine to Fight It

Thousands of IT workers in Russia sign public anti-war petition

Russian teachers against the war

Lukoil, Russia’s largest private company, comes out against the war

Open letter of Russian mathematicians against the war in Ukraine

USA: A Labor Statement on the Crisis in Ukraine

German petition against war in the Ukraine

USA: United National AntiWar Coalition : US and NATO aggression towards Russia – danger at the Ukrainian Border

UK: Stop the War statement on the crisis over Ukraine

France : War is never the solution. Yes to a negotiated political solution.