An opinion piece by Javier Buenrostro from RT (translation by CPNN)

Last Monday (January 3), in his first morning conference, Mexican President Andrés Manuel López Obrador appeared flanked by Jeremy Corbyn, a British MP and leader of the Labor Party between 2015 and 2020. Corbyn, who is one of the main references of the European left, has strong ties with Mexico since his wife, lawyer Laura Álvarez, is Mexican and for this reason maintains an important bond that extends to all of Latin America. For example, Corbyn does not stop pointing out that Gabriel Boric’s triumph in Chile a few days ago gives him joy and hope.A petition from United National Antiwar Coalition 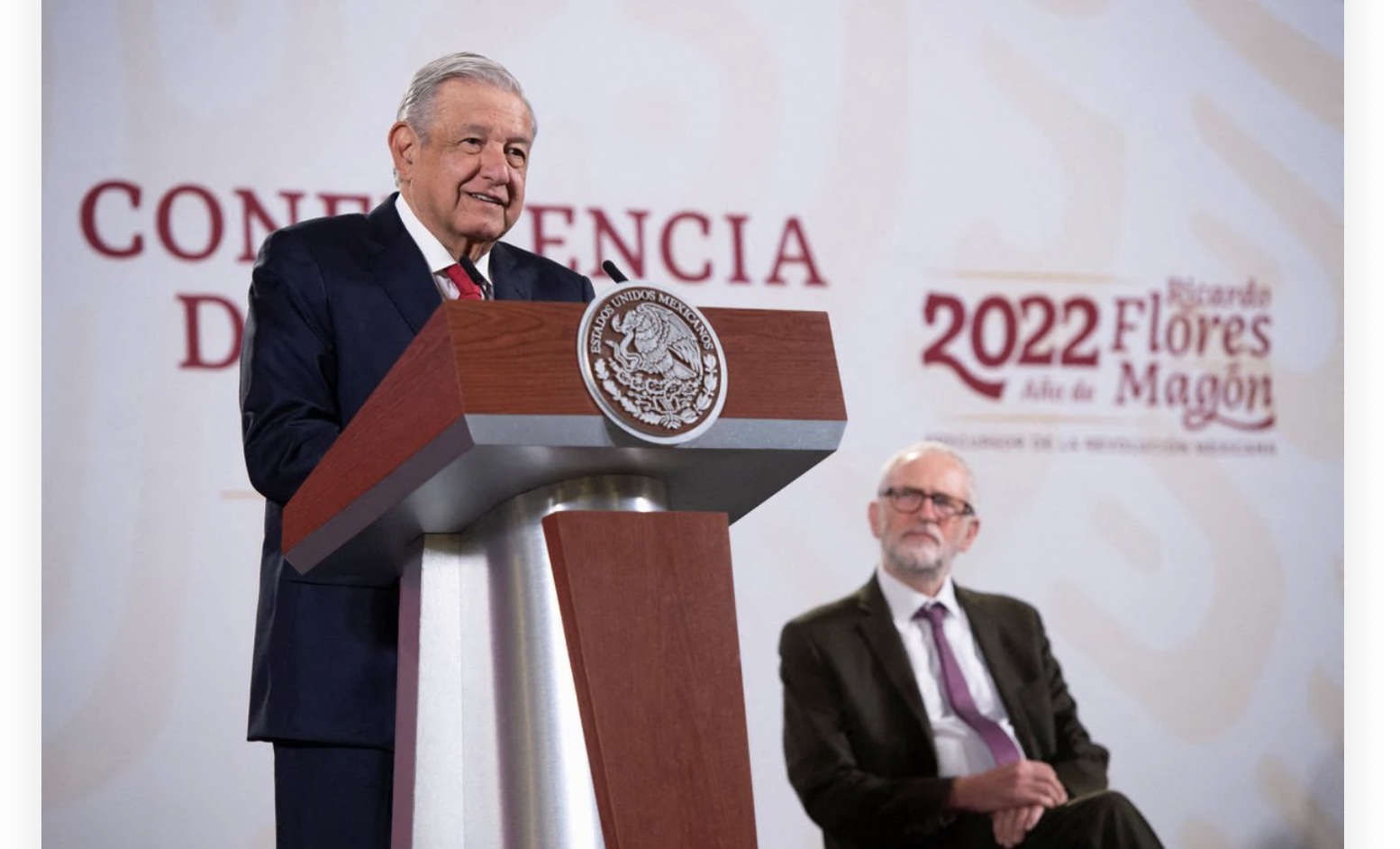 Due to Corbyn’s presence, the Mexican press asked López Obrador about his offer of asylum to the Australian journalist Julian Assange , WikiLeaks founder and who is about to have served three years in a London jail and ten years deprived of his freedom, counting the time he was asylum in the Embassy of Ecuador in the United Kingdom.

The United States government is close to prosecuting Julian Assange on charges of espionage and attacking national security, after British judges accepted that the WikiLeaks leader could be extradited to that country. Given this , the possibility of asylum for Assange in a country has once again been considered , as a measure to protect human rights and freedom of the press and information.

Mexico, honoring one of its best traditions in foreign policy, which is that of giving refuge to those persecuted for political or ideological reasons, has on several occasions expressed its intention to provide asylum to Julian Assange, even in the face of the possible controversy and confrontation that could arise. ith the United States.

Click here for the Spanish original of this article.

López Obrador revealed that on December 23, 2020, he wrote a letter to Donald Trump asking the United States government to exonerate and pardon Julian Assange. In the letter, the Mexican president explained to his counterpart that, in his opinion, Assange was a person moved by ideals and principles, and that for that fact he should be worthy of compassion. Unfortunately, the letter was never answered.

Currently, according to Foreign Minister Marcelo Ebrard, Mexico’s asylum offer to Julian Assange is still in place and his lawyers are in contact , however, for procedural reasons, the offer cannot be made effective at this time . After ten years, Assange is still trapped in legal situations that have kept him confined all this time and one wonders if the United States will ever allow him to enjoy freedom in a host country.

Less than a month ago, Chinese artist Ai Weiwei posted a video on social media where he runs on a treadmill. It is a campaign that has the hashtag #RunForOurRights and that seeks not only the release of Assange but also to raise awareness about the defense of press freedom and human rights.

Ai Weiwei visited Assange in London in October 2016, while the WikiLeaks founder was in asylum at the Ecuadorian Embassy. Since then, the Australian activist’s health has deteriorated dramatically, even suffering from a stroke a couple of months ago. Thus, while the majority of people who believe in freedom of the press and information advocate that Assange should not die in prison, the United States, a country that calls itself the “defender of freedom” requests 175 years in prison for someone who defended the right to information of citizens. Such hypocrisy!

If things continue as they have in the last decade, it is more likely that we will see an extradition of Assange to the United States in the coming months rather than the approval of asylum in a country like Mexico. If Assange dies in prison, either in England or in the United States, his death should fall on the conscience of the justice systems of both countries and will be one more example of the false narrative of freedom of their societies that the official propaganda wants the world to believe, especially in the case of the United States.

Mexico, for its part, continues to uphold the tradition of asylum and refuge in some of the thorniest and most complicated cases in international geography. In the last century the Spanish Republicans, Jews and Communists and the thousands of Argentines, Chileans and Uruguayans who fled from military dictatorships were received in our country, in the López Obrador government Evo Morales was already given refuge following the coup in Bolivia. Now, the hand is outstretched for Assange and for freedom of the press and information.

If only the asylum could materialize, it would honor all involved international actors and put an end to an act of injustice and arbitrariness that the United States intends to carry out in continuation of its double standards and hypocrisy on freedom issues.