An article by Rick Sterling in Transcend Media Service

US media and politicians have condemned the November 7 Nicaragua election as a “fraud” and “sham”.  On the day of the election, the White House issued a statement saying Nicaragua held a “pantomime election that was neither free nor fair, and most certainly not democratic.”

But are these accusations true? 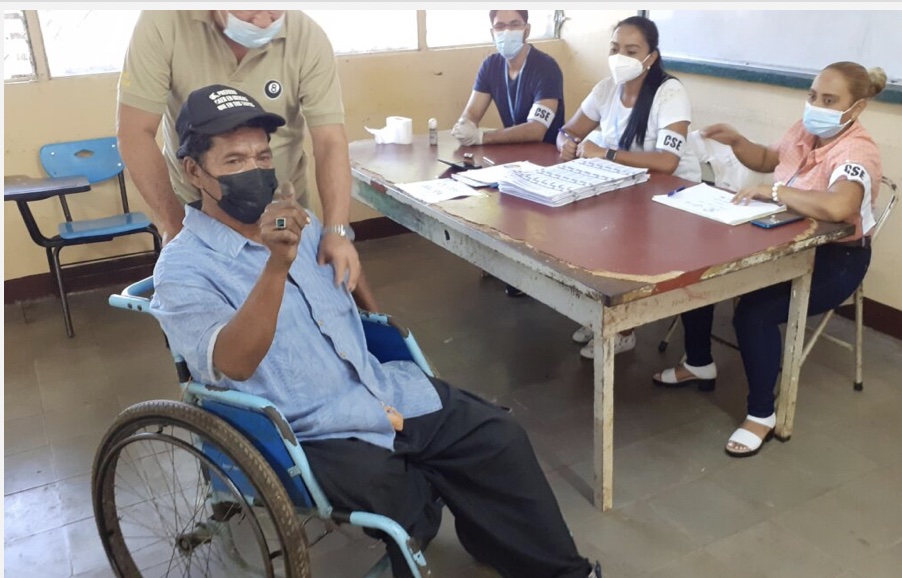 Voting from a wheelchair

Along with other international volunteers, I was an eye-witness to the election last Sunday. Previously I have been an observer in elections in neighboring Honduras.  Here is a snapshot of what I saw:

Our group of 6 people (two from Canada and four from US) visited three voting centers and twenty voting stations in the small city of Juigalpa in Chontales province.

At 7 am Sunday morning, there were long lines of voters.  Hours later, there was still a steady of stream of voters. Election staff said the turnout seemed higher than the last election.

Voters were all ages.. Nicaraguans can vote starting at age 16.  There were lots of families coming to vote together. There were kids playing on swings while their parents voted. There were very old or disabled peopled voting. Family members were allowed to help them if needed. Otherwise election staff helped them.

The process was well organized and efficient.  At the entrance there were staff with computers. They scanned the citizen’s ID card, confirmed the identity and that he or she was registered for this voting center. Then they explained which voting station to go to. The voting station assignments were also printed and taped to walls at the entrance.

A huge number of people staffed the election process.  At each voting station, there were about ten people performing various tasks: two “electoral policia” for sanitary spraying the hands of each voter and to resolve any issues; three people verifying voter ID, recording the signature, and passing out the ballot; two or more “fiscal” from different parties who monitored the process. At each voting center, there were two co-coordinators. At all positions there were equal numbers of men and women.

All election staff wore vests or t-shirts with their official role as part of the Supreme Electoral Council. In Nicaragua this organization is independent of the government and responsible for organizing the election nationwide.

All voters wore masks and proceeded without difficulty, one person at a time. The process was clear: show your identity card and confirm that you are registered to vote in this station; receive an official ballot; mark your choices on the ballot (secretly); deposit your ballot in the ballot box; receive your identity card back;   have your finger painted to indicate you have voted and to prevent double – voting.

The paper ballots were counted at the voting station and verified by all the party representatives. The results were then transmitted electronically to the Supreme Electoral Council headquarters for tabulation of the final results.

Media accusations that FSLN leader Daniel Ortega was running unopposed are blatantly false. The voting ballot was clear and showed six competing parties.  Media reports that the population is fearful of President Daniel Ortega are laughably false and disproven by the large turnout. The final results show a turnout of 65% of registered voters with about 75% of those voting for FSLN.

We asked “fiscal” monitors representing both the Sandinista Front and opposition parties if there had been any problems. Each time they said the process was proceeding calmly -“Todo tranquilo”.  One would-be voter said he had moved and not been able to register his new location because he was too busy working. The voting staff calmly said, “Sorry, you had months to register your new location. You will have to vote at your old residence voting station.”

We asked numerous voters why they were voting. The answers were that the country’s leadership matters, the constitution requires it, and to protect Nicaraguan sovereignty.  “Sovereignty” and “peace” were the most common responses.
It is ironic and hypocritical that US media and politicians, who reject any question regarding the integrity of the US election, smear the Nicaraguan election based on false information. Biased media and information censorship are a major cause of the lack of knowledge and ability of major news outlets to repeat nonsense without correction. An example: While we were in Nicaragua, one of our team members, Dr. Tim Bood from Halifax Canada, was banned from Facebook just for posting a message regarding US interference in Nicaragua.

Washington politicians carry on the long tradition of US interference and aggression against Nicaragua. A few days before the election, the US Senate passed the RENACER Act imposing more sanctions based on false information about the election process in Nicaragua.

The high turnout and vote for the FSLN in the Nicaraguan election shows that the Nicaraguan people are not intimidated by Washington’s bullying and threats.