A press release from the International Peace Bureau

The World Peace Congress organised by the International Peace Bureau (IPB) and the International Catalan Institute for Peace (ICIP) ended this Sunday (October 17) in Barcelona after three days of conferences, workshops, and cultural events. 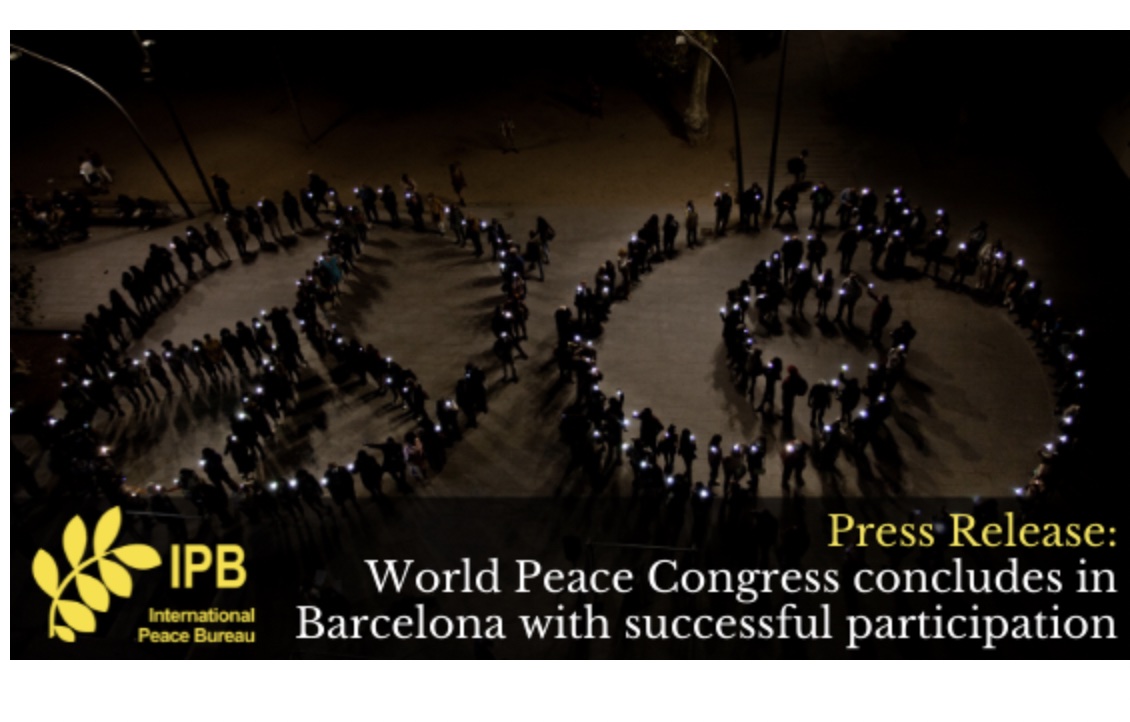 Under the title “(Re)imagine the world. Action for peace and justice”, more than 2,500 people took part in this hybrid congress, with activities in Barcelona. The events took place in the Centre of Contemporary Culture (CCCB) and the Blanquerna – Universitat Ramon Llull, and broadcast on the Internet.

1,000 people attended to the congress in person, while 1,500 attended online. Participants came from 126 countries. In Barcelona, activists from 75 countries including South Korea, the United States, Afghanistan, India and Mongolia, were also able to listen to the speeches covering issues such as nuclear disarmament, climate justice, racism and the rights of indigenous peoples.

As IPB Executive Director, Reiner Braun, explains, this is the biggest international peace event of this year. “The congress was a great success. We got a great support from the city of Barcelona and the president of the government of Catalonia. From my point of view, it was the right congress in this difficult political time and in the right place because we got a big support from the city. The IPB will definitely continue working on the way of more engagement for peace after the congress”.

Jordi Calvo, IPB Vice-President and member of the local committee, affirms: “At the congress we have seen that the peace movement is not alone. The large participation of feminist, anti-racist and global justice movements in the conferences and seminars shows that pacifism is more alive than ever, but that it needs to adapt to new narratives and generations. After this congress, the Catalan, Spanish, European and global peace movement is stronger”

The congress started on Friday 15 October with an event attended by the President of the Generalitat Pere Aragonés and the Mayor of Barcelona, Ada Colau. The opening session was attended by prominent names such as British politician Jeremy Corbyn and ICAN Executive Director Beatrice Fihn. The open plenary can be accessed  here .

Each year, IPB gives the Sean MacBride Peace Prize to an individual or organisation that has done outstanding work for peace, disarmament and/or human rights. This year the award was awarded to Black Lives Matter for the movement’s dedication and work to create a world where the lives of black people can thrive.

On the second day of the World Peace Congress in Barcelona, Rev Karlene Griffiths Sekou, community minister, academic and activist, and director of Healing Justice and International Organizing received the award on behalf of the social movement.

“Our movement is not a moment in time, it is a constant reminder to eradicate white supremacy, change racist policies and overthrow oppressive systems”.

“We thank the International Peace Bureau for their recognition and thank the community leaders, local activists and ancestors, who fuel the relentless will of our movement and inspire us to re-imagine a world for our children and for future black generations,” she added.

Photos from the congress:

You can access the photos of the congress via this  link.

You can find all the press releases and the final declarations  here.