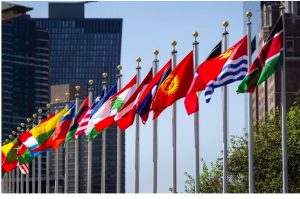 A negative and pessimistic view is provided in the blog Democratic participation is advancing – from below:

At the level of the nation state, there is no progress. Instead, we are going backwards. More and more the American model is being imposed at the level of the state: a two-party system with alternation of electoral victories for the two sides, both of which are controlled by “big money”, i.e. the capitalist class. This is accomplished by control of the mass media. Voters are given the “choice” of two capitalist alternatives and are forced to vote for the “lesser of two evils.” Electoral candidates at the national level spend millions of dollars and are usually millionaire capitalists themselves. A few exceptions are elected from time to time, but they have only a few votes against hundreds of others that simply represent the interests of the capitalist class.

As a result, the budget of the modern state is largely devoted to preparation for war since military domination is necessary for the success of the capitalist class. Not surprisingly, since it heads up the American empire, the most extreme example is the United States where more than half of the national budget is devoted to the military expenditures, nuclear weapons and interest payments on previous military expenditures.

But perhaps there are exceptions to this negative picture.

Here are some CPNN articles and discussions that support a more positive view.

Discussion question: Does Costa Rica have a culture of peace?