A press release from APO reprinted by Africa Newsroom 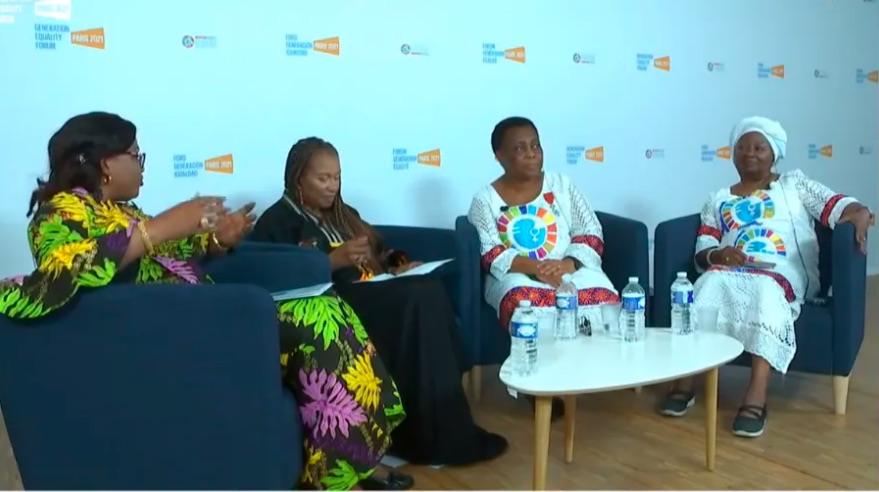 A delegation of African women led by Her Excellency Madame Gisèle Ndaya, Minister of Gender, Family and Children of the Democratic Republic of the Congo and Madame Julienne Lusenge, gender expert on the Panel of Experts in charge of accompanying President Félix-Antoine Tshisekedi Tshilombo during his presidency of the African Union for 2021/2022 shared the proposed Kinshasa Declaration on the sidelines of the Generation Equality Forum (bit.ly/3wdRHDZ)  being held in Paris from June 30 to July 2.

The proposed Kinshasa Declaration, drafted during the Conference on Gender Equality held in Kinshasa on June 10, is the result of a large mobilization of pan-African groups including youth, civil society, researchers, government officials, activists and international organizations. One of the main objectives of the conference was to show the collective capacity of the participants and organizers  to foster a more just world, where gender equality is no longer a struggle but a reality for future generations.

The proposed Kinshasa Declaration builds on existing texts on gender equality in Africa and a series of new recommendations. Its goal is to encourage the member states of the African Union to expand their actions in favor of gender equality and to put in place strong systems to evaluate progress.

For the Minister of Gender, Family and Children of the DRC, Ms. Gisèle Ndaya, this declaration offers concrete proposals for the member countries of the African Union. She highlighted that “one of the key recommendations of the declaration is to campaign for a quota system of at least 40% of women, including 10% of young women under 35 years of age in national government bodies, and in elective and nominative positions, by 2030, in order to increase the rate of women’s participation in decision-making bodies on the African continent. ”

Julienne Lusenge, member of the Panel of Experts in charge of accompanying the DRC during its chairmanship of the African Union for the year 2021/2022 said: “This proposed declaration makes a crucial contribution to the AU Strategy for Gender Equality and Women’s Empowerment by proposing concrete actions and tools for measuring success towards gender equality in Africa by 2030. Through this proposed Declaration, we call for, among other measures, the development and strengthening of human rights and culture of peace curricula in at least 50% of primary and secondary schools, including the integration of age-appropriate information on existing laws, conventions, and action plans with a focus on gender equality and positive masculinity by 2030. ”

According to the delegation, the proposed Kinshasa Declaration will be shared with African Union stakeholders, member states, civil society, international organizations and relevant bodies within African governments after the Generation Equality Forum. The objective is to the adoption of this Declaration at the next meeting of the African Union in 2022.