In a bid to put gender equality at the heart of COVID recovery, UN Women kicked off a three-day “landmark effort” in Paris on Wednesday, aiming to lay out ambitious investments and policies to bridge the chasm between where women stand in the world today, and where they should be, by 2030.
“Gender equality is essentially about power, and power in a world that is still largely male dominated, with a culture that is still largely patriarchal”, Secretary-General António Guterres said at the Generation Equality Forum, launching a “five-year action journey”, based on the UN Global Acceleration Plan for Gender Equality. 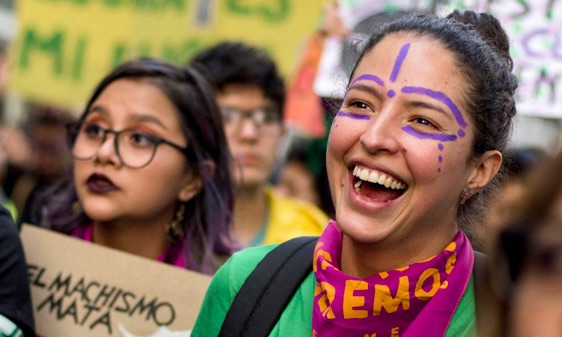 UN Women/Johis Alarcón People protest in a demonstration for women’s rights in Ecuador.

Noting that “power is very rarely given. You have to take it”, he stressed as one of his five priorities, the importance of parity to redistribute power and create the necessary conditions for true equality.

The UN chief said that to achieve equal rights, discriminatory laws around the world must be repealed and transformed into ‘de facto’ equality.

He said women in the informal economy, were “paying a heavy price for the pandemic”, also highlighting economic equality in pay, employment, and social protections.

Noting a surge in violence against women and girls during COVID, Mr. Guterres said that putting an end to it must be “a central element of all policies and all of our objectives”.

Finally, he highlighted the importance of intergenerational dialogue as “another fundamental instrument for gender equality” to allow young people to be a part of decision-making in today’s digital society.

Women worth more than a quarter

In her statement, UN Women Executive Director Phumzile Mlambo-Ngcuka, said that “women everywhere in the world are squeezed into a small corner”.

She highlighted how they make up a quarter of all managers, parliamentarians, climate change negotiators and “less than one quarter of those who negotiate peace agreements”.

Generation Equality is about change, the UN Women chief said, it’s about “moving from making promises” to saying what has been done to advance women worldwide.

She detailed that Member States, the private sector and others, have made nearly 1,000 commitments to change the lives of women, including to change policies.
However, Ms. Mlambo-Ngcuka continued, “the fight still has to continue…We need to be pushing upwards all the time, so that there is a race to the top”

(Click here for the article in French or here for Spanish.)

The UN Women chief concluded by detailing that countries of the Global South, regional organizations, young people and civil society groups, have all “put their foot forward” raising $40 billion, saying “and we are still counting”.

Meanwhile, Chancellor Angela Merkel declared that Germany “is actively involved in the Action Coalition on Economic Justice and Rights” and would invest an “additional €140 million, making a total of around €240 million in the International Action Coalition”.

And the Bill and Melinda Gates Foundation announced that it would spend $2.1 billion to advance global gender equality.

At the same time, the UN Educational, Scientific and Cultural Organization (UNESCO) launched a set of commitments  to achieve “tangible progress” towards gender equality over the next five years.

UNESCO chief Audrey Azoulay had called upon women worldwide to “take control and full leadership in every aspect of life and domain of society to build back a better future for all”.

Co-hosting the event, French President Emmanuel Macron said that the struggle for gender equality is “far from won”.

“It’s a battle today, but tomorrow it must be a matter of fact”, he underscored.

His counterpart, Andrés Manuel López Obrador, President of Mexico, said: “We must continue to fight against sexism. We must not forget economic and social equality, which is fundamental to achieve a better society”.

Call to action from Clinton, Harris

United States Vice President Kamala Harris, warned that “democracy is in peril” around the world.

“I believe, resolutely, that if we want to strengthen democracy, we must fight for gender equality…Democracy is strongest when everyone participates – and it is weaker when people are left out…without doubt, gender equality strengthens democracy”, she said.

At today’s meeting she sent a message that “it’s no longer enough to talk about women’s rights…[as] they are nothing without the power to claim them. And we know that when women have the power to raise our voices, assert our rights, and rebuild economies, everyone will be better off”.

Marija Pejčinović Burić, Secretary General of the Council of Europe, drew attention to the Convention on preventing and combating violence against women, or the Istanbul Convention.

“Last year, we saw a surge in domestic violence during COVID lockdowns. The Convention provides three advantages that no country alone can: it raises national standards; provides a monitoring mechanism; and ensures co-operation between governments in the prosecution of these crimes”, she said.