Mexico City is preparing to celebrate the Third Culture Meeting of Peace from June 12 to 25 this year through the social program “Cultivating Art and Culture in Tlalpan,” the organizers reported today. 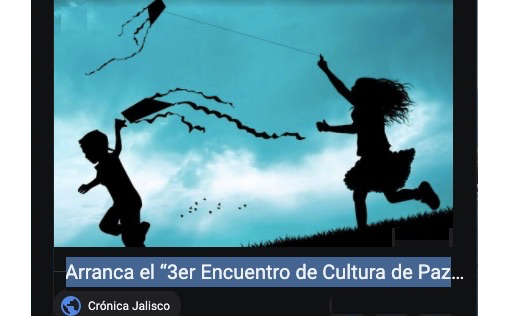 A poster from Cronica Jalisco

In a press release they indicate that the program will start with a series of activities broadcast on the social networks of the mayor of Tlalpan – one of the 13 municipalities that make up the Mexican capital. It will include three segments: videos, talks and a course-workshop , as well as the presentation of a documentary.

The organizers explain that there will be talks, conferences, children’s forums, audiovisuals, debates around Covid-19 and its effects on children, public space and community cultural life.

Human rights personalities, the academy of institutions such as Mexico City, the Autonomous University, the Spain Cultural Center and the Ministry of Culture, as well as local cultural managers from Querétaro and Michoacán, among others, will actively participate in the 13 days of culture.

The Mayor’s Office of Tlalpan, through the Subdirectorate of the Arts and Crafts Centers, attached to the General Directorate of Cultural Rights where this unprecedented meeting was born, will raise the issue of how the confinement has affected children, as well as vulnerable groups and what are their consequences.

They will also include the importance that art, the culture of peace, the public space have for people’s daily lives, in these moments of virtuality and massive confinement.

Other aspects to explore are the types of social relationships and affections developed by those who are in contact and in communication with some cultural or artistic social program, online during confinement, compared to those who are not.

This third Culture of Peace meeting will have the participation of Nashieli Ramírez, president of the Human Rights Commission of Mexico City, and numerous professors and researchers specializing in childhood issues and public space.