An article from Le Nouvelliste (translation by CPNN)

The National Commission for Disarmament, Dismantling and Reintegration (CNDDR) is organizing this week, at the Karibe Hotel, a three-day workshop to finalize and validate of the national disarmament, dismantling and reintegration strategy document for the reduction of community violence . Discussions are taking place on May 12, 13 and 14. The workshop benefits from the support and logistics of the United Nations Integrated Office in Haiti (BINUH). 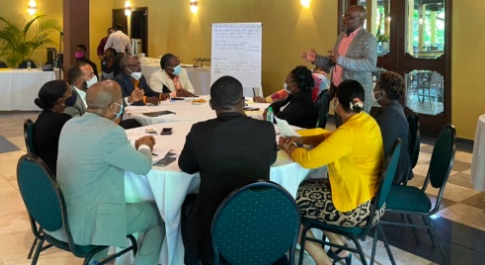 Are the people of Haiti making progress toward a culture of peace?

According to the secretary general and spokesperson for the CNDDR, Greatz Sironel Charles, this workshop brings together the government bodies that are involved in disarmament work. “To carry out disarmament, there needs to be synergy between the Minister for Human Rights and the Reduction of Extreme Poverty, the Ministry of Planning and External Cooperation, the Ministry of the Interior and Territorial Communities, the Ministry of Justice and Public Security, the Ministry of National Education and Vocational Training through the INFP, the national police, the Ministry of Social Affairs, the office of the Secretary of State for the Integration of persons with disabilities, and the Ministry for the Status of Women. These are the partners who are meeting with us during the 3 days. They will be responsible for implementing the programs, while the CNDDR is a technical decision-making body, ”said the spokesperson.

Greatz Sironel Charles continued by stressing that the CNDDR will coordinate while the other bodies will implement in order to succeed in disarmament. “In an institutional approach, everyone must play their part. This will allow us to achieve the establishment of a culture of peace in the country. This will allow economic recovery at all levels, ”she said.

The secretary general and spokesperson for the CNDDR stressed that the document on the national disarmament strategy has already been submitted to the government for more than a year. “On April 6, we created a task force at the level of the ministries to monitor it. We are in the process of finalizing the document before making it public. The strategy is based on three axes: socio-cultural, economic and political… The representatives of the different bodies have made commitments in order to better facilitate the implementations ”, she declared, stressing that she hopes that the strategy will be implemented as soon as possible.