An article from the BDS Movement

In many countries, governments and corporations are deeply complicit with Israel’s decades-old regime of military occupation, settler-colonialism and apartheid, just as they were complicit in the apartheid regime in South Africa. Israel can only sustain this regime of oppression with international complicity. 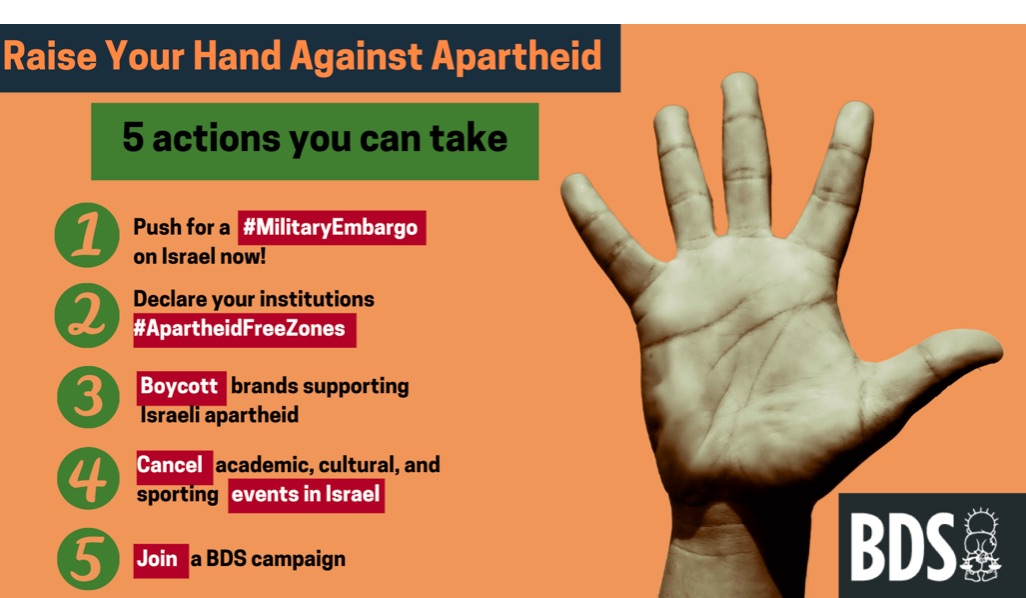 Here are the 5 most effective things YOU can do to challenge this complicity and support the Palestinian struggle for freedom, justice and equality:

1. Work with progressive networks to pressure parliament and government to (a) end all military-security cooperation and trade (military funding in the US case) with apartheid Israel and similarly criminal regimes of oppression worldwide, (b) ban all goods/services of companies operating in Israel’s illegal colonial settlements; and (c) demand a UN investigation of Israeli apartheid.

2. Mobilize pressure in your community, trade union, association, church, social network, student government/union, city council, cultural center, or other organization to declare it an Apartheid Free Zone (AFZ), ending all relations with apartheid Israel and companies that are complicit in its system of oppression.

4. Cancel all academic, cultural, sports, and tourism engagements in Israel or supported/sponsored by Israel (or its lobby groups and complicit institutions).

5. Join a BDS campaign or a strategic Palestine solidarity group near you to act collectively and effectively.

Channel your anger and mobilize to dismantle apartheid and all forms of racism and oppression.