The signing ceremony for a partnership between the Catholic University of West Africa – University Unit in Bamako (UCAO-UUBA) and the Alioune Blondin Beye School of Peace-Keeping (EMP). was held Tuesday March 2. The objective is to promote scientific research and training for a culture of peace by the two organizations in terms of ideas and actions. 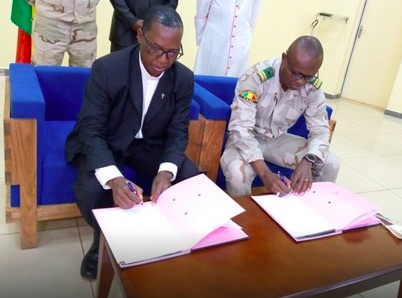 The Minister of Higher Education and Scientific Research, Prof. Amadou Keïta, accompanied by the Archbishop of Bamako, Cardinal Jean Zerbo, chaired the ceremony in the conference room of the EMP.

According to Abbé Clément Lonah, president of the UCAO, this partnership will be of considerable advantage in placing particular emphasis on the increased training of learners on both sides. UCAO is a network of university units located in several West African countries such as Burkina Faso, Benin, Côte d’Ivoire, Guinea, Mali, Togo and Senegal. Its Rectorate is located in Ouagadougou. The objective of this institution, he says, is to promote excellence, sub-regional integration and the pooling of skills.

By signing this agreement with the School of Peacekeeping, Abbé Clément Lonah, president of the UCAO, believes that his establishment has made an ideal partner to achieve its ambitios in West Africa.

“Ambition of excellence in scientific and human training, ambition of sub-regional integration by allowing the mobility of students and teachers in the area of ​​West Africa, ambition of pooling skills by bringing together scientists in a university space to provide quality education, ”he said.

For Father Clément Lonah, the University Unit in Bamako (UUBa) of the UCAO is specialized in the Sciences of Education, while developing other fields, such as Law, Journalism and Communication, Sciences Humanities (Philosophy) and Economics and Management.

For his part, the Director-General of the School of Peacekeeping Alioune Blondin Beye, Colonel Souleymane Sangaré, indicated that the common points between the two entities are considerable assets which would undoubtedly favor the establishment of a more realistic and operational partnership. “These two schools are all committed to sharing, training and educating men and women who will serve as examples and always advocate peace instead of violence,” he said.

The Minister of Higher Education and Scientific Research, Prof. Amadou Keïta, affirmed that this partnership signature is in line with the vision of the highest authorities of the transition for scientific research and the culture of peace . According to him, it comes at a decisive moment which marks the first step and will allow pupils and students to benefit from an international standard of education in the culture of peace.

In conclusion, Minister Kéita recalled that the culture of peace is a set of values, attitudes, behaviors and lifestyles that reject violence and prevent conflict by addressing their root causes through dialogue and negotiation.