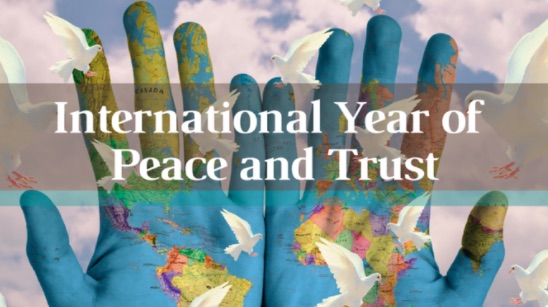 The heads and representatives of the United Nations and its structural agencies, Economic Cooperation Organization, Commonwealth of Independent States, Comprehensive Nuclear-Test-Ban Treaty Organization, as well as other regional and international organizations, and foreign mass media participated to the event via videoconferencing.

During her opening remarks, the Acting UN Resident Coordinator in Turkmenistan, UNICEF Representative in Turkmenistan Christine Weigand noted the importance of the International Year of Peace and Trust initiated by the President of Turkmenistan for the sake of sustaining peace, stability and mutual understanding between people which is the key to sustainable development.

In continuation of the topic, the Deputy Chairman of the Cabinet of Ministers, Minister of Foreign Affairs of Turkmenistan Rashid Meredov underlined that the unanimous adoption at the 73rd session of the UN General Assembly of the Resolution declaring the year 2021 as the International Year of Peace and Trust has become a reflection of the efforts of the permanently neutral Turkmenistan calling for strengthening of the culture of peace and trust in the international relations. ‘Putting forward this idea, the Leader of Turkmen nation has specifically stated that it has a concrete nature and thus urged the international community to reinforce the adopted document with practical content, enrich it with real actions,’ said R.Meredov. The head of the MFA of Turkmenistan underlined the significance of applying the means of diplomacy, the political dialog based on mutual understanding and cooperation in the advancement of friendly ties between countries and people and to achieve this Turkmenistan actively cooperates with the international partners.

Speaking at the opening ceremony Special Representative of the UN Secretary General for Central Asia, Head of the UN Regional Centre for Preventive Diplomacy for Central Asia Natalya Gherman underlined the importance of the International Year of Peace and Trust, which meant greater cohesion for the sake of peace and prosperity of the world community.

The timeliness of the International Year of Peace and Trust was also highlighted in the speech of the President of the 75th Session of the United Nations General Assembly Volkan Bozkir. Thanking the Government of Turkmenistan for initiating the International Year of Peace and Trust, he underlined that in view of the global situation, the need in peace and trust is high as never before. Mr. Bozkir urged the international community to continue cooperating through political dialog and solidarity on the way to peace, security and sustainable development.

His words were complemented by the Permanent Representative of Turkmenistan to the United Nations Aksoltan Atayeva who noted the efficiency of peaceful initiatives of the President of Turkmenistan that help to attain the Sustainable Development Goals.

The Minister of Foreign affairs of the Republic of Azerbaijan Jeyhun Bayramov highlighted in his speech the specific need in conducting International year of peace and trust which calls upon to activate efforts and activity on advocating the culture of peace.

In her speech the Head of the OSCE Center in Ashgabat Natalya Drozd spoke about the importance of strengthening the culture of peace and trust.

The Secretary General of the Economic Cooperation Organization Hadi Soleimanpour also gave a speech at the event. He highly appraised the level of cooperation between Turkmenistan and the ECO, as well as emphasized that the economic progress is inseparably linked to the security in the region and in the world, and to attain this it is necessary to strengthen trust between countries and people.

About the importance of strengthening peace and trust between countries and people has also spoke the Chairman of the Executive Committee – Executive Secretary of the Commonwealth of Independent States Sergey Lebedev. He highlighted the effective role of Turkmenistan in the development of friendly ties not only in the region, but also in the whole world.

The Director-General of the UN Office at Geneva, Secretary-General of the Conference on Disarmament Tatiana Valovaya and the Executive Secretary of the Preparatory Commission for the Comprehensive Nuclear-Test-Ban Treaty Organization Lassina Zerbo highly appraised the role of Turkmenistan in the development of friendly and constructive ties between countries.

In turn, the President of the General Conference of UNESCO Altay Cengizer and Assistant Director-General for the Africa Department of UNESCO Firmin Edouard Matoko emphasized the timeliness of holding the International Year of Peace and Trust. They noted that the notion of peace and trust are the keystones of international cooperation.

Furthermore, the UNODC representative, Permanent representatives of Afghanistan, Belarus, Kazakhstan, Nepal, Indonesia and Bangladesh at the UN have underlined the importance of conducting International year of peace and trust in the context of fully strengthening solidarity and mutual support on regional and global levels to create cohesion for addressing pressing issues of present.