An article by Agostino Petroni in Yes Magazine

A community in Colombia is ditching traditional capitalist models in order to build a collective future. 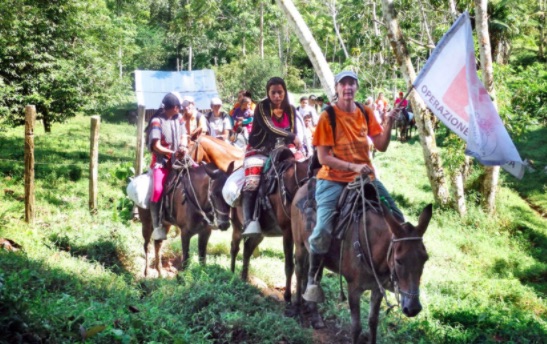 Volunteers of the nonprofit organization Operazione Colomba accompanying some members of the Peace Community to Mulatos village.

When it’s time for harvest, Germán Graciano Posso, a 38-year-old Colombian farmer, leaves his village, La Florencita, with a group of co-workers and heads into the hills where the cacao trees grow surrounded by a lush rainforest. Cacao pods the size of giant lemons hang off the trees’ branches: They come in various colors—green, red, and purple—but tend to turn yellow when they ripen. Posso harvests the fruits by hand, cracks them open with a machete, and collects the grape-sized seeds, which are covered in a white, squishy casing. Then he places the seeds in a wooden box where the casing undergoes a process of fermentation. Finally, Posso spreads out the seeds on a flat surface to dry in the sun. After eight days of drying, they will be ready to become chocolate.

This might seem a common agronomic practice, no different from the one conducted by other cacao growers worldwide, yet it carries a greater significance in this northwestern corner of Colombia.

Posso belongs to the Comunidad de Paz de San José de Apartadó, a conglomerate of villages scattered in Urabá of Antioquia, one of Colombia’s deadliest areas. For more than five decades, from 1964 to 2016, a bloody internal war between the Colombian army, right-wing paramilitary groups, and FARC (the Revolutionary Armed Forces of Colombia) killed more than 200,000 people. In this war dictated by drug-traffickers’ interests (both FARC and right-wing paramilitary groups financed their fight by growing coca and trafficking cocaine), farmers were among those who paid the highest toll. Over the past half-century, the United Nations estimates, more than 7 million Colombians—in a country of 49 million—were displaced by the war.

However, resisting the relocation trend, in 1997 the San José de Aparadó farmers declared themselves a peaceful community, neutral to the conflict, and chose to stay in their territory. Their decision carried violent consequences for the community: threats, sexual assault, kidnappings, torture, forced disappearances, assassinations, and massacres. Posso himself suffered the killing of 13 family members, and in 2017, he said, he survived a murder attempt.

Two decades after its declaration of neutrality, the community still carries on its peace crusade. Despite many difficulties, they are hanging on to their collective work thanks to the precious cacao cultivation.

“This is a life project,” Posso says. “We’re not doing this only for ourselves, but also for the new generation.”

The Risks of Existence

In the ’70s, cacao production expanded around San José de Apartadó, adding to the corn and beans that were cultivated for subsistence there, and quickly became the area’s principal cash crop. In 1985, a group of farmers, supported by the leftist party Unión Patriótica, founded Balsamar Cooperative, seeking better terms for the sale of their product. They built facilities and bought trucks, paying higher prices for the cacao from the area because they could cut out intermediaries and sell the cacao directly to Luker, a Colombian chocolate company. The farmers of San José, seeing the profit, started planting more cacao trees.

The land on which the cacao trees grew didn’t just interest farmers but also paramilitary groups, the FARC, drug-traffickers, landowners, and the army. The fertile soil was great for illicit coca cultivations, and proximity to Panama made it a natural smuggling corridor to North America. In the early ’90s, the various groups started taking hold of the area and threatened social groups such as the Balsamar Cooperative.

In 1996, all of the local leaders of the Balsamar Cooperative and other social groups were either assassinated or fled for their lives. Just being in the territory was a danger: If an armed force set up a base camp close by, the opponents would often accuse the farmer who happened to live there of supporting the other group and murder them. A large proportion of the 7,000 residents of San José de Apartadó fled, which quickly reduced the community to 500.

On March 23, 1997, Brígida Gonzáles, 69, along with the others who decided to stay, founded the Comunidad de Paz de San José de Apartadó. This “Peace Community” declared itself neutral in the conflict, pledging not to get involved in any way—from acting as informants to cultivating illicit crops—and asked to be left in peace. Anybody who was willing to comply with those rules was allowed to be part of the community.

“We had already suffered more than 300 deaths, forced disappearances, and displacements,” says Gonzáles, who today is one of the community leaders. Like the rest of her community, her personal losses are many: She lost 17 relatives to the war, including two sons and three siblings, some of whom were militarized by the FARC.

The new neutrality status did not last long. A week after the declaration, members of the community were forced out by the conflict. The cacao trees were abandoned, and the forest took them back.

But San José farmers had been subsisting on that agriculture and their cacao sales: Staying away from the fields meant economic ruin. After a few years of abandonment, the community decided to go back to their land slowly.

Tending to the fields alone was too dangerous because a disappearance could easily go unnoticed, so they organized daily trips to the Peace Community in groups of 50 or 100 to take care of the cacao trees and harvest their fruits. That was the beginning of the peaceful communal effort to regain their territory. What started as protection mechanisms soon became part of a broader philosophy of life.

Gwen Burnyeat, a political anthropologist at the University of Oxford, in England, who has studied the Peace Community, says that the concept of community is a reaffirmation of how they live, work, survive, and build peace together.

“You have a really interesting solidarity economics model in which you have individual economics interacting with a kind of collective economics,” says Burnyeat, who published a book in 2018 called Chocolate, Politics and Peace-building  and produced  Chocolate of Peace, a documentary about the role of cacao in the Peace Community. Members of the Peace Community have some individual land, but most of the 150 hectares of cacao trees grow in collectively owned plots. Members gather in small groups to tend the different plots, and every Thursday they do any work the community might need, from repairing a roof to planting more cacao trees. All of the produce from the community-owned crops goes into a collective pot, and then the community decides together how to distribute the funds.

“To them, this is actually a very profound act of transcending traditional capitalist society models and building something together,” Burnyeat says.

The Peace Community is known internationally thanks to the support of nonprofit organizations such as Peace Brigades International and Operazione Colomba. And because of the outside support, the community was able to enter the Fair Trade network and sell their cacao abroad for higher prices. According to Posso, the community sells about 50 tonnes of organic cacao a year to Lush, a British cosmetic company that makes soaps and other products with their cocoa.

But according to Burnyeat, the visibility brought by the nonprofits is an advantage that few other communities have, and she believes it provides a protection mechanism that is unsustainable in the long term. Plus it’s a double-edged sword: The community openly denounces the crimes against humanity on their official website, but this visibility also increases the risk of reprisals, like in 2005, when eight community members, three of them children, were slaughtered  by a group of paramilitary and army soldiers. Since then, the community has ended any interaction with the Colombian government.

In 2016, FARC, the revolutionary paramilitary group that had carried out the bloody war against the state for decades, signed a long-awaited peace accord with the government of former President Juan Manuel Santos. The agreement deeply polarized the country but marked a historic moment for Colombia.

However, four years later, the peace is shaky, failing those it pledged to protect: According to a 2019 report of Colombia’s Institute of Studies for Peace and Development, 700 community leaders have been murdered since 2016.

The Peace Community, in addition to suffering this new wave of violence, is also under the threat of losing their communal land from a state project of agrarian reform, according to Germán Romero, a lawyer with dhColombia, a nonprofit organization in charge of representing the community in court to seek justice for the violence they have experienced.

“We’re trying to keep the integrity of the territory,” Romero says. He says the community has survived physical extermination but might not survive the state’s project of redistribution of land. Local politicians and entrepreneurs who are against the community accuse them of having stolen the lands they cultivate, a claim Romero dismisses.

Losing the land that gives them the fruits of hope might mean the community’s end. But by continuing to harvest cacao, the community is stating, season after season, their right to live in the place they call home.

“The world is tired of war,” says Gonzáles, the community’s founder. “Why don’t they leave us in peace?”