Assuming that it will not be a short task, the President of the Republic, Luis Abinader reported today his plans so that what he described as “wrong and violent machismo” in the country can be eradicated. 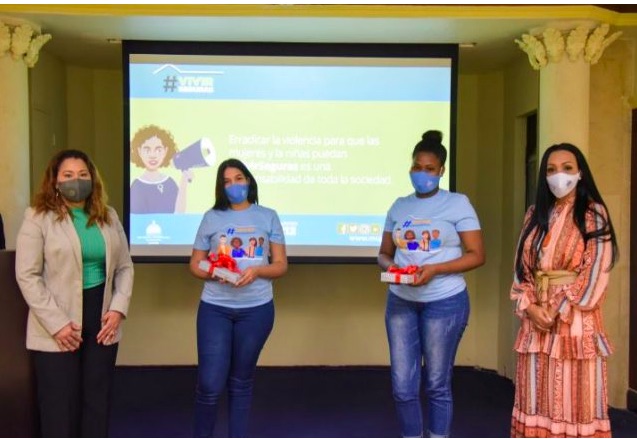 Prize-winners of contest “How to Eliminate Violence against Women, Adolescents and Girls”

While answering questions about the cases of femicides that occur in the Dominican Republic, where there are already at least two women killed at the hands of their partners or ex-partners, the president spoke of the great concern that the issue constitutes for the Government.

He recalled that in his administration two shelters have been created for women victims of gender violence, although he recognized how difficult it was to put them into proper operation at that time.

He also mentioned the preparations they are making for the formation of a specialized body of the National Police dedicated to the protection of women at risk.

“… It’s an issue that is going to take years and that must begin at some point is an education, from schools, going to high schools and throughout the country, a great campaign to promote a culture of peace, a culture of eliminating the wrong and violent machismo ”, said the president who understands that the Dominican is a country of good people.
. .

The Ministry of Women awarded winners of the contest “How to Eliminate Violence against Women, Adolescents and Girls”, within the framework of its Vivir Seguras campaign with the aim of proposing positive actions so that women and girls can Live Safely.

At the event held in the Mirabal Sisters Room of the National Palace, Mayra Jiménez, Minister of Women, and Juana Damaris José, Vice Minister of Violence Prevention, handed out tablets to the young Ana Santana, who obtained first place with 368 likes, and Leidy Mojica who obtained second place, with 292 likes.

Minister Jiménez congratulated and greeted the efforts of the participants, thanking the family of the winners for their work, through positive upbringing that promotes a life without violence for women, adolescents and girls in their homes, schools, places of work and public spaces.

“This experience represents a great opportunity to think and collectively build solutions to foster creativity among adolescents and young people that contribute to the construction of a culture of peace that allows us to live in a civilized way,” said the Minister for Women.

She called on Dominican families to reflect on the importance of eradicating violence and knowing the complaint channels, since she understands that eliminating violence against women, adolescents and girls is a responsibility of the entire society. . ..

Thanking the Minister, prize-winner Leidy Mojica stated that, “if a woman does not love herself, she is not capable of loving others either and that it is important to carry the message so that everyone receives information on how to prevent violence towards women and young women as well ”.

The other prize-winner, Ana Santana, indicated that “through the contest she was able to learn more about the harassment suffered by women with compliments that offend instead of pleasing.”

The Minister for Women pointed out that due to the pandemic, a larger public event could not be held, but that this did not mean that it was not important, while leaving the doors open for young people like Ana and Leidy to inspire them to participate in other initiatives of the Ministry of Women and to dream big in order to occupy positions in the future, from which they can contribute to the construction of a society free of violence.

Adolescents between the ages of 14 and 16 participated in the contest, who made videos, with content-based audiovisual messages to prevent violence against women, adolescents and girls.