Remarks by Armando Vargas Araya, Ambassador of Costa Rica in Australia to a
Webinar on the occasion of the 72nd anniversary of the abolition of the army in Costa Rica. Australian National Center for Latin American Studies, Canberra, December 1, 2020. 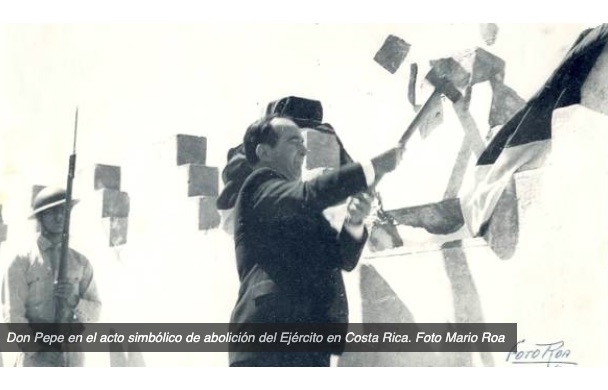 The history of 72 years without a permanent army in Costa Rica, demonstrates in a convincing way that it is possible and positive to organize a State on the principles of mutual trust, peace and non-violence. Furthermore, it is consistent proof that the military, the spending on arms and wars of aggression are incompatible with the construction of a culture of peace. Nations can enjoy internal security and external defense guaranteed by the institutions of democracy, the rule of international law and multilateral organizations. The decision to abolish the army is an act of good sense, of civilizing exaltation and a bet on the common sense of human cooperation.

On transferring the Bella Vista barracks to the Ministry of Education for the National Museum, statesman José Figueres said on December 1, 1948: “We are supporters of the ideal of a new world in America. To that country of Washington, Lincoln, Bolívar and Martí, we want to say today: Oh, America! Other peoples offer you their greatness. Little Costa Rica wishes to offer you its love for civility and democracy.”

On that bright day, long-desired ideals came true. In 1825, four years after achieving independence from the Spanish Colonial Empire, the first Head of State Juan Mora Fernández warned, «”The public force – which in other States is an indispensable element of the Government – has sometimes been an ominous instrument of tyranny, a dark source of anarchy and disorder, or a plague that has devoured men and their property. Our State relies on the free consent of its children. Our militia is composed of honest citizens, peaceful farmers, artisans and workers honestly and constantly dedicated to their particular tasks … who have no other aspiration than to fulfill their domestic duties and defend the State when the authority calls them.” And in 1891, the leader of radical liberalism Félix Arcadio Montero proposed: «There will be no permanent army when peace reigns. To maintain order and ensure the safety and tranquility of citizens, the institution of the police is established.”

As stated by the French historian Fernand Braudel, “That rural town of 825,000 inhabitants, a true republic of coffee grown on the steep mountain ranges of the center of the country – where the frequency of obstacles forces us not to take our eyes off the road and to always keep our footing – chose the course of work and peace. The mountain is the refuge of freedoms, democracies and the ‘peasant’ republics’.”

Does Costa Rica have a culture of peace?

Here are five, among many, benefits from the abolition of the army.

Greater investment of economic resources in educational and social programs: 7.4% of GDP in education, 7.36% in public health, life expectancy of 80.4 years.

– World recognition as a free, democratic and peaceful nation: two external armed invasions repelled, without reestablishing the army. In the Central American security crisis of the 1980s, hegemonic pressures were resisted to restore the army.

– Institutional and political stability: since 1948 there have been 71 coups d’état in Latin America, none in Costa Rica. Eighteen consecutive presidential elections and counting.

– Attraction of foreign direct investment: US $ 2,764 billion (2018), the eighth largest recipient of FDI in Latin America.

The abolition of the army was not an isolated event but the consequence of a national trajectory. It is a dynamic process that requires adjusting to changing conditions and challenges such as rising ocean levels due to climate change, threats to public health due to viral pandemics, the exploitation of our marine wealth by foreign fleets, the indiscriminate destruction of biodiversity, terrorism and concomitant crime (attacks cybernetics), the weakening of multilateralism and new subtle forms of hegemony. Defining and updating a National Security and Defense Doctrine is a complex task as there are no examples to emulate. Demilitarization is not a bed of roses.

Costa Rica’s trajectory continues with the development of legal institutions and human rights linked to peace. In the most recent four decades, the republic made a legal commitment to the international community to comply with strict neutrality, expanded fundamental rights to include the right to peace guaranteed to each inhabitant, prohibited the manufacture and import of weapons of war, decided to educate to the new generations in a culture of peace and mutual trust, hosted the headquarters of the University for Peace. In multilateral forums, it has promoted initiatives such as the Arms Trade Treaty, the Central American Peace Plan or the Treaty on the Prohibition of Nuclear Weapons. With good reason, the candidacy presented by Scandinavian academics and parliamentarians for five consecutive years prospered, when the People of Costa Rica were awarded the 1987 Nobel Peace Prize.

In their struggles for peace and mutual understanding. Classical Greece and the Helvetic Federation guided the course of humanity. Like them, in the future, these nations located in the Caribbean Sea, Central America, Europe, the Indian and Pacific Oceans could also do.

A Mediterranean philosopher advanced: “If humanity writes the future, not with blood, but with spirit, Costa Rica, I predict, will contribute in a valuable way to the rational and reasonable reunion of men.” Our conviction is that, in the space of ideas and the perspective of constructive initiatives, there are no large, medium or small countries: all States are equal. War and peace affect us all equally. Blessed are the peacemakers.