An article from Diario Portal (translation by CPNN)

The municipal government of Toluca continues with firm steps towards its goal of building a more just society and with a culture of peace, in which the general well-being is promoted and violence is prevented. An example of this are the more than 150 Centers of Peace that it has established up to now. 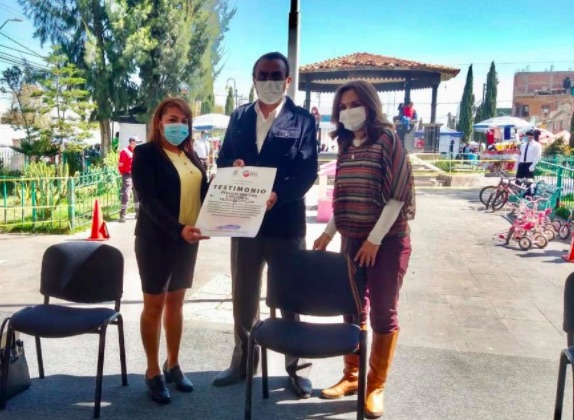 Formed under the Municipal Plan for the Promotion of Peace, Development and the Environment at the initiative of Mayor Juan Rodolfo Sánchez Gómez, this project was implemented with trained people, called Agents of Peace and Development, who can meet the needs of each space promoting peace

During the contingency due to COVID-19, municipal personnel have worked hard, with the necessary sanitary measures, and constituted 113 Peace Centers, 35 of them in schools including the “Josefa Ortiz de Domínguez” Elementary School in the evening shift, the Executive University of State of Mexico, the Paulo Freire School and the “David Paul Ausubel SC” Educational Institute, to name a few.

These institutions are in addition to the Peace Centers established before the pandemic, 40 in total: 26 schools, five delegations, two churches and seven companies.

As part of the program, specialized municipal staff in the respective institution elaborate a diagnosis and the factors they wish to influence, to later establish a specific program designed to meet the needs of the population in each environment, in order to increase the factors to protect peace and to reduce risk factors.