An article from DW Akademie

Several thousand people marched in French cities on Saturday to protest a draft law that would make it a crime to circulate an image of a police officer’s face with the intention that they be harmed, in a move condemned as an afront to press freedom. 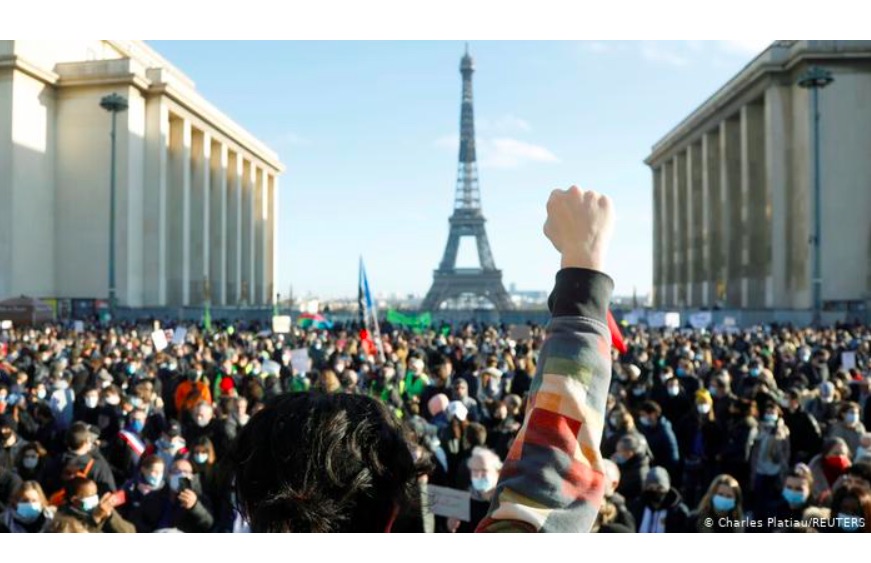 The largest gathering was at the Trocadero Square near the Eiffel Tower in Paris. Journalist groups, as well as the Yellow Vest and Extinction Rebellion movements, and demonstrators waving flags of the communist and green parties attended the protests.

Thousands of protesters chanted “Freedom, freedom” and “Everyone wants to film the police.” Some also held signs that read: “We’ll put down our phones when you put down your weapons.”

Supporters of the law say police officers and their families need protection from harassment, both online and in-person when off duty. Opponents say the law would infringe journalists’ freedom to report, and make it harder to hold police accountable for abuses such as excessive use of force.

Click here for an article on this subject in French)

‘A green light for the worst elements’

Edwy Plenel, chief editor of the investigative news website Mediapart, said the proposed legislation was a “green light for the worst elements in the police.”

“Those in power are increasingly trying to prevent citizens, journalists and whistleblowers from revealing the failures of the state. When this happens, democracy fades away,” said Plenel.

“We are not here to defend a privilege of our profession, press freedom and journalists’ freedom. We are here to defend fundamental rights, the rights of all people,” he added.

The Office of the UN High commissioner for Human Rights, and France’s human rights ombudsman, have also voiced concerns that the draft law could undermine fundamental rights.

In response to widespread criticism, Prime Minister Jean Castex said on Thursday that the measure would be amended to specify that it “won’t impede the freedom of information” and that it will focus only on images broadcast with “clear” intent to harm a police officer.

However, critics say the amendment does not go far enough. Emmanuel Poupard, secretary-general of the National Journalists Union (SNJ), said that he thinks the new amendment still “doesn’t change anything.”

The law “has only one goal: to boost the sense of impunity of law enforcement officers and make invisible police brutality,” said Poupard.

Lawmakers are scheduled to vote on the bill on Tuesday.

In July, three French police officers were charged with manslaughter over the death of a delivery man, Cedric Chouviat, that bystanders caught on video. Chouviat’s death had similarities with the killing of George Floyd in the United States, which sparked mass protests around the world, including in France.