An article from My Africa Infos (translation by CPNN)

It is with tears of joy that the famous Cameroonian actress Bana Blanche, expressed her gratitude to all of Africa during her presentation of the trophy which recognizes her as the best actress in Central Africa. 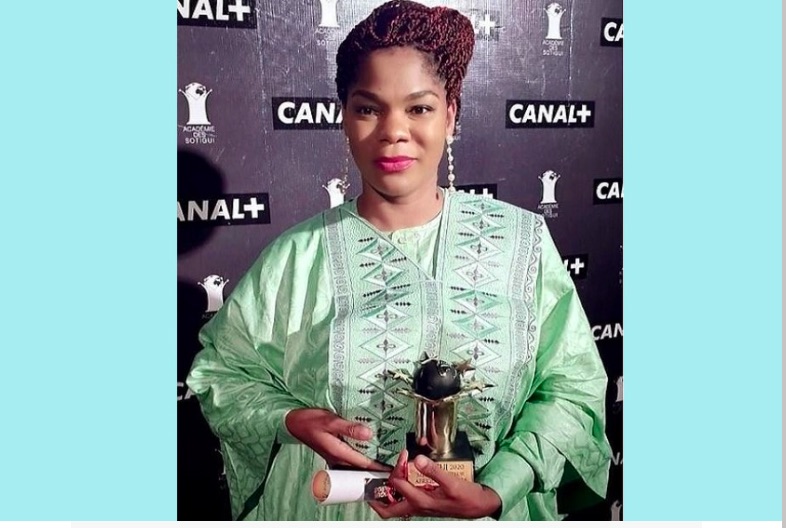 SOTIGUI Awards, the event which rewards artists of the 7th art over the past four years has placed particular emphasis on women at its 5th edition. Selected under the theme: culture of peace: what are the contributions from women in the cinema and audiovisual industry. Sotigui Awards once again honored African cinema and rewarded several artists in Burkina Faso on November 14th.

The thousands of difficulties linked to the COVID 19 pandemic did not prevent the organizers from bringing together the big actors of cinema in Africa and honoring the best. This 5th Edition of the Sotigui Awards rolled out the red carpet to Blanche Bana, a Cameroonian actress who has been the pride of the cinema of her native land for some time now.

In fact, Blanche Bana made a majestic entry into the world of cinematography in 2012. Since that date, the young girl has not ceased to shine in the spotlight and to attract the attention of the Cameroonian public with admiration. Following the crazy success of its beginnings: THE PACKAGE 1 and 2 (a film directed by Parfait Zambo), Blanche Bana was especially popularized by the communication giants, like MyAfricaInfos which did not hesitate to grant her an interview.

Very quickly Bana blanche rose through the ranks by directing short and feature films, series, and was solicited for advertising spots. Shortly after, the courage and determination of this young actress led her to international stages. Recognized as a gold bar of Cameroonian cinema, Blanche Bana won the prize for best actress of Cameroon in 2015 at the prestigious Ecrans Noirs Festival. In 2017, the beautiful actress took her first flight to Morocco and was counted among the guests of honor at several festivals, including the Agadir migration festival.