I have been an earnest proponent of the “Spiritual-Politics” movement ever since attending a workshop in 1995 with the inspiring authors of their transformational book Spiritual-Politics: Changing the World from the Inside Out.” By Corrine McLaughlin and Gordon Davidson, that book continues to influence my life even to this day. 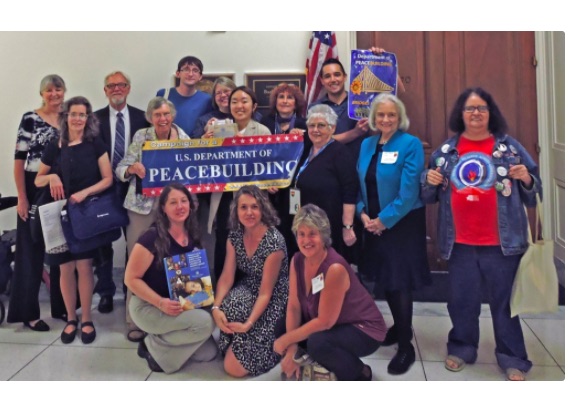 Photo from The Peace Alliance. Anne Creter is second from right in second row.

Most particularly during the 2000 Bush-Gore presidential election when they convened a unique “Spiritual-Politics” conference in Washington DC featuring renowned spiritual leaders together with popular politicians, I felt called to be there! Among the exciting speakers was Marianne Williamson (see CPNN Sept 8, 2019). And unknown Rep Dennis Kucinich who talked of a draft bill he was planning to introduce in Congress to create a Department of Peace (See CPNN August 2, 2004.

Instantly upon reading that draft he handed out I was captivated because it spoke to my Quakerism. I had become a “convinced” Quaker after the Viet Nam war because of its Peace Testimony, which emphasizes putting one’s faith into practice. Plus, as a social worker by profession I ascribe to the Social Work Code of Ethics in which working for peace is clearly stated. I knew then my calling was to do what I could to promote that bill. Advocating for it at the Peace Alliance with the compelling Dot Maver became the perfect spiritual-political way for me to put my faith into practice. Plus, as a social worker it was my ethical responsibility to do so. And I’ve been trying to do that work ever since.

I cannot believe 20 years later I’m here at a Peace Alliance program about it with Marianne Williamson, Dennis Kucinich and Dot Maver. We have come full circle in affirming the basic value of peace and government’s basic duty to foster it, per Article 5 of the norm-setting UN Programme of Action on the Culture of Peace which states that “governments have an essential role in promoting & strengthening a culture of peace.” Especially now, grappling with the greatest planetary challenges we have ever faced.

When I first heard the idea of a Peace Department at that conference it struck me as a brilliant pipe dream never before contemplated. Thus, I was surprised to learn the depth of its actual history. For it goes back to before the founding of our country to the Native American Iroquois Great League of Peace Confederacy in the northeast territory which functioned like a Department of Peace. And throughout our history it has been seriously considered many times both in Congress and civil society. For example:

Is a U.S. Department of Peace a realistic political goal?

In 1793 Dr Benjamin Rush, signer of the Declaration of Independence advocated for an Office of Peace when the constitution was being drafted – saying it was needed to balance their newly created Office of War. He believed not having a Peace Office was a fundamental flaw of our constitution, which we still suffer the consequences of today.

In 1925 Carrie Chapman Catt, founder of the League of Women Voters at a “Cause and Cure for War” Conference first publicly suggested a cabinet-level Department and Secretary of Peace be established.

In 1927 Kirby Page published a Christian pamphlet entitled “A National Peace Department Proposal for Study” articulating the same issues we grapple with today.

In 1935, Senator Matthew Neely introduced the first official legislation. Since then bills proposing a Department of Peace has been introduced many times in Congress.

In 1936, the Biosophical Institute published a piece on “The Need for a Secretary of Peace” stating “All lovers of peace and workers for human welfare are urged to cooperate in the Secretary of Peace Movement by organizing clubs in their localities.”

In 1937 The ROTARIAN magazine devoted a whole issue to the pros and cons of a “department of peace” – not much different from today’s pros and cons.

In 1947 the House Committee on Expenditures in the Executive Departments held hearings on a bill to create a Department of Peace.

In 1953 Congresswoman Ruth Thompson proposed a Department of Peace saying “All the guns, tanks and bombs we are building during this hectic time are not going to save us from our enemies at home or abroad.” Sadly, her political career ended abruptly following a contentious fight over development of a jet fighter base in her district.

In 1969 Frederick Schuman, a Woodrow Wilson Professor of Government, published a persuasive scholarly booklet entitled “Why a Department of Peace?”

Also, in 1969 the most significant Peace Act to establish a cabinet-level new department was introduced by Senator Vance Hartke to “develop plans, policies and programs designed to foster peace and coordinate all US government activities affecting the promotion of peace.” It got much bi-partisan support because of the Viet Nam War.

July 11, 2001 (two months before 911) Rep Kucinich introduced the first iteration of the bill in recent times. It has been revised and reintroduced in each congressional session since then. Rep Barbara Lee became its sponsor when Rep Kucinich left Congress. Bernie Sanders was one of the few original cosponsors of that bill, which is what motivated me to become a Bernie delegate at the 2016 Democratic Convention.

I believe this remarkable history shows that the concept of a Peace Department has seasoned and matured over time, thus is ready now for activation. Our current all-systems breakdown is crying out for new common sense, evidence-based all-systems responses to transform from our culture of violence to the culture of peace. Let us correct our Founding Father’s fundamental flaw in the constitution by finally balancing the Department of Defense with a Department of Peacebuilding. It is long overdue time now to awaken to the necessity of establishing a Department of Peacebuilding to bring lasting sustainable peace to our NEW NORMAL POST COVID WORLD.