The meeting reviewed the status of the partnership between the United Nations (UN) and the African Union (AU) with an update on the implementation of the Joint UN-AU Framework for Enhanced Partnership in Peace and Security. The meeting discussed developments and cooperation in support to on-going electoral processes in Côte d’Ivoire, Ghana and Guinea. The meeting also exchanged views on the situations in Ethiopia, Libya, Mali, Somalia, South Sudan, Sudan and Western Sahara. 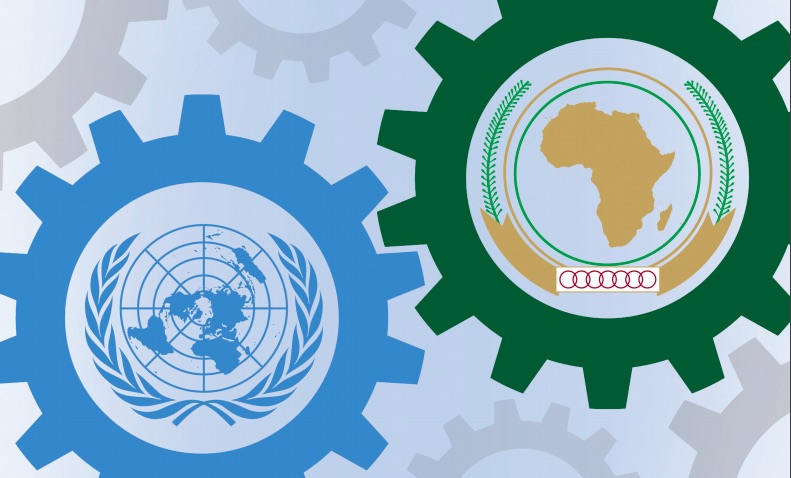 The Joint Task Force took note of the considerable progress achieved in the UN-AU partnership including with regional economic communities and mechanisms in Africa together with international partners. These include sustained collaboration on support to African Union peace support operations, early warning and prevention initiatives, as well as coordinated support to national authorities for the conduct of timely, peaceful and inclusive elections as well as for the promotion and protection of human rights. Both organizations strengthened collaboration in mediation support and have begun to focus more on their joint initiatives on the women, peace and security, and youth for peace and security agendas.

The Joint Task Force took note of the impact of the COVID-19 pandemic on peace and security in Africa and welcomed the swift actions taken by the continent’s leadership to contain the spread of the pandemic. They further welcomed the collaboration between both organizations, Regional Economic Commissions and Member States in responding to the peace, security and humanitarian impact of the pandemic.    The Joint Task Force exchanged views on the socio-political situations in Côte d’Ivoire, Ghana and Guinea, ahead of the elections scheduled in October and December in those countries. The meeting agreed to foster complementarity in electoral support to Member States and undertake joint conflict prevention initiatives aimed at mitigating election related crisis. The Joint Task Force further agreed to work together in supporting Member States efforts in strengthening their electoral institutions and processes and in enhancing their capacities to organize peaceful, credible, transparent and inclusive elections which among others provide for the participation of women, youth, persons with disabilities and other marginalized groups.

The Joint Task Force expressed concern about the tense environment ahead of the presidential election in Côte d’Ivoire. They urged all stakeholders to refrain from incendiary speech and violence, and to engage in dialogue to resolve their differences and create an environment conducive to a peaceful, inclusive and credible election. They further encouraged the authorities, including the security forces to protect and uphold human rights in the electoral process. The Joint Task Force reassured the people of Côte d’Ivoire of the continued solidarity and support of the African Union and the United Nations.

The Joint Task Force called on the relevant Ghanaian stakeholders to ensure the holding of peaceful, transparent, inclusive and credible elections. It further encouraged the competing parties to call on their supporters to adhere to the agreed code of conduct, to refrain from the use of hate or inflammatory speech and any acts of violence before, during, and after the general elections. The Joint Task Force further encouraged all parties to resolve any differences that may arise in connection with the elections through dialogue and in strict respect for the rule of law. The Joint Task Force remains confident that Ghana will, as in the past, continue democratic consolidation by delivering peaceful and credible elections.

The Joint Task Force called on Guinean stakeholders to ensure the holding of peaceful and credible elections. They condemned the frequent recourse to hate speech and the manipulation of ethnicity for political purposes. They urged all actors to act with responsibility, refrain from violence and resolve through dialogue and legal means any disagreements that may arise in connection with the election. They further urged the defence and security forces to exercise utmost restraint and uphold international human rights standards in their conduct during the electoral process. The Joint Task Force reiterated the commitment of the African Union and the United Nations to continue supporting the people of Guinea in the consolidation of democratic gains.

Further, the Joint Task Force exchanged views on the situation in Libya and welcomed the conclusion of the Ministerial Meeting on Libya co-chaired by the Secretary-General of the United Nations and the Foreign Minister of Germany, Mr. Heiko Maas, on 5 October 2020. They agreed that UN, AU, EU and LAS should continue to work towards enhanced cohesion through the Libya Quartet.

On the situation in Mali and the Sahel, the Joint Task Force took note of the start of the political Transition in Mali following the establishment of an inclusive transitional government headed by a civilian Prime Minister and a civilian President. The Joint Task Force welcomed the lifting of sanctions and reiterated the African Union and United Nations’ full support to the Transition authorities and people of Mali towards peace, stability and restoration of constitutional order. It committed to deepen the AU-UN collaboration to assist the transitional authorities in the preparation of elections and launch of priority reforms, within the 18-month transition period.

The Joint Task Force urged the parties to uphold their commitment under the Agreement and prioritize the key institutional reforms of the peace process. It welcomed the participation of the signatory armed groups in the Transition Government and called on all stakeholders to work in a spirit of compromise to accelerate the implementation of the Peace Agreement. The Joint Task Force urged for enhanced participation of women in the peace process. It recognized the important role MINUSMA and MISAHEL continue to play in support of the Malian parties to advance the implementation of the Peace Agreement and to address the situation in central Mali.

The Joint Task Force expressed concern over the alarming deterioration of the situation in Mali and the Sahel region, and reaffirmed the determination of both Organizations to continue supporting national, regional and international initiatives. The United Nations reiterated its commitment to support the African Union in the strengthening of its engagement in the Sahel, including through the deployment of 3,000 troops in support to the G5 Joint Force. The Joint Task Force also called on international partners to scale up their support, and provide the resources and assistance required by the G5 Sahel Joint Force to fully play its critical role in fighting terrorism and transnational organized crime.

With regards to Ethiopia, the Joint Task Force noted the UN and AU’s support to the country’s ongoing reforms, including to domestic initiatives aimed at facilitating a consensus on key political, social and economic issues. The meeting commended the efforts of the AU to facilitate a mutually beneficial trilateral agreement on the Grand Ethiopian Renaissance Dam.

On South Sudan, the Joint Task Force called to resolve pending issues particularly agreement on Transitional Security Arrangements (TSAs) and formation of the Transitional National Legislative Assembly (TNLA). The meeting further committed to support the participation of women in the implementation of the Revitalized Agreement for Resolution of Conflict in South Sudan (R-ARCSS), and encouraged  the appointment of the head of the Joint Monitoring and Evaluation Commission (JMEC).On Sudan, the Joint Task Force highlighted the continuing critical strategic and political partnership between the United Nations and the African Union and noted that the two organisations will continue to be close partners throughout Sudan’s transitional process. The meeting commended the engagement of the African Union in the planning process for UNITAMS, which will maximise the two organisations’ comparative advantages in support of the transition. The Joint Task Force welcomed the peace agreement signed in Juba on 3 October between the Sudan Revolutionary Front, the Sudan Liberation Army-Minni Minnawi faction and the Government of Sudan and urged the non-signatories to the agreement to fully engage in the peace process.

On Somalia, the Joint Task Force welcomed the resumption of political dialogue among the leaders of the Federal Government and the Federal Member States that led to the agreement on a model for elections, albeit indirect parliamentary elections for 2020/21, and stressed the importance of concerted efforts to work towards universal parliamentary elections in 2024/25. The meeting expressed hope that the upcoming electoral process would be timely, free, fair and inclusive of all sectors of Somali society including women, youth and minority groups, and guarantee at least a 30 per cent representation of women in Parliament. Recognizing that 2021 will be a transition year in Somalia toward a new political dispensation as well as towards Somalis taking the leading role on security, the Joint Task Force underscored the criticality for the dialogue among Somalia’s leaders to continue and extend to other priority areas including the constitutional review, building a federal Somali security sector and other institutions, and resolving outstanding differences between the Federal Government and Federal Member States.

The Joint Task Force recognized AMISOM’s continued critical contribution to peace and security in Somalia and welcomed its efforts to collaborate with Somali Security Forces to consolidate and extend security gains, notwithstanding challenges posed by the COVID-19 pandemic The meeting took note of efforts underway to chart the way forward on the transition to Somali security responsibility, notably the Federal Government’s work to update the Transition Plan. With regards to the independent assessment, the AU highlighted that its views should be taken into account. The meeting called for continued efforts to strengthen a common approach among Somalia’s partners towards support to peacebuilding and state-building in the country.

With regard to Western Sahara, the Joint Task Force looks forward to the appointment of a new Personal Envoy of the Secretary-General for Western Sahara and encourages the parties to refrain from rhetoric and actions that are harmful to a political solution to the conflict. The Joint Task Force discussed the resource shortfall for the humanitarian assistance for the Sahrawi refugees particularly during the COVID-19 pandemic.

The Joint Task Force also discussed UN-AU cooperation in counterterrorism. While commending ongoing cooperation in counterterrorism, participants underlined the need for greater coordination and consultation to ensure synergies, build on each other’s efforts and avoid duplication. The meeting agreed therefore to work towards the establishment of a joint coordination mechanism that will be responsible for providing oversight and strategic level guidance to the joint working groups to be subsequently established.

The next statutory meeting of the Joint Task Force will be hosted by the African Union Commission in February 2021, on the margins of the 34th Ordinary Session of the Assembly of Heads of State and Government of the African Union.