As part of these activities relating to the Covid19 pandemic, the National Coordination of the Pan-African Youth Network for the Culture of Peace (PAYNCoP Gabon) launched, on Tuesday September 15, 2020, the support project for people living with a handicap. 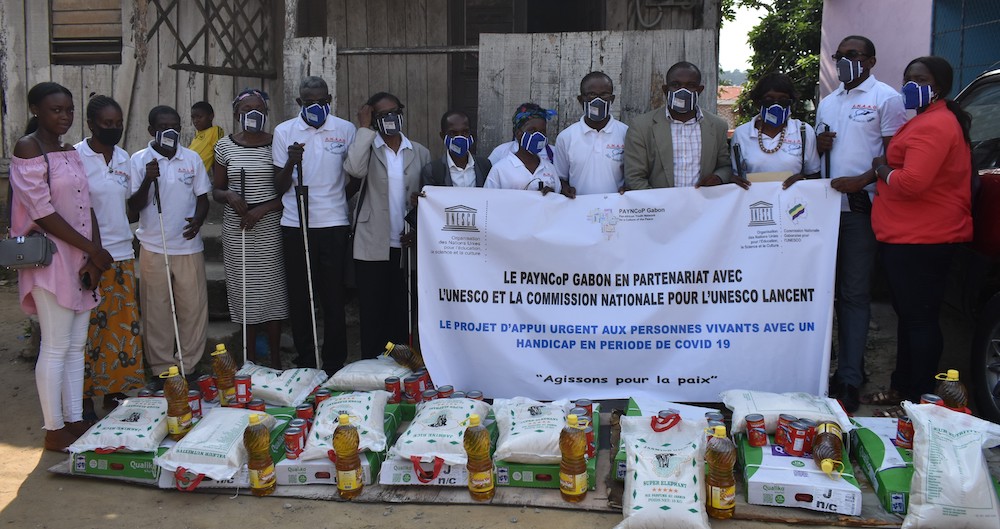 The initiative, which benefits from the support of UNESCO and the National Commission for UNESCO, supports the actions of public authorities. The project consists of three components, in particular an awareness campaign on barrier gestures, the distribution of bibs and hydroalcoholic gels and the provision of food.

According to Jerry Bibang, the National Coordinator of PAYNCoP Gabon, “the project involves four associations including the Organization of Handicapped People (OPH), the National Association of the Blind and Visually Impaired of Gabon (ANAAG), the Association of the Deaf (ANDES ) and the NGO Bagniamessebe. It will impact a total of 50 Gabonese families, or around 200 people.”

For the National Commission for UNESCO, “this project helps implement the resilience strategies advocated by the Gabonese Government and UNESCO, in this period of global health crisis, marked by the Covid19 pandemic.” This was explained by Philippe MEMENE M’EYI, its Deputy Secretary General.

The urgent support project for people living with a disability follows on from other actions carried out by PAYNCoP Gabon since the onset of the pandemia. These include, among others, the awareness campaign on social networks, in partnership with the National Youth Council; participation in the awareness-raising video on fakes news around Covid19, produced by UNESCO; the establishment of hand washing points in the neighborhoods of Libreville, in partnership with the NGO Engineers Without Borders and the New World Citizen Laboratory; and the production of two comics, dedicated to raising awareness among young people about Covid19.