An article by Hicham Alaoui in MSN (translation by CPNN)

The e-Caravan of Peace, a flagship event of the “Month of Amnesty in Africa 2020”, was launched on Tuesday from Rabat, capital of Morocco, to travel [virtually] through all African countries, with the objectives of promoting values ​​of peace, tolerance, solidarity and pan-African integration. 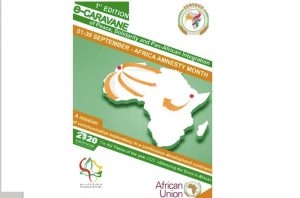 Initiated by the Moroccan Association Key to Peace for Development and Solidarity, the Economic, Social and Cultural Council of the African Union (ECOSOCC-UA) and the Moroccan national chapter of ECOSOCC-UA, this virtual caravan is part of the AU theme for this year namely “Silencing the Guns: Creating the Conditions for Africa’s Development”.

The silence of the guns on the continent, a wish of the populations of the African hemisphere, is a long process which requires a very strong commitment to implement the policies, frameworks of action and instruments of the African Union.

Indeed, the proliferation of small arms and light weapons is clearly linked to the violent conflicts that continue to undermine peace and development in Africa. This situation leaves the continent very vulnerable, these weapons causing enormous destruction and claiming many victims.

In Africa, the dynamics of conflicts and current trends in arms trafficking are changing due to the evolving nature and diversity of actors, such as pirates, terrorists and criminal organizations. This means that the existing challenges persist while becoming more complex.

The AU’s 2063 vision calls for a solid partnership to establish synergies and effective coordination between the various initiatives in order to reduce armed conflicts in Africa. It is to raise awareness of the importance of this theme of the year of the AU, that the e-Caravan of Peace, as an initiative of civil society, has mobilized to promote the culture of peace, solidarity and living together, to build a continent free of conflicts where the conditions for a decent life are guaranteed.

It is nonetheless true that in the face of the current dynamics of conflicts and new trends in the arms trade, a strong partnership with civil society is highly crucial. At this critical juncture, it is important to highlight the role it can play in ending conflicts, promoting peace and raising awareness in local communities.

* fight against the illicit arms trade, destabilization and misuse of small arms and light weapons in Africa,

* and establish a solid partnership between governments and ECOSOCC on issues related to peace and security in Africa.

According to the vice-president of ECOSOCC for the North African region, Khalid Boudali, the e-Caravan of peace is a solidarity event aimed at “rallying all stakeholders to participate in humanitarian action for help establish peace and security on the continent and free Africa from the yoke of armed conflict ”. For him, the e-Caravan constitutes a milestone in the efforts made for an Africa without conflicts or wars.

It is also designed to support the ongoing efforts of the various actors and at the same time take stock of the progress made so far with the objective of strengthening peace and security in Africa, said Mr. Boudali, who presides over the destinies of the Key International Association for Peace for Development and Solidarity. “The social, economic and political factors that motivate groups and communities to acquire these weapons must be addressed. It is undeniable that efforts to disarm communities must take into account security and development concerns and offer them alternatives to crime and other illicit activities,” he said.

As a conflict prevention tool, the African Peace and Security Architecture, and all its supporting instruments, appear to be very effective. However, it is important that the African Union continues its efforts to ensure that the implementation of Program 2063, launched to build a prosperous continent endowed with good governance, respecting human rights and encouraging popular participation. and development, remains at the center of its efforts.

It should be noted that the e-Caravan will take place on a virtual platform in all Member States of the African Union during the month of September. Awareness-raising actions and debates will be initiated every week at the national level, in cooperation with the national platform of civil society organizations with a series of webinars to present the results and recommendations made in each of the five regions of the continent.

The culmination of the e-Caravan will be the holding, on September 30, 2020, of an e-symposium on public policies, an event during which the overall report of the activities and the recommendations adopted during the various activities carried out at all levels, national and regional, will be presented.

The initiative to hold the Caravan as a virtual event was dictated by the current situation marked by the spread of the Covid-19 pandemic and the resulting consequences, in particular the closure of air, land and sea borders.

In fact, a Caravan of peace, solidarity and pan-African integration, which the Moroccan Key Association for Peace for Development and Solidarity intended to organize, and was going to travel through 12 African countries, was about to be organized. But with the arrival of the coronavirus, it was changed from a real-world event to a virtual event. Thus, the overland journey of this Caravan has turned into an e-journey.