A great meeting between the Mediator of the Republic and the National Chamber of Kings and Traditional Chiefs of Côte d’Ivoire was held at the Félix Houphouët Boigny Foundation for the search for peace in Yamoussoukro, hosted this Saturday, August 29, as noted on the spot by KOACI,. 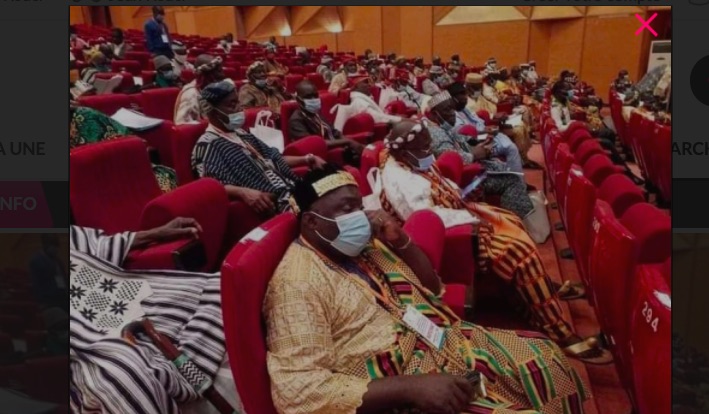 Traditional leaders at the Foundation in Yamoussoukro (photo by KOACI)

This meeting which saw the effective participation of the President of the National Chamber of Kings and Traditional Chiefs, His Majesty Amon Désiré Tanoe, of the Minister of State, Minister to the President of the Republic, in charge of Relations with Institutions, Gilbert Kafana Koné, was placed under the theme “the mechanisms for establishing a lasting peace in Côte d’Ivoire.”

The Mediator of the Republic, Adama Toungara, said that the kings and traditional leaders of the country on mission are at the heart of the culture of peace, pledge of lasting stability and harmonious development of Côte d’Ivoire. “I remain convinced that it is with the involvement of all, members of the government, traditional leaders, political leaders, religious guides and civil society, that we will succeed in forging and sustainably maintaining the image of fraternity, solidarity, union and peace.” said the mediator.

About 200 chiefs, from 108 departments of Côte d’Ivoire, took part in the meeting in Yamoussoukro this Saturday. The Mediator of the Republic and the President of the National Chamber of Kings and Traditional Chiefs, called on the traditional chiefs, guarantors of customs and traditions, to be messengers of Peace and social cohesion in their different villages, cantons and kingdoms in this election year. To conclude, they invited the political actors in the right tone and to avoid any action likely to undermine the peace and the unity of the Nation.