An article from Le Faso

The Movement for the Culture of Peace and Love of the Fatherland (MPAP) held its second ordinary congress on August 29 and 30, 2020 in Bobo-Dioulasso. This meeting brought together the officers from 13 regions and the focal points of the 45 provinces of Burkina Faso under the theme: “Election year in Burkina Faso: what contribution for a free and transparent election, pledge of peace and social cohesion?”. The ceremony which took place on Saturday, August 29, 2020, was sponsored by the chef de canton des bobos mandarès. 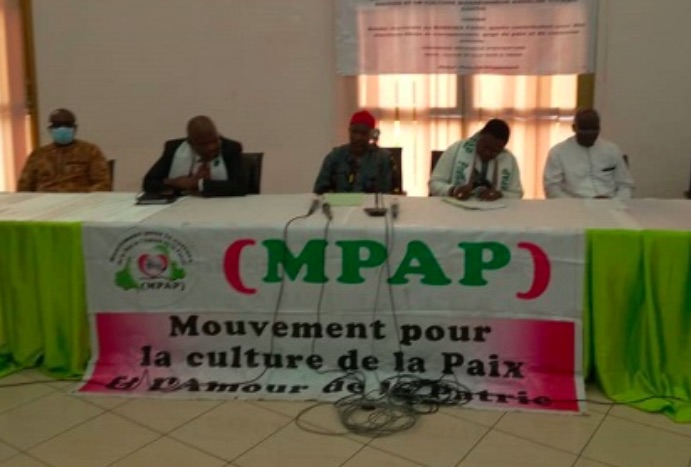 The elections of November 22, 2020 crystallize debates both nationally and sub-regionally. They constitute a major stake for the consolidation of democracy and social cohesion.

According to the president of the Movement for the Culture of Peace and the Love of the Fatherland (MPAP), Samuel Kalkoumdo, these elections are being held in extremely difficult conditions, in that there are more than a million displaced people under conditions of insecurity that persist and make localities inaccessible. “In this condition, how can we succeed to hold free, transparent and universally accepted elections and avoid a social divide?” he asked.

It is in this context that the MPAP is committed to the quest for social cohesion, peace and living together through its congress held in the city of Sya. For the president of the MPAP, this is what motivated the choice of the topic of reflection which will allow the delegates to return home, seasoned and enlightened, to be real vectors of peace in their respective localities.

“The choice of this theme is imperative. In such a context, the country must be united. We must advocate social cohesion in order to be able to hope to build a bright future. All 45 provinces are represented at this congress. And during the two days of work, the delegates will be trained and steeped in experience,” he said.

Participants will take part in several communications, including one on the electoral process. “We are convinced that if people understand how the process is going, they will be less inclined to say without evidence that there has been fraud. The participants will be trained as association leaders, in order to be able to send a message of peace to the population,” explains the president of the MPAP. The Burkinabè shoujld cultivate peace by working for free and transparent elections accepted by all.