Announcement of webinar from The United National AntiWar Coalition

The past months of the Black Lives Matter Movement have confirmed once again the only way to challenge this racist, militarized system is with the explosive power of people making demands and shutting it down.

Regardless of what happens in November our only way forward is to stay mobilized! The people must lead from below through organized, strategic protest. 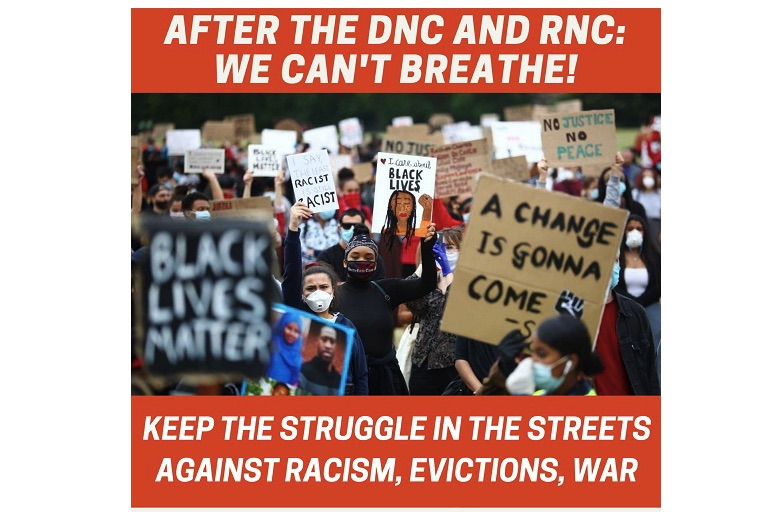 • For economic justice in response to the economic collapse.

– For a public health response to the pandemic with Medicare for all.

• In defense of migrants rounded up and deported!

• In solidarity with LGBTQ+ and disabled people

• Against endless wars, sanctions and occupations

We face the greatest capitalist crash in US history and an out of control COVID-19 pandemic. At every level of government from the president to Congress down to mayors and local officials, the response to the pandemic and economic collapse shows a failed state.

The people must remain mobilized through the election and beyond. We will not win the change we need at the ballot box. The two candidates of the parties of the billionaires ignore the super-majority of people in the US who support improved Medicare for all, a robust Green New Deal, an end to inequality and taxation of the wealthy, an end to the never-ending wars and US imperialism. Neither party is responding to the call to stop racist militarized policing, invest in alternatives to policing while cutting police budget and democratic community control of the police. No matter who is elected the people must be mobilized in 2021 to make the country ungovernable until the people’s demands are met.

• Resistance and uprisings against racism and police violence

• Organizing for rent strikes and against evictions

• Solidarity with all those resisting US imperialist violence

Please make a much needed contribution at: hppts://UNACpreace.org/donate.html