Every year, Campaign Nonviolence organizes a national week of action across the United States and around the world, built around the third week of September, near Sept. 21st, International Peace Day. For the last six years, we have organized an unprecedented national grassroots movements with actions in every state where people connect the dots between the issues of injustice and violence, including war, poverty, racism and environmental destruction, and hold public events, actions and marches demanding immediate positive social change. 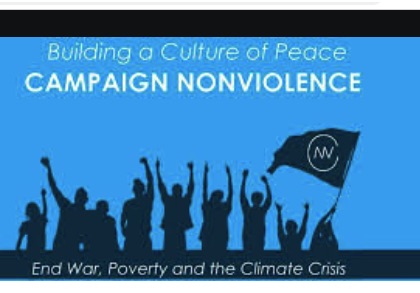 In September, 2019, the Campaign Nonviolence National Week of Action held over 3,300 actions, events and marches across the USA and in 20 countries. This was an historic unprecedented new form of organizing in the US, and we invite you to help us build up this national week of action.

The only way positive social change has happened in the US is from bottom up, people power, grassroots movements of nonviolence, so we invite everyone to join this Campaign Nonviolence National Week of Action Sept. 19-27, 2020, as an organizing tool, to help get the movement moving, to invite people of all walks of life to take to the streets against violence and injustice, and to carry on Dr. King’s vision of what we could become—a new culture of nonviolence. Join the growing Campaign Nonviolence national week of action movement by signing up for an action, or join with others planning an event.

SEE THE FULL LIST OF PLANNED ACTIONS THIS SEPTEMBER

* Host or attend a Nonviolence Training in preparation for your action

* Find tools and resources for Action Week. Get the CNV action toolkit, flyers, graphics, action ideas and more! See below.

* Read the 10 Tips for Great Actions and read about some great actions ideas.

* Join action organizers around the country as we come together for the next Campaign Nonviolence National Conference ONLINE to mark the 75th anniversary or Hiroshima and Nagasaki featuring Richard Rohr, Erica Chennoweth and more!