Hundreds of thousands of protesters gathered in Belarus on Sunday [August 16] for an eighth straight day of anti-government demonstrations a week after Alexander Lukashenko, who’s ruled the country since 1994, claimed victory in an election widely viewed as fraudulent. 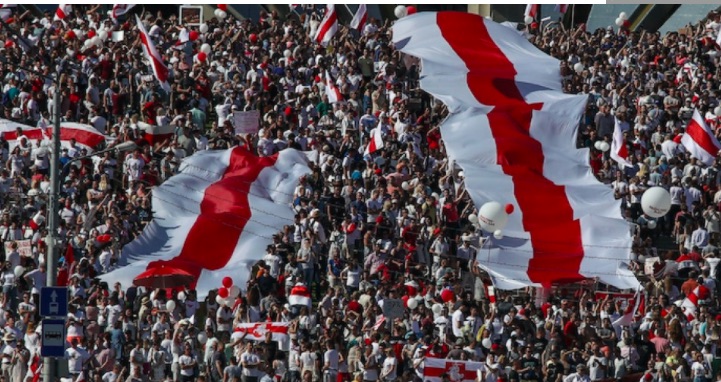 A pro-government rally also took place in the capital, though that crowd’s estimated size of roughly 10,000  was a fraction of the roughly 200,000 that came out for the opposition action.

From Politico:
In a rambling speech to his backers, Lukashenko gave no indication he was prepared to give way. He insisted that the August 9 election—widely considered a fraudulent vote that gave him an 80 percent victory—won’t be held again.

During 26 years in office, Lukashenko has repressed opposition figures and independent news media. But this year, protesters fed up with the country’s declining living standards and Lukashenko’s dismissal of the coronavirus pandemic have posed the biggest challenge to his rule.

Amnesty International warned  last week that Belarusian authorities were carrying out a campaign of torture and mistreatment against the anti-government demonstrators.

“For days the world has watched in horror as police in Belarus fire rubber bullets and tear gas, into crowds of peaceful protesters. It is now becoming increasingly clear that the bloody scenes on the streets of Belarus are just the tip of the iceberg,” Marie Struthers, Amnesty International’s director for Eastern Europe and Central Asia, said in a statement Thursday.

“Former detainees told us that detention centers have become torture chambers, where protesters are forced to lie in the dirt while police kick and beat them with truncheons. They described being stripped naked and subjected to sadistic beatings while listening to the screams of other victims,” said Struthers. “These are people whose only ‘crime’ was to take to the streets in peaceful protest.”

“What we are seeing in Belarus is a human rights catastrophe that demands urgent action,” she said.