An article from El Litoral

The Ombudsman of Santa Fe, Raúl Lamberto, was the first speaker on Friday, July 3, the last day of the 2nd Latin American Congress of Restorative Justice, which took place on June 30 and July 1, 2 and 3, organized by the santafesina institution along with the General Defender of Lomas de Zamora, the Superior Council of the Judiciary of Colombia and the Ombudsman of Colombia. 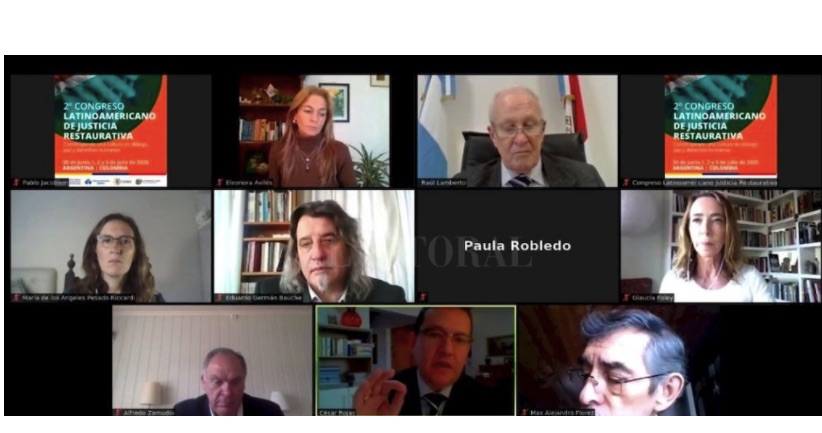 On the occasion, Lamberto highlighted the scope of geographical representation and the large participation of listeners. “We have received innumerable messages from all over the world with their adherence, collaboration and encouragement towards this journey. They are very heartfelt messages for us because very important institutions of the world are accompanying us”, he pointed out and reflected:“ We have been the vehicle of something that society is demanding, in face of the emerging insufficiency of the penalty of criminal justice as a tool. It is clear that punitive power is not enough and with restorative justice we are on a path that is necessary. ”

After the greetings, the General Defender of Lomas de Zamora,Eduardo Germán Bauche, took the floor and thanked all the participants and said: “Talk about restorative justice without thinking about the contribution that restorative practices make to the culture of peace. it is like leaving the issue unfinished and that is why it seemed important to us to close this Congress with the panel of restorative approaches”. After that, the panel of speakers began.

The speaker in charge of formally opening the last panel of Congress was the expert from the Conflict Prevention and Democratic Dialogue Roster for Latin America of the United Nations Development Program (UNDP), Cesar Rojas, who expressed: “We are living a unique situation , difficult, which we could call as a situation of insomnia in which many of us keep our eyes open, worried that there are many who have lost their lives and others continue to become infected and this, undoubtedly, distresses us in a special way, but also this insomniac situation keeps our eyes open to look at a set of unpublished, particularly significant structural developments.

In this sense, he elaborated: “Never before have we been so open to a conjunction of events, thanks to networks and connections. We have a kind of periscope receiving invaluable knowledge and information from different voices and from different parts of the world.”

Rojas also referred to forgiveness and pointed out that this “search is to generate a deep human alchemy in human beings, so that they can conjure up the pain that they carry within”, and he concluded: “It is expected that restorative justice can recover the interiority of those who are suffering, weighed down by pain, so they can once again recover, replace, repair and empower life. ”

Subsequently, and continuing with the panel of speakers, Glaucía Foley, who is coordinator of the Community Justice Program of the Court of Justice of the Federal District of Brazil, spoke, saying: “The culture of peace presupposes profound changes in two spheres , in the sphere of justice where it is necessary to guarantee rights, and in the political sphere where it is also necessary to transform the pattern of power domination”. Likewise, he considered that “restorative practices cannot be limited to an instrument of humanization of criminal justice, but must be combined with a transformative perspective of conflict and not only of the transformation of personal relationships between the people involved”, and proposed the use of the methodology of community circles “that allow a collective analysis of the circumstances in which conflicts arise, including those where structural violence is found and also its possible ways of overcoming them”.

In turn, the reference of the Colombian Ombudsman, Paula Robledo, reflected: “The scenario of the pandemic has allowed us to take advantage of the production of new knowledge from a respectful dialogue, where listening and reflections on restorative practices enrich a network of professionals, academics and public officials, committed to challenging indifference through training oriented to democratic values. ”

Finally, and closing the panels of exhibitors of the Congress, the Director of the Nansen Center for Peace and Dialogue (Norway), Alfredo Zamudio, spoke, who pointed out that “through experience we have been learning how the reunions when societies are broken by conflict”, and he elaborated:“ We speak of reunions and not of reconciliation in a process that begins when the parties understand that the broken history can be reconstructed and this happens when there is a real listening to the other”. He concluded: “In this way the dialogue that builds trust and repairs the damage is produced ”.

At the end of his speech, he recalled an experience he had in Africa in which some sheikhs participated and, in order to avoid indiscriminate felling of trees, he placed in the center of the meeting the trunk of an old tree that he had found and asked if they could count all the rings on the trunk. When they reached 150 rings, he explained that these were the years of the tree’s life and that this specimen had surely given shade to their grandparents. “Through this emotional experience we managed to start a process of awareness,” he recalled.

After that, the conclusions of the Congress took place, which was in charge of the Coordinator of Relations with Citizens of the Ombudsman, Eleonora Avilés and the representative of the General Defender of Lomas de Zamora and the Public Ministry of the Province of Buenos Aires, María de los Ángeles Pesado Riccardi.

Previously, on Friday morning, with the coordination of Mariana Apalategui, responsible for the area of ​​Mediation, Alternative Resolution of Criminal Conflicts and Restorative Justice of the jurisdiction of Juvenile Criminal Responsibility of Lomas de Zamora, the last panel of Sharing Views and Experiences took place, under the slogan “Public policies and restorative practices in juvenile criminal justice”.

The first to speak was Martiniano Terragni, from the Attorney General’s Office for Criminal Policy, Human Rights and Community Services in the Argentine Public Prosecutor’s Office. “I want to celebrate the organization’s effort to achieve a culture of peace and work in justice processes that move away from traditional justice,” said the also university professor, who asked: “We must avoid the reductionism of juvenile justice in the last twenty years which involves focusing on from when to punish a child.” He also defined three complexities that restorative justice must address: gender perspective, multiculturalism and an interdisciplinary approach. “It is a challenge for the future to take into account the gender perspective, which is not present in traditional justice,” he added.

For her part, Celia María Oliveira Passos, from the Institute for Advanced Solutions in Brazil, referred to how to conceive restorative justice with a vision over time and for this she divided it into four waves: linear view, systemic view, holistic view and integrative vision. “Restorative justice invites reflection on the construction of relationships in the personal, institutional and social dimensions. There are three axes that help us act following the principles and values ​​of restorative justice, “added the member of the Permanent Forum on Restoration Mediation and Practices of the Court of Justice of Rio de Janeiro.

In turn, Marcela Kern, of the Juvenile Criminal Responsibility Ombudsman of the Public Ministry of the province of Buenos Aires, outlined: “Since 2016 we began to do, almost without realizing it, restorative justice with adolescents. Today I consider that this is not only an indispensable tool for reaching agreements, but also for an individual healing process for young people. ” And then she added: “We carry out our task teaching adolescents to develop emotional intelligence and we do it with the 10 life skills recommended by the World Health Organization. The most important thing with adolescents has to do with listening ”. To finish, she showed a video with activities, work modalities and their results.

Then it was the turn of Mariela Prada, defender of Juvenile Criminal Responsibility and professor at the National University of Lomas de Zamora, who referred to interdisciplinary network practices in the juvenile criminal responsibility system with a restorative approach. “For those who experience a destructive act, restorative practices are a before and after,” he evaluated. And then she explained: “When people say that there is no justice, it is because traditional justice is not giving the answers that men and women need. We cannot continue trying to respond with legal and mathematical notions to a social problem ”. In reference to interdisciplinarity, she pointed out that in her area they train municipalities and at the same time receive training from them, which demands that we include youth.

Later, Lácidez Hernández, from the Prison Confraternity of Colombia, took the floor and recounted the work carried out in prisons with those convicted of violent acts in that nation marked by armed conflict. “Confraternity is inspired by restorative justice. In Colombia it has been difficult to carry out a project of peace, dialogue and respect for human rights. The violence has been cyclical. It just changes face. And in this context, the initiative was born in 2004 to apply restorative justice in the country’s prisons. Prisons are a reflection of this violent context, “she said, later detailing how the institution implements the methodology:” We help find victims of violence with their perpetrators. Restorative justice helps break crime circles and build a culture of peace that improves our societies. ”

Finally, Mónica Contreras Cabrera, National Coordinator of the Mediation Unit of the Superintendency of Education of Chile, recounted her experience in the pilot project of juvenile criminal mediation in that country, which is being used as a contribution to the reform of the law on adolescent criminal responsibility . She also referred to the importance of communities in the restorative justice process. “The community perspective of restorative justice is not new. Our practices have to be linked with the broader communities and, in that sense, I propose to introduce the ritual elements of the communities,” she reflected, and concluded: “Restorative justice in Latin America and the community element are evolving and have to take a own and different path, taking into account a more social and political aspect. In Latin America there are many social injustices and restorative justice must be able to respond in this context. ”