The young people of Toamasina have taken their responsibility in the face of the unrest that threatens security.

Toamasina is one of the cities with the most insecurity, including burglaries and armed attacks. Many neighborhoods have suffered from these troubles, including Ambalakisoa, Verrerie, Tanambao V, etc. The inhabitants of the city of Tamatave thus live day and night in anxiety. 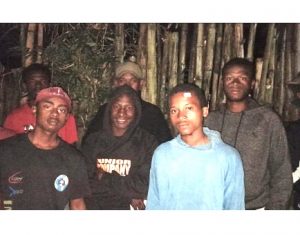 Young people of Ambalakisoa gathered during the curfew

The governor with the chief of the police and the gendarmerie then appealed to the chiefs of the Fonkontany (basic administrative subdivision in Madagascar) to confer on the establishment of a curfew or “andrimaso-pokonolona” in each district in order to ensure the peace. After that, the presidents of Fokontany brought together residents under their jurisdiction to discuss the feasibility of this curfew. It is really important to establish peace for the well-being of all and to have the assurance of sustainable development. There is a famous saying that says “There can be no sustainable development without peace and no peace without sustainable development”.

Young people are the most active participants in the curfews. It is clear that they are aware of the seriousness of the situations. This motivates them to get involved in restoring humanitarian security. This is a good thing for the nation, because the Malagasy population is overwhelmingly young, 62%. They are the lever of development of our country. As these young people have done let us now stop complaining and take action. Let us take our share of responsibility for our future so that the development of our country is truly sustainable and that effective peace finally reigns.

Young people in the face of election-related unrest

For a very long time, young people have often been used by politicians or other people who want to sow conflict (such as the general strike after the 2002 elections). As young people, instead of being tools of conflict, let us try to be vectors of peace. Youth participation in peacebuilding brings us conservation, peacebuilding and national security.

There are many things that can happen before, during and after the election. And young people are in high demand. According to the testimonies collected, there are more and more young people aware of the conflicts that can arise during these periods. So they avoid arguments although they support different political parties. For them, it is the ideas that must fight and not the people.

Other young people decide not to support any political party but prefer to join an organization that works for the election like the KMF/CNOE. They integrate into this organization so that they can make their contributions to the election by raising awareness among Malagasy citizens to vote, because it is a right and an obligation too. And they take part as observers to see if fraud has been committed and to ensure that the election is going as it should.

All of this is really important, because it would be unfortunate if an electoral conflict like the general strike of January 2002 should happened again. Despite our diversity, let us always keep the peace.

(Thank you to Jay Ralitera for sending this article to CPNN)