An article by  Mohamed Kanouté in Mali 24 (translation by CPNN)

It was in a festive atmosphere that the 3rd Edition of the festival called Festi Petit, an initiative of Alagria Event and its partners, opened this Friday, May 14, 2021 at the Salamatou Maiga Sports Palace. 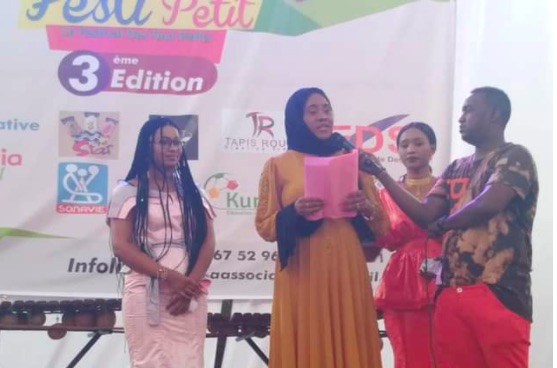 Objective: To instill in children the culture of peace, acceptance of the other and unity in its diversity because children are the future of this country. Also to arouse curiosity in children while developing their intelligence through attractive games.

The Festival was attended by communal authorities, local administrative authorities of commune IV of the district of Bamako and cultural actors.

A place of meeting, exchange and entertainment of all kinds between children, this third edition, which will last three days, has kept all its promises in terms of mobilization.

In a festive atmosphere tinged with cries of joy, children test their knowledge and intellectual capacity in attractive games to the delight of the parents who accompany them.

According to the director of the Festival Ms. Adam Samaké, Alagria Event launched the festival in 2018 as part of the development of their activities in favor of children.

“It is a festival dedicated to children without distinction with a blend of gastronomic entertainment and culture. The culture of peace, acceptance of others and unity in its diversity is our goal, because the future of the country depends on children,” she explained.

According to her, “Mali is currently going through a crisis which is shaking the very foundations of the country, and children today face the harmful consequences of this crisis, hence the idea for us to organize this festival to allow people you to recreate themselves and forget certain difficulties at least for a while ”

She also expressed the wish to perpetuate this initiative and especially to extend to children who are in the regions.