An announcement from the African Union Youth Envoy

As part of Youth Silencing the Guns Campaign “Advancing Youth Roles and Capacities to Silence the Guns” launched by the African Union (AU) on 24th July 2020, the Office of the Youth Envoy (OYE) in collaboration with partners provided grants to youth projects through Youth Silencing the Guns Awards to celebrate, elevate and recognise youth impact in the communities with concrete support to grassroots efforts, as well as amplify young peacebuilders initiatives and stories through wide platforms. A total of Four Awards issued under five categories granting each winner $5,000. 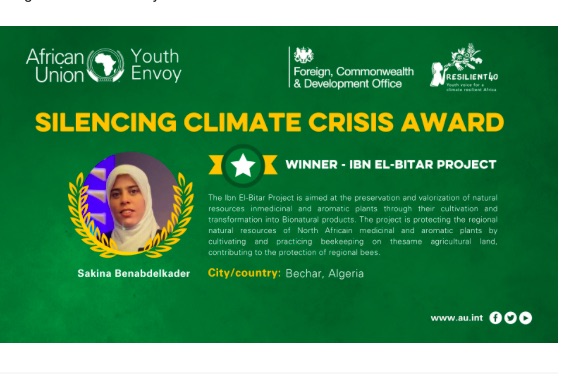 Congratulations to Ms. Sakina Benabdelkader from Algeria for winning the Award for Silencing the Climate Crisis. Her project, Ibn El-Bitar, focuses on protecting natural resources and wildlife linked to medicinal and aromatic plants and their transformation into Bionatural products. The projet is protecting the regional natural resources of North African medicinal and aromtic plants by cultiating and practicing beekeeping on the same agricultural land, contributing to the protetion of regional bees. 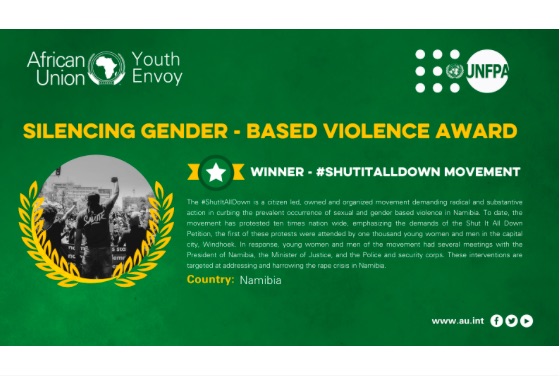 The #ShutItAllDown is a citizen led, owned and organized movement demanding radical and substantive action in curbing the prevalent ocurrance of sexual and gender based violence in Namibia. To date, the movement has protested ten times nation wide, emphasizing the demands of the Shut It All Down Petition. The first of these protests were attended by one thousand young women and men in the capital city, Windhoek. In response, young women and men of the movement ha several meetings with the President of Namibia, the Minister of Justie, and the Peace and security corps. These interventions are targeted at addressing and narrowing the rape crisis in Namibia. 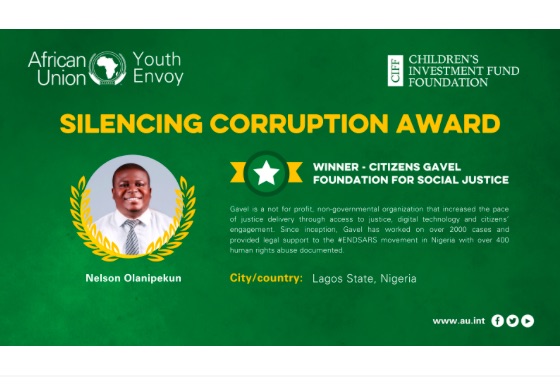 Project lead: Nelson Olahipekun. Gavel is a not for profit non-governmental organization that increased the pace of justice delivery through access to justice, digital technology and citizens’ engagement. Since inception, Gavel has worked on over 2000 cases and provided legal support to the #ENDSARS movement in Nigeria with over 400 human rights abuses documented. 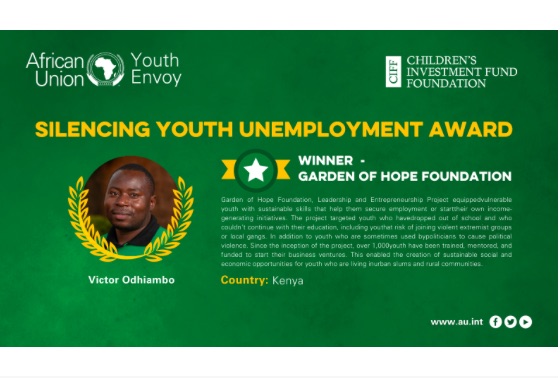 Project Lead: Victor Odhiambo. This Leadership and Entrepreneurship Project equipped vulnerable youth with sustainable skills that help them secure employment or start their own income-generating initiatives. The project targeted youth who have dropped out of school and who couldn’t continue with their education, including youth at risk of joining violent extremist groups or local gangs In addition to youth who are sometimes used by politicians to cause political violence. Since he inception of the project, over 1,000 youth have been trained, mentored, and funded to start their business ventures. This enabled the creation of sustainable social and economic opportunities for youth who are living in urban slums and rural communities.