An article from Diario Extra (translation by CPNN)

Congressmen from Argentina, Colombia, Mexico, Guatemala, Ecuador, Honduras and El Salvador are visiting the country to promote the value of tolerance and the culture of peace, fight against discrimination, religious sectarianism and ethnocentrism and to develop the norms of international law and human rights, to strengthen the principles of tolerance and achieve peace. The meeting of the Latin American and Caribbean Group of the International Parliament for Tolerance and Peace, takes place in our country from Wednesday the 16th to Friday the 18th,. 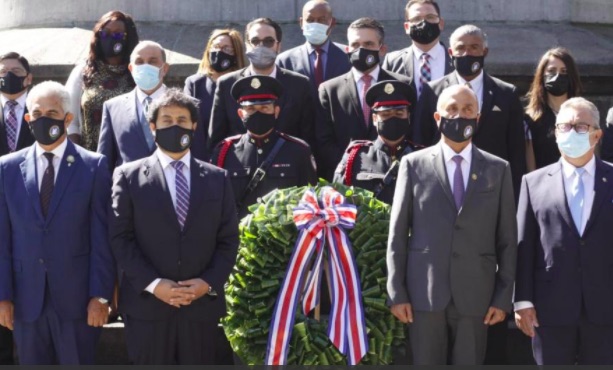 The representatives of the parliaments gathered in front of the National Monument, in the National Park to deliver a flower arrangement. (Photo David Barrantes).

Also, the Argentine Walberto Allende, President of the International Parliament for Tolerance and Peace.

On the part of the Legislative Assembly of our country, the hosts are the deputies David Gourzong and Jorge Fonseca of the PLN and Rodolfo Peña of the PUSC.

On Thursday morning they delivered a wreath in front of the National Monument, in the National Park to celebrate the opening ceremony of the meeting.

“We are proud to work with them on issues of peace, on issues of consensus in the world such as the health crisis, and on economic problems in the countries where we have to restore normalcy and to have access to vaccines,” said Gourzong.

This is the first official meeting of Duarte Pacheco, the new President of the Inter-Parliamentary Union (IPU), who was very excited about the opportunity to build an agenda for peace and tolerance in the world.

“Costa Rica is a small country, but a good example for the world with its culture of peace and building bridges between peoples. I am sure that important agreements will emerge from here to address the global challenges we now face,” said Duarte Pacheco.

For Rodolfo Peña Flores, who is also a member of the board of the fourth Permanent Commission on United Nations Affairs of the Inter-Parliamentary Union, the visit of Duarte Pacheco will serve to consolidate major international agreements to promote the comprehensive recovery of the countries.

“This will be a very important and enriching space for Costa Rica, where, through a vision of solidarity and humanity, we can strengthen and establish efficient instruments for the integral recovery of the countries. I am convinced that, through effective cooperation, we can consolidate good agreements to face global challenges and tostrengthen productive ties between different nations,” said the Christian Socialist.

“The election of Costa Rica has to do with its rich history with peace, more in the current moments that we are also living as a result of the pandemic that brought about a crisis in the governments of Latin America and in the world. That is why the decision to be here. We will leave happy and enriched with the recent history of Costa Rica for the benefit of the peace of the continent,” commented the Argentine Allende.