An article from Pagina Siete (translation by CPNN)

Vice President David Choquehuanca met on Wednesday with the Under-Secretary General of the United Nations Organization for Political Affairs and Peacebuilding, Miroslav Jenča, to “strengthen” the culture of peace. 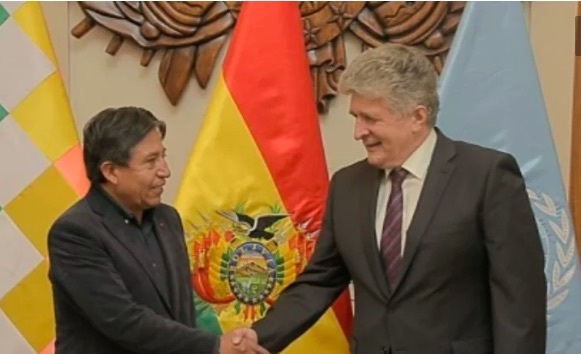 “We had a meeting with Brother Miroslav Jenča, United Nations Under-Secretary-General for Political Affairs and Peacebuilding for Europe, Central Asia and the Americas. We promote the culture of peace and dialogue, that is our path, the path of unity and brotherhood “, wrote the Vice President, through his Facebook account.

At the time of assuming the Vice Presidency of the State, Choquehuanca made several reflections with a view to seeking balance and the recovery of the rule of law with impartial justice and the full exercise of democracy, reported the state ABI.

“Bolivians see each other as equals and we know that united we are worth more, we are in times of being Jiwasa again. It is not a question of me, it is a question of us. Jiwasa is the opposite of self-centeredness,” he said on November 8, upon taking office.

The UN delegation is in Bolivia to consolidate peace, in relation to the acts of violence that occurred after the resignation of Evo Morales in 2019.