The following 19 events in 10 Arab and Middle Eastern countries were listed in Google during the week of September 21-28 under the key words “International day of peace” “peace day”, “journee internationale de la paix” and اليوم الدولي للسلام , and including one on the facebook page for the International Cities of Peace.

About 20 events are listed on the maps of One Day One Choir and Montessori schools singing for peace, but there is no indication which took place this year and which took place only in previous years 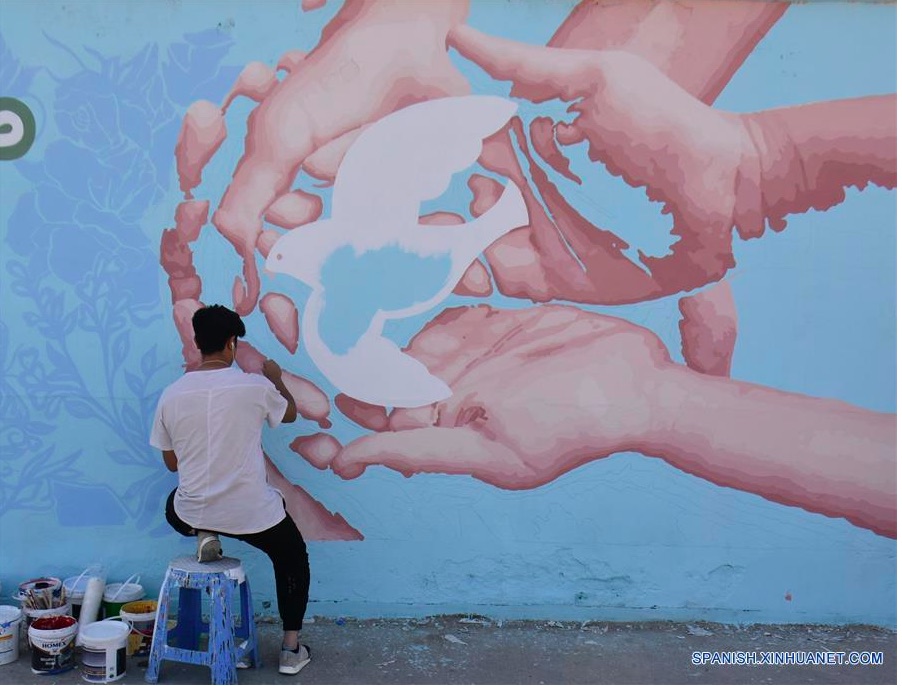 A young volunteer paints a mural to mark the International Day of Peace in Mazar-i-Sharif, Afghanistan

Photo report from Xinhua News Service: A young volunteer paints a mural to mark the International Day of Peace in Mazar-i-Sharif, capital of Balkh province, Afghanistan.

The participants in the national conference on solidarity and constant support towards the Palestinian and Sahrawi peoples, stressed Monday in Algiers on the imperative to apply UN resolutions and decolonize Palestine and Western Sahara, emphasizing warns against the dangers of delay in ensuring both peoples their right to self-determination. Organized by the Algerian National Committee for Solidarity with the Saharawi People (CNASPS), in coordination with a network of Algerian journalists, the Mechaal E-chahid Association and the SADR embassy, ​​this national conference, celebrated on the occasion of The International Day of Peace, September 21 of each year, was an opportunity for speakers to advocate for the need to compel Moroccan and Israeli colonizers to conform to international legitimacy.

The League of Arab States called on all nations and peoples, especially the Arab countries that are experiencing armed conflicts, to immediately cease fire and abide by the cessation of hostilities and resort to a political solution as it is the only way to settle conflicts and disputes. In a statement today on the occasion of the celebration of the International Day of Peace, which falls on the 21st of this month, the Arab League affirmed its full support for the efforts undertaken by the United Nations to promote sustainable peace, including its commitments to preserving and building peace and its keenness to establish a strategic partnership with the international organization to prevent the outbreak of Conflicts and resolution. The Arab League also called on all peoples to work on building and spreading a culture of peace by establishing a set of values and behavioral patterns based on respecting human rights, rejecting violence in all its forms and forms, strengthening the rule of law, adhering to the principles of democracy, freedom and justice, spreading the values of tolerance, acceptance of others, multiculturalism, and promoting dialogue.

Dr. Nabil Helmy, Secretary-General of the Heliopolis Association, said that the association participates in the celebration of the International Day of Peace, which falls on September 21 of each year, under the slogan “Forming Peace Together”, by launching it today, Monday, and through the page and website of Heliopolis Library, a photo gallery Hypothetically for the Interfaith Complex in Ancient Egypt, that part of the land where the three monotheistic religions come together to send a message of peace and love to the world.

The Municipal Council in Tehran honors the International Peace Day tomorrow, Monday in the Hall of Iran, and at this ceremony, in addition to exchanging views on peace, the book “Women and Defending Peace in the Post-Corona Period” will be unveiled.

On the occasion of the International Day of Peace, the International Center for Human Sciences, UNESCO Byblos, in partnership with the German Hans Seidel Foundation, on Monday, September 21 and 22, held training workshops on the importance of dialogue and peace building with the aim of refining and developing personality and social responsibility towards others with the participation of academic and cultural figures and lecturers from various universities in Lebanon And lecturers from France.

Department of the Joint Mission of the United Nations and the African Union (UNAMID) and the Center for Peace and Development Studies at the University of El Fasher on the occasion of the International Day of Peace, which falls today, signed a pledge to work together achieving the requirements of peace and democratic transition in Darfur. Professor Adam Saleh Muhammadin, Director of the University of El Fasher, addressed the opening session of the forum.

The Sudanese Council of Churches and the Council of Religious Coexistence organized today at the Council’s headquarters in Khartoum a solidarity stand on the occasion of the International Day of Peace, which falls on the twenty first of September of each year under the slogan (Blessed are the peacemakers because they are the children of God called) under the auspices of the Minister of Religious Affairs and Endowments Nasreddin Mufreh

On the occasion of the International Day of Peace, celebrated on Monday, September 21, which coincides with the second anniversary of the Revitalized Agreement on Conflict Resolution in South Sudan (RARCSS), representatives of various faiths in Sudan of the South, in a collective statement, noted “with great concern” the slow pace of the implementation of RARCSS and expressed the need to “accelerate the implementation of the provisions of the agreement..

On the occasion of the celebration on September 21 of the International Day of Peace, the theme of which 2020 is “Shaping peace together”, the National Heritage Institute (INP) and the agency for the enhancement of heritage and cultural promotion (AMVPPC) organize in collaboration with the friendly staff of the INP a series of activities and events in five museums in Tunisia.

Video report: “Living in peace is our legitimate right” .. A peaceful pause in the city of Atarib in the countryside of Aleppo on the International Day of Peace

The “Southerners for Peace” group commemorates the International Dy of Peace and finds this ocasion an opportunity to renew its demands for peace in Yemen.

Under the title “On This Land What Deserves Life”, the mural exhibition coinciding with the International Day of Peace was executed by a number of plastic artists on the wall of the Martyrs’ Stadium, located in the Jahmiliya neighborhood, which is the largest neighborhood that was destroyed.    Those in charge of the mural said that its aim is to deliver a message to the international community that Taiz is tired of the war and siege that it has been living for years, and that it seeks peace and coexistence.    Over the past two days, the organization has launched several activities in the governorates of Ma’rib and Hadramawt on strengthening the capacities of youth initiatives in peacebuilding, to celebrate the International Day of Peace, with the participation of 28 young men and women representing 14 youth initiatives in the two governorates.

We celebrate the international day of Peace and as participation in our community we always take care people whom has special case and the current situation in Yemen increased their suffering. Hence we performed our activity with autism children at the Charter for Compassion Yemen Autism Center in Sana’a and the team of United Religions Initiative. This is the first time that children with autism in Yemen celebrate this occasion.

On this international day of peace, let us shape peace together, recognizing and supporting the important role of local women mediators in community based conflict resolution efforts. In Yemen, women peacebuilders have used their conflict resolution skills to prevent local conflicts, promote social cohesion and women’s participation in community and social initiatives. PartnersGlobal and its affiliate, Partners Yemen, collaborated in a community-based conflict mitigation program to create sustainable mechanisms for local conflict resolution in Yemen’s tribal areas. The program supported local women peacebuilders in: coaching on mediation approaches to proactively address and reduce violent conflict, creating the space and opportunities for women to engage in conflict resolution, and building women’s knowledge and capacity in conflict management, mediation, arbitration, negotiation, and communication.

On the occasion of the International Day of Peace, a youth campaign calling for a ceasefire throughout Yemen has been launched. Under the hashtag #EnoughWar, the campaign uses social media to call for a cease-fire in Yemen. In line with the theme of this year’s International Peace Day, “building peace together”, the campaign is mobilizing young people to play a role in the peace process and amplifying the voices and opinions of young women and men calling for peace. The campaign kicked off with a vox pop video in which young people share their messages on peace: