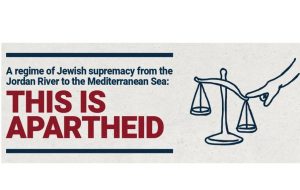 We have previously reprinted remarks by Nobel Peace Laureate and Bishop Desmond Tutu comparing the Israeli occupation of Palestine to the South African Apartheid regime prior to the election of Nelson Mandela as President.

Now, we reprint an analysis of the “Jewish Nation-State Law” which may be considered as the official establishment of Israeli Apartheid.

The Israeli parliament passed the “Jewish Nation-State Law” in the early hours of Thursday morning [July 19, 2018], defining Israel as the exclusive nation-state of the Jewish people and demoting the official status of Arabic.

Almost immediately, Palestinian politicians and rights groups began speaking of the legislation in the starkest of terms. PLO Secretary General Saeb Erekat said the law “turns a ‘de-facto’ Apartheid regime into a ‘de-jure’ reality for all of historic Palestine.

Hassan Jabareen, head of the Adalah, the Legal Center for Arab Minority Rights in Israel, said the law “features key elements of apartheid” and that by passing it, Israel has “made discrimination a constitutional value and has professed its commitment to favoring Jewish supremacy as the bedrock of its institutions.”

According to Adalah attorney Fady Khoury, the legislation entrenches the identity of the State of Israel as a state for the Jewish people, turning them into the sovereign while excluding the Palestinian population from the same definition of sovereignty.

“The law itself does not mention the word democracy even once,” Khoury explained. “Psychologically, it will have a huge impact on Israelis when they are called to determine what it or isn’t democratic.”

+972 Magazine spoke with Khoury to better understand the apartheid comparison, and why the law is so problematic in general.

[The following interview has been edited for length and flow.]

People are calling this the ‘apartheid law.’ Why?

“Apartheid in South Africa was a process. It was a system that took years to develop and was built on the work of academics and theologians who had to create justifications for white supremacy. It was system of hierarchy, in which there is one group with all the power and another without any power.

“In Israel, the new law explicitly defines the Jewish people as the only group with the only right to self-determination, while negating the rights of the indigenous people. This creates a system of hierarchy and supremacy. We do not live in a time in which explicit calls for supremacy are legitimate as they were in South Africa, but we are reaching the same result through different language.

“The analogy between Israel and South Africa is not only about separate communities or roads, it is about a state of mind. It is about the idea of ranking different groups. It is the idea of a regime of supremacy that serves the interests of one group, even if it comes at the expense of the most basic rights of another. We don’t have to keep looking for policies that resemble Jim Crow — that mindset exists not only in the periphery of Israeli politics but also in the mainstream.”

The original wording of the bill included a clause that allowed for communities to be segregated along religious or ‘national’ lines. What does the final version say about segregation?

“The previous version of the bill included a clause that allowed the state to authorize new communities based on religion or nationality. It was based on the principle of ‘separate but equal,’ which was couched in the idea that doing so would be good for everybody — Jews or Palestinians. The language was changed since it was too close to the kind of blatant segregation we have seen in the U.S. They rewrote the clause so that the state would ‘promote Jewish settlement.’ This creates a whole different kind of paradigm for segregation, one of “separate but unequal.”

“Think about it this way: imagine if the United States passed legislation that promoted ‘white settlement’ — we would cringe. But after 70 years of a Jewish and democratic state, the idea of Jewish settlement has become so mundane that it does not seem problematic. In that sense, the change is cosmetic. But what the right wants to achieve is the same: Judaizing the country while incentivizing building communities for Jewish citizens only.”

What are the potential effects this law could have on the legal system?

“[The law] will be foundational. It becomes a source of interpretation of the laws and the legal system. The ramifications are not going to be limited to a few areas: they are going to affect the legal system at the root, especially if the right continues to appoint conservative justices to the Supreme Court, which will use this new constitutional norm to interpret the law.”

Is the new law an acceleration of a process that has been taking place here recently, or does it enshrine a discriminatory regime that has always existed here?

“I think we are seeing an escalation that did not begin with the new Basic Law, but rather is a result of the contradiction between the fundamental identities of the state as Jewish and democratic. What we are seeing now is Jewish identity encroaching more and more on the social and political life of Israel’s citizens, while the ‘democratic’ identity of the state is experiencing a regression.”

Amnesty International: Pattern of Israeli attacks on residential homes in Gaza must be investigated as war crimes

Outraged at apartheid Israel’s crimes against Palestinians? Here are 5 things you can do.

Israel and Palestine : An update on the BDS movement

The B’tselem Report on Israeli Apartheid