Under the title “(Re)imagine our world: Action for Peace and Justice”, participants from around 70 countries will attend the meeting of the international peace movement and other social movements, with renowned activists and experts. 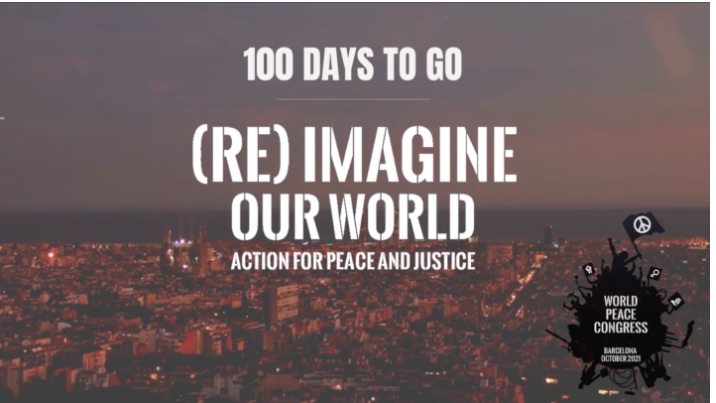 The congress will have a hybrid format, with face-to-face activities, conferences, workshops and cultural events, but with the possibility of following many of them online.

Under the title “(Re)imagine our world. Action for Peace and Justice”, participants from around 70 countries will attend this event with face-to-face activities, conferences and workshops, most of which will take place at the CCCB (Center of Contemporary Culture of Barcelona).

The main goal of the congress is to invigorate international pacifism and peacework, offer a meeting point for different actors, redefine action for peace, and, as the motto of the congress says, reimagine the world through the prism of a culture of peace.

According to the IPB Co-President, Philip Jennings, the congress aims to be the largest gathering of activists for peace in 2021, the year that the United Nations has declared the International Year of Peace and Trust. “It’s also a big year for IPB, as we celebrate our 130th anniversary and as we approach the 40th anniversary of the Olof Palme report on common security; the time has come to develop a new blueprint for common survival”, he adds.

“The IPB World Peace Congress in Barcelona will allow so many of us to meet in person for the first time in almost two years. Networking among peace and disarmament activities in different countries and regions is our most essential resource”, says Lisa Clark, IPB Co-President.

During the three days of the congress, there will be talks and lectures by more than thirty speakers. Featured names include Noam Chomsky, Martin Chungong, Jeremy Corbyn, Beatrice Fihn, Wada Masako, Vandana Shiva and Jody Williams.

A congress with a long history

In 2016, the World Congress returned with the idea of putting disarmament on the global agenda. This first congress of this new stage took place in Berlin, and now the continuation will take place in Barcelona five years later.

The IPB has their headquarters in Berlin and offices in the Catalan capital and Geneva.

“Barcelona is a city of peace – one of the few in the world with an organized and resourced commitment to promote and campaign for peace – and it has opened its arms to the IPB, with both the city and the region playing an active role in preparing for the congress”, says Jennings.

The city is the home of one of the congress hosts, Centre Delàs, an IPB member and a hive of peace, research, and campaigns regionally and globally. The IPB has a unique presence at Centre Delàs, where the Global Campaign on Military Spending (GCOMS) is based and animated.

The co-organiser of the Barcelona Congress is the ICIP, a research, dissemination and action organisation created by the Parliament of Catalonia in 2007 to promote peace in Catalan society and internationally and make Catalonia play an active role as an agent of peace in the world.

If you need photographs, videos or other materials, you can access this link: https://trello.com/b/MPBI8oQZ/wpc2021