An article by Nancy Castro in eju! (translation by CPNN)

The deactivation of “polarizing discourses” and the creation of an effective space for peace through the media is one of the three conclusions of the “International Seminar of Experiences for the Encounter”, organized by the Vice-Presidency of the State, United Nations and International Cooperation. The event, which took place on June 22 and 29, set out the objective of generating spaces for dialogue to strengthen peaceful coexistence in diversity. 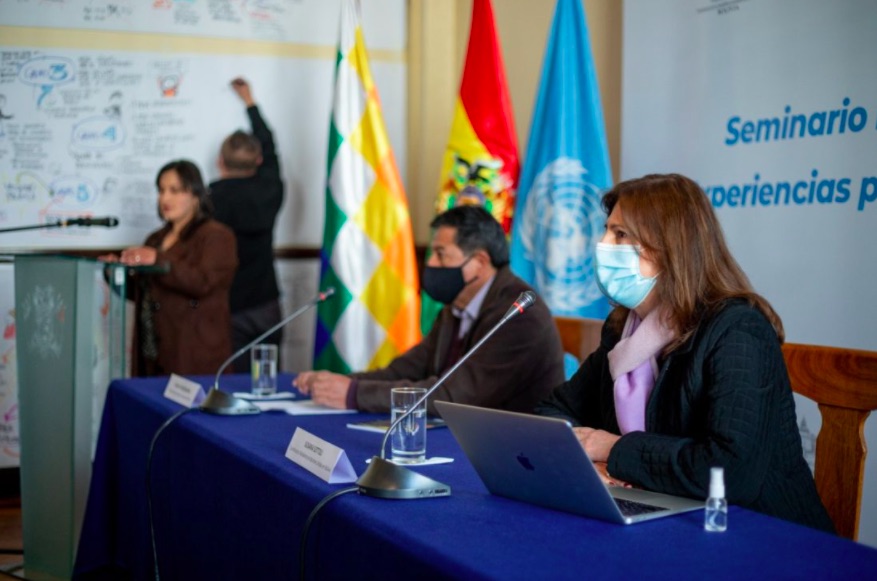 The Vice President of the State, David Choquehuanca, in the closing speech, referred to the crucial role played by the media. “The role that the media has to play is very important, some perceptions have been gathered that the media, in some cases, like to feed the confrontation, they are looking for contradictions,” said Choquehuanca.

The other two pillars are “political will” and an “inclusive and participatory” agenda.

Regarding the first pillar, it was highlighted that the role of the government and civil society organizations is fundamental to promote a dialogue beyond differences. “Political will is essential for the construction of spaces for dialogue. We must become aware that the reunification is not just an event, but a sustained process over time, which requires the decided commitment of the leaders, “concluded one of the working groups.

The second pillar aims to open participatory meetings with an agenda that reflects the diversity of the country focused on common challenges, such as the fight against discrimination, inequalities and the eradication of violence. “The challenge is to avoid the monopolization of the debate in political spaces.”

Regarding the third pillar, the experts emphasized finding a favorable context for dialogue, “deactivating polarizing discourses”, and giving more space to voices that seek to build and achieve a peaceful equilibrium, a task for which the media is partly responsible.

“It is important to understand that our problems are deep and that working on these issues requires first, deactivating the feeling of threat to enable our voices,” concluded another of the work sessions.

On Tuesday, June 22, the first was held with international participants including Rigoberta Menchú Tum, 1992 Nobel Peace Prize winner, who explained that peace is not built only in meetings, but that it is necessary to build a culture of peace.

For her part, Vera Grabe, politician, ex-guerrilla commander and member of the Observatory for Peace in Colombia, stressed that peace is more than a speech, a policy, a matter for politicians, since what is really required is to dismantle violence in our practices.

There was also the participation of Carlos Borth, who spoke about the political agreements for the institutional reform of 1993, Griselda Torrico who spoke about the conflict of boundaries between the communities of Coroma and Quillacas and Carlos Romero, who related his experience around of the constituent agreements that made a new Political Constitution viable in 2009.

The participants presented their conclusions based on the experiences of national and international experts, which were received by Choquehuanca and Susana Sottoli, resident coordinator of the United Nations System in Bolivia, to build a proposal for a “National Process for the Reunification”.

“We have become aware that we can contribute, from our embassies, as people, as professionals, as representatives or as authorities to build unity, to build brotherhood, to contribute to the construction of peace.”

During the post-electoral conflicts of 2019, members of the citizen platforms that denounced electoral fraud decided to peacefully take over state radio and television. At that time people accused these media of lying, misinforming and fueling the confrontation.