An article by Dharna Noor in Gizmodo

The petrochemical industry produces more than 88 million tons of polyethylene, making it the most common plastic in the world. Scientists have found a new way to upcycle it, according to a study published in Science on Thursday. It could help deal with the growing plastic pollution crisis. 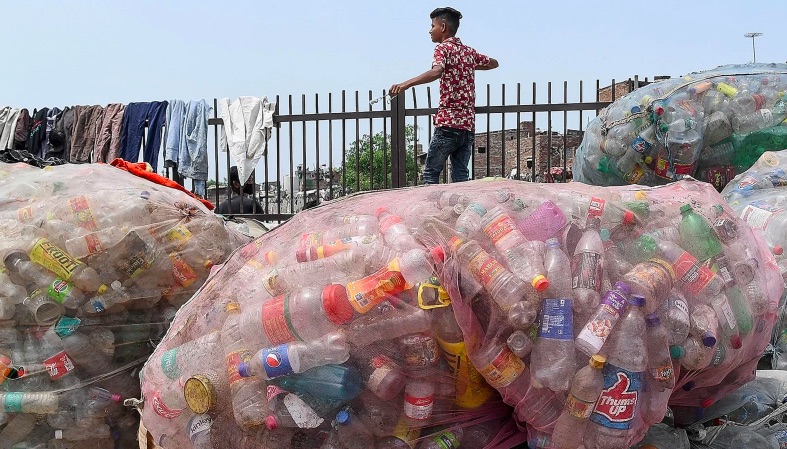 This could all be turned into useful chemicals. Photo: Prakash Singh (Getty Images)

Polyethylene comes in several different forms and is used in everything from plastic bags and food packaging to electrical insulation and industrial piping. Since it’s so common and our recycling system is so broken, we end up throwing away a shitload of the stuff. It can end up in landfills or the ocean where it breaks down veeeery slowly, or get burned up in waste incinerators that emit toxic chemicals.

But in the new study, the authors found a way to speed up the process of breaking down polyethylene and turn it into alkylaromatic molecules, which are used as surfactants in cosmetics and laundry detergent, lubricants for machinery, and refrigeration fluids.

“Globally, it’s a $9 billion market today,” Susannah Scott, a chemical engineer at University of California, Santa Barbara who co-authored the study, said in an email in reference to alkylaromatic molecules. “There is economic value and scale here.”

This isn’t the first time scientists have figured out how to break down polyethylene—there are other methods of chemically recycling the material. But conventional methods of breaking the plastic down require heating it up to temperatures between 983 and 1832 degrees Fahrenheit (500 and 1000 degrees Celsius) and using solvents or added hydrogen to speed up the process.

By contrast, the authors’ new method only requires heating it up to around 570 degrees Fahrenheit (300 degrees Celsius) and uses no solvents or added hydrogen, instead relying on only a comparatively gentle catalyst of platinum with aluminum oxide. Their process helped disassemble the plastic’s polymers in a less rough manner, allowing them to extract the valuable intact alkylaromatic molecules. Scott said the catalyst works to “cut the bonds which hold the polymer chain into smaller pieces,” eventually turning the solid plastic into a liquid they can extract the valuable chemicals from.

The authors’ new process is far less energy intensive than other means of breaking down polyethylene. That’s good news for the environment. It’s also cheaper, which is good news for companies who may want to scale this up. The technique isn’t ready for that scaling up just yet, but the discovery could eventually be used to give plastics a new life as valuable raw materials instead of as polluting waste.

“We dig a hole in the ground, we produce, we make, we use, we throw away,” Mahdi Abu-Omar, a chemical engineer at University of California, Santa Barbara who co-authored the study, said in a statement. “So in a way, this is really breaking that way of thinking. There’s interesting science to be done here that will lead us into new discoveries, new paradigms, and new ways of doing chemistry.”

To be clear, this new method should in no way give the petrochemical industry license to produce even more plastic. Though it’s great to have a better alternative to tossing it out, the creation of polyethylene also threatens public health through toxic emissions as well as the climate. We still need to be working to wean the world off of plastic production and consumption in the first place. But the new technology could help play a role in eventually reducing the amount of waste that gets produced and help clean up the mess we already have on our hands.